Matty Lee and Noah Williams became Team England’s fourth diving gold medallists of the Birmingham 2022 Commonwealth Games – and revealed they had done it while battling cramp.

Williams required physio treatment in between dives as he was struggling to walk, which makes their victory even more impressive.

Lee admitted he had achieved something he had always wanted to do after the English duo triumphed in the Men’s Synchronised 10m Platform in front of a home crowd at the Sandwell Aquatics Centre.

They briefly dropped to second place after round four but were leading going into the final round and sealed their gold with a third 84-point dive of the competition to finish with a score of 429.78.

That was 15.93 clear of the Canadian duo of Rylan Wiens and Nathan Zsombor-Murray, with Australia’s Domonic Bedggood and Cassiel Rousseau third.

“That’s my first ever Commonwealth medal and that’s something I have always wanted to do.

“I have done quite well in my career but the Commonwealths is always one that I have wanted to do well at. I’m just so happy that me and Noah came out on top today.

“It wasn’t comfortable one bit. We have never competed in front of a crowd like that and probably might not experience that again – that was insane.

“We were both dealing with cramp in our calves after the second dive – I don’t really know why.

“We think it was because of the adrenalin  Mine managed to go away a bit but Noah in between rounds was going and getting physio.”

“Mine got worse and worse to the point where I was struggling to walk which is why I had to get the physio between each dive.

Managed to keep it cool 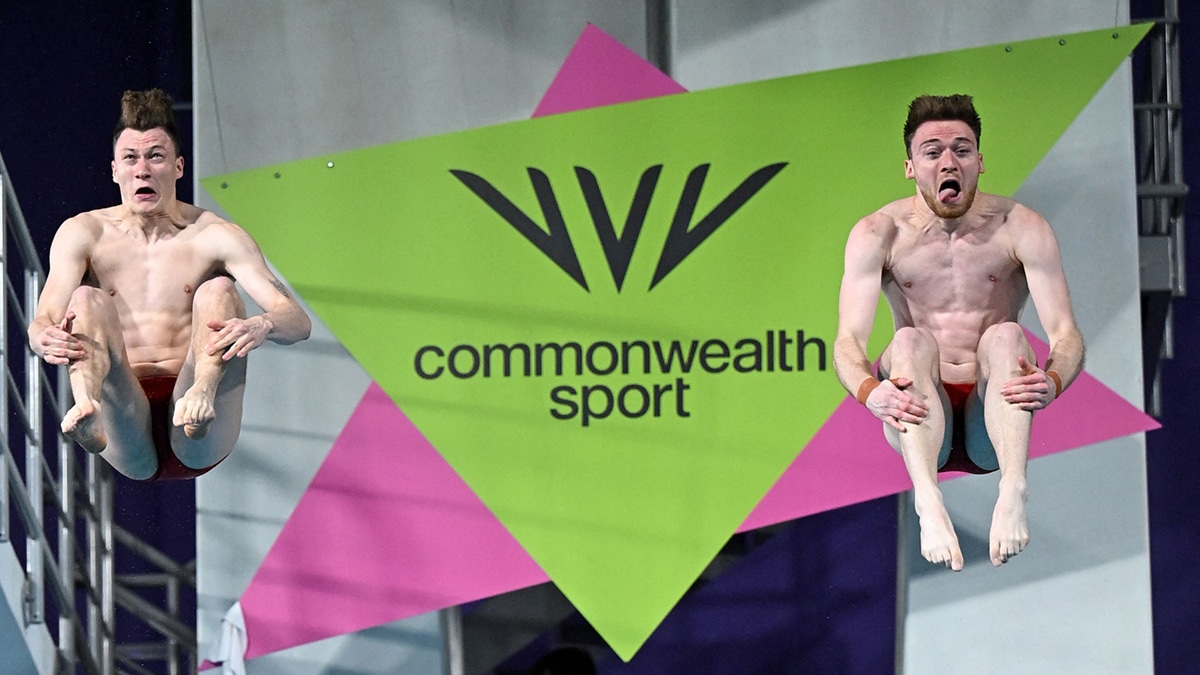 “I put a lot of pressure on myself, I don’t know about Matty, because we are trying to win.

“Halfway through, we kind of realised what was going on and my body was like ‘oh, nah I’m not having it’ but we made it through, we obviously got the gold – which is what we came here to do – so we’re really happy.”

Olympic champion Lee said: “It was a weird one as I have never experienced cramp in an actual comp.

“I guess I just downed a bottle of water and it kind of did fade away.

“That was a situation we have never dealt with before so these things can happen.

“That’s why you don’t want to be too regimented in what you do but we dealt with it exactly the way we wanted to and managed to keep our heads in the zone because that was not an easy comp.

“The Canadians, the Australians and the second British pair were really good so we knew what we needed to do.”

Lee added his target following the Tokyo 2020 Olympics was to add Commonwealth gold to his medal collection – and he was quick to praise the crowd having put pressure on himself ahead of the Games.

He said: “An Olympic gold is kind of the biggest achievement you can get as an athlete – that was a bit of a shock obviously but this is something that I have always wanted.

“That was the main goal coming back to training after the Olympics.

“I knew the Commonwealths was coming home to Birmingham and I knew we had a very good chance to get a medal, and a gold medal, so it adds to the accolades and I’m just very happy.

“We didn’t get the crowd at the Olympics, which came with its benefits as the crowd does put pressure on you.

“I put a lot of pressure on myself as I knew it was going to be amazing and I felt that vibe and that love and that appreciation from all those people who come out to watch us.

“It’s exactly what I expected and I’m very happy we managed to keep it cool and come out on top.”

Kothari praised the performance of Lee and Williams, which they train with at the London Aquatics Centre.

He said: “We get to see them in action every single day. They are spectacular to watch. They very, very rarely make any mistakes.

“It’s something we aspire to be like and grow together.

“We went in knowing we would have to execute everything perfectly on our dives without the level of difficulty with the Canadians and Aussies being strong teams.

“We were almost there. We were 20 points away with two slight mishaps.

“We need to add some difficulty so next time we medal. We had a 109 in our list but took it out a few days ago. It might be back in for the European championships in Rome.”

Cutmore said: “Next season is my season to build on the list.

“We’ve only been diving together since spring. This is our first season. We’ve done three competitions together now.”