Following on from a very busy 2016

Following on from a very busy 2016, with highlights of a double English channel relay in a time of 19 hours 23 minutes and a bronze medal at the European Masters open water 5k in Croatia I decided that in 2017 I would be a little more selective of the open water events I took part in.

Having said that, I could not keep away from my first competition of the year and probably the best open water series I have ever done; Bestfest, Majorca in May.

This year was my fourth visit to the beautiful area of Colonia Sant Jordi – an event for the whole family where, over the course of a week, there are eight events of varying distance and challenge.

I did my usual Colonia Classics which consisted of a 1.5, 5 & 10k, swimming in the beautifully clear, warm water alongside elite athletes from across the globe.

Although there is a very competitive side to this event, the family friendly atmosphere is also promoted and enjoyed. It is also a great way to kick off your open water season with water temperatures of around 18 degrees.

In July, I ventured south to swim for a second year in a row around Brownsea Island, Poole. The event that sells out in around 10 minutes of opening has become a favourite of mine. You actually swim around something which gives a huge sense of achievement.

The 6.5k tidal assisted swim covers some areas of natural beauty and while I swim, the kids enjoy the National Trust Island, which is accessed by a 10 minute ferry ride from Sandbanks.

Some 350 take part with categories for skins and wetsuit. Unfortunately, I was unable to retain my title as fastest non-wetsuit female, coming second to Naomi Vides. It was to be expected – the 19-year old successfully swam the English Channel the following month! 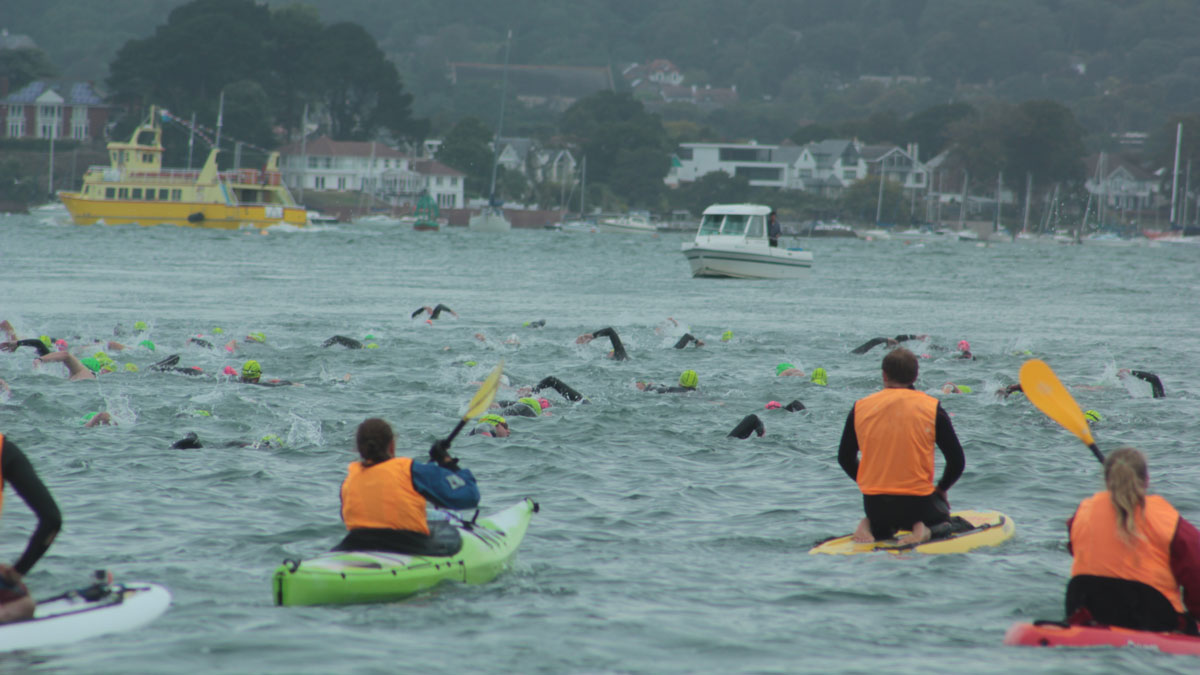 My final open water outing of the year was the 10k Dart, an event many of my friends have done and raved about.

This event attracts 1,600 swimmers over a weekend and the route meanders down the River Dart, starting at Totnes finishing in Dittisham.

Having not worn a wetsuit for several years I was reluctant to start, so I asked permission to swim skins and provided the necessary evidence of my ability to do so.

However, as the day came closer and my training had been mainly pool-based, I became a little anxious as to what I was letting myself in for.

Being another tidal assisted swim, I thought I should be okay.

As I was travelling a fair distance, I decided I would volunteer on the Saturday, which was a great experience and made some good outdoor swimming society friends along the way. The day was mainly dry and sunny and a great atmosphere.

Unfortunately, the weather changed and Sunday provided some challenging conditions of wind and rain. I had heard that the coldest part of the swim was at the start and I was so pleased to have known that or I may have considered getting out when I ventured into the water at Totnes; it took my breath away and it took a while for my breathing to calm down.

It was the first ‘point to point’ 10k I have done and I did find it a bit disorientating along the way. I took full advantage of the two feed stations, stopping to gorge myself on jelly babies which cost me dearly when I learnt that my time was 2 hours 00 mins and 12 seconds!!!

I did get over my disappointment when I found out I was the fastest female of the day out of both wetsuit and skins.

So as the waters are cooling down and the nights drawing in, I reflect on another great year and look ahead to what 2018 may bring … I have already booked to return to Bestfest, will attempt to get into Brownsea again and am excited at the Channel Relay race in September when my police team take on the RAF, Navy and Army teams.