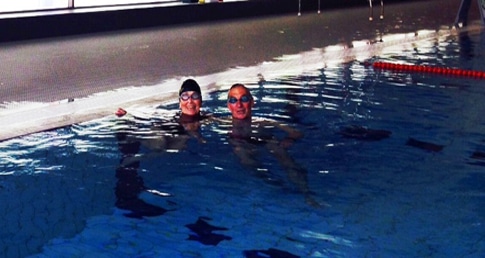 On Wednesday 13 May, 80 year old Gillian Burrell and her husband Roger attended their first Dementia Friendly Swimming session at Chester-le-Street Leisure Centre pool in Durham, where the new swimming initiative was recently launched.

Once a champion butterfly swimmer in France, Gillian was formally diagnosed with Alzheimer’s disease in 2014, and despite this she continues to show incredible athletic ability.

While Gillian has continued to thrive in other areas of her sporting life however, husband Roger explains how dementia made swimming a challenge: “With indoor rowing competitions, I can be right next to her and talk her through things, but swimming is obviously very different.

“Gillian absolutely loves swimming, but with the onset of dementia she struggled to stay in the lanes and would forget to turn at the end of the pool, which would be really frustrating for her. We swim at Chester-le-Street pool twice a week and I’m glad I can be there to support my wife, but being able to give her independence in a busy public pool surrounded by people who aren’t aware of her condition is hard.”

The Dementia Friendly Swimming project, which aims to enhance the swimming experience of those living with dementia and their carers, targets the pool environment while delivering low intensity exercise, relaxation sessions and structured motivational swimming lessons.

Speaking of the session, Roger said:

“Everyone seemed to enjoy it and the best thing was knowing that everyone there – from the staff to other swimmers – was aware that there were people with dementia in the pool. Staff were attentive and had thought about the support that was needed not just in the pool, but outside the changing rooms too.”

For Roger and Gillian, the value of the sessions lie in their ability to generate public awareness of dementia, and create an environment that allows those living with the condition more freedom in the pool.

“There’s a definite need for sessions like these nationwide so that people living with dementia can still enjoy swimming with a sense of independence. Help was at hand but it wasn’t patronising. Gillian and I are really glad that the project is being rolled out to other areas and we’re pleased about the launch of the Manchester project last week. We plan to attend more of our local sessions in the future.”