The City of Bradford and the City of Leeds both won gold in the opening session of the 2022 Swim England Artistic Swimming Combo Cup.

Leeds took victory in the Division One 13-18 Years competition to put them top of the overall Combo Cup standings after the opening two events.

The win earnt them eight points, adding to the three points that they earnt in the Division One, 9-15 Years earlier in the session when they finished seventh.

They also picked up one bonus point after the Division One 9-15 team fielded ten swimmers for their routine.

It gives Leeds the early lead in the hunt of the Combo Cup with eleven points just ahead of Gateshead who are second on nine and the City of Bradford in third on eight after their gold in the opening event.

On the performance Lead coach Ross Large said: “It was a very good swim, it’s the best I’ve seen them do.

“They’ve worked incredibly hard for it as all the teams have been but I’ve put them through their paces and it’s paid off.

“We had a competition a few weeks ago which sadly I wasn’t able to go to so it was really good to see them swim today in what is my last competition with the City of Leeds as well so it’s a great way for it to end on.

“I think they’re very shocked as we kept it a bit of a secret that they’d won gold until the ceremony.

“They swam last so they got out and they weren’t really too sure, they didn’t quite hear the score come through.

“So they walked out to the podium and they found out it was gold which was a great moment. 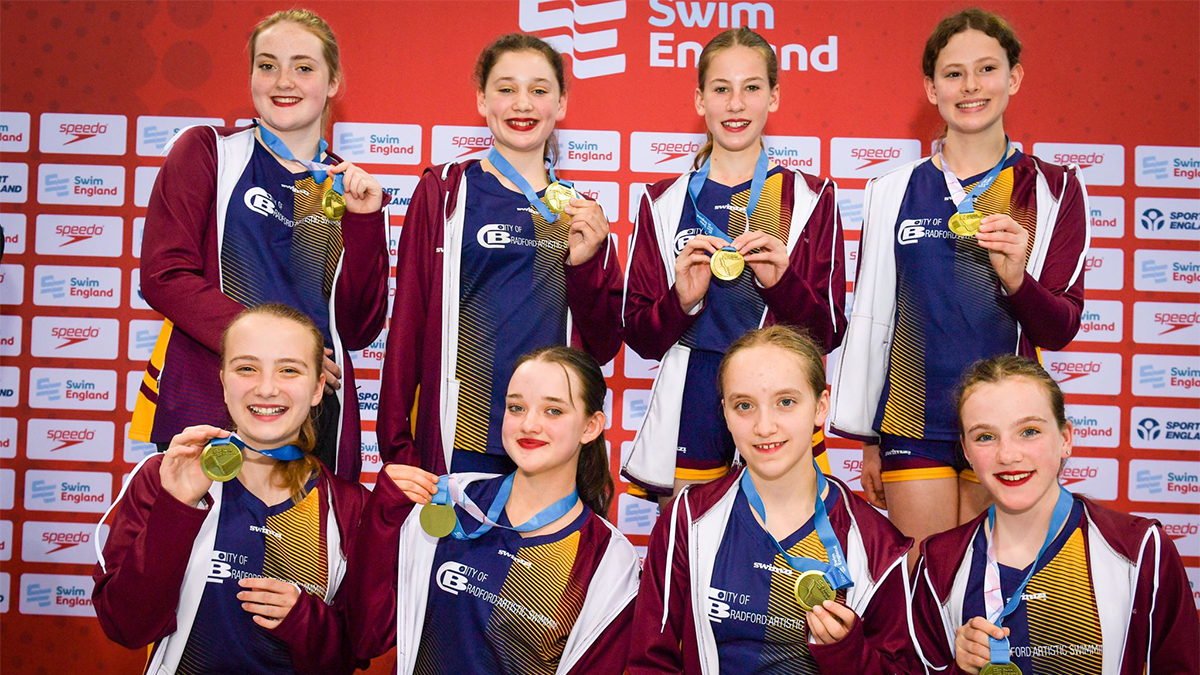 Bradford took gold in the first competition of the 2022 Combo Cup with gold in the Division One 9-15 Years event.

Bradford’s win saw them claim eight points for their effort in the race for the Combo Cup after scoring 55.000 for their routine to take gold.

Bradford scored 16.5 for execution, 22 for artistic impression and 16.5 for difficulty for their routine that was the joint highest in the competition.

A good performance from Gateshead SC (team one) gave them second place with a score of 53.7667 with Portsmouth Victoria taking bronze (53.2333).

Coach Joelle Carlespie was proud of her team, praising their hard work throughout the pandemic

She said: “They did really well, they made a massive improvement on the last competition so I’m really proud of them.

“This is our third time winning the gold in this category as we don’t include last year so we’re really happy and proud of ourselves.

“After the years that they’ve had, we’ve all been meeting on zoom during the pandemic and they just continued to work hard even though they didn’t have a swimming pool.

“Our pool in Halifax got closed down so we’ve had a tough time but this team just works so hard and they’re amazing so they really deserve this.

The team were excited to be back at the event with swimmer Edie Carris adding: “The atmosphere in this pool is thrilling, there’s so much adrenaline and just good vibes.”

You can see the full Combo Cup standings here.