No sinking feeling for Jim Carter when synchronised swimming

Downton Abbey star Jim Carter tells Ian Whadcoat how he struggled to get that sinking feeling when filming Swimming With Men.

If you were asked to name a vital accessory for synchronised swimming, a nose clip would no doubt instantly come to mind.

But for Swimming With Men star Jim Carter, he needed another extra piece of equipment to help him complete some of the scenes.

“I’m not very flexible because I’m ancient,” said Downton Abbey actor Jim, who plays the role of Ted in the new British comedy film. “But I am incredibly buoyant – I’m like a cork.

“The impossible shot for me was sitting at the bottom of the pool. I had 5kg of lead weight in my trunks to get me down there.

“We had to lie flat on our back, kick our feet up in the air and sink down and I could not do that at all. It was never, ever going to happen.

“When I was on the surface, I could relax. I did not have to move anything while the others were panting trying to stay afloat.

“People did hang off me when they were a bit tired.”

Jim was no stranger to synchronised swimming having watched it at the 2012 London Olympics – but despite that, he still found it a challenge.

“I have never been so tired in my life,” he said. “We had three hours’ training every day and I could barely move at the end of it.

“It was hard work but good to do different things.

“I’ve always liked synchronised swimming – and I have a lot of respect for those that do it. 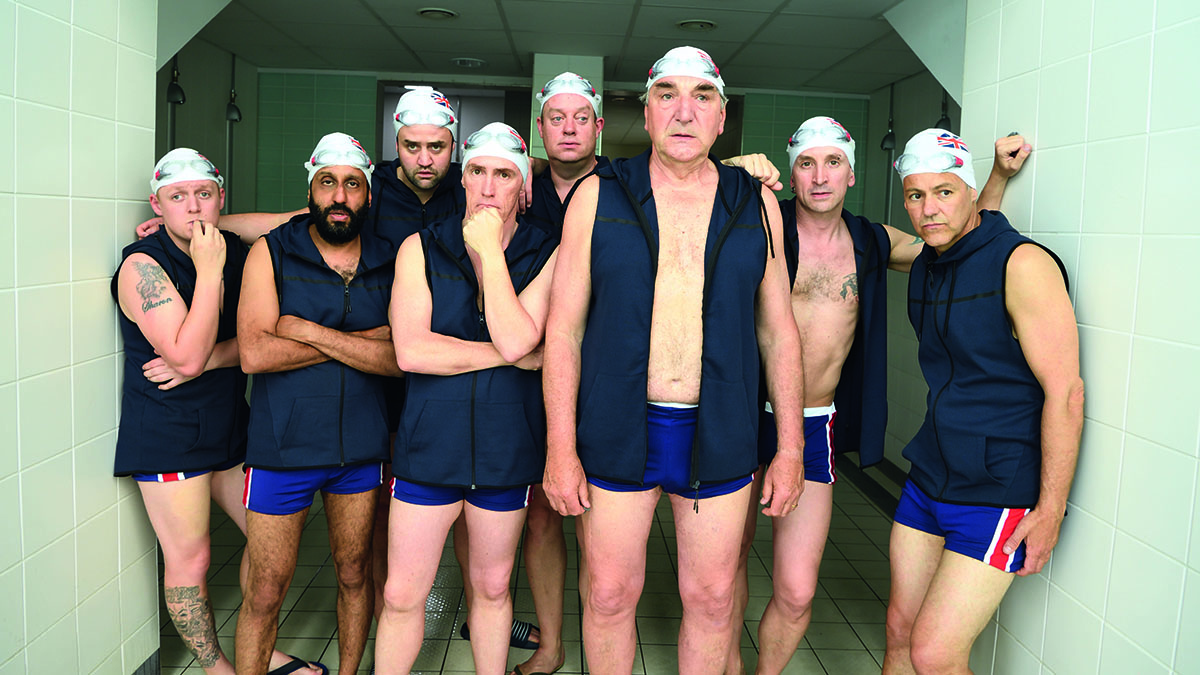 “We had tickets for the London Olympics for synchronised swimming and seeing it live was amazing. The routines were five minutes so for three minutes of that they would be under water.

“It looks incredibly difficult but our teachers, Katie and Adele [from Aquabatix], were brilliant. They were so patient and so helpful and really understanding. So willing to help when we were struggling and they never stopped smiling.

“We were all of a similar standard. It’s obviously us doing it. A group of lumpy blokes giving it their best shot.”

Jim thinks more men might be encouraged to try synchronised swimming after seeing the film – especially when they realise there is more to it than just performing in the pool.

“For a lot of men, the social side is just as important as the sport side of it,” he said. “If someone is a decent swimmer but thinks doing lengths is a bit boring, it might be worth giving synchronised swimming a go. Find a team, go along and just watch from the side.

“One of the rules [in the film] was we do not talk about our private lives so it was a chance to get away from real life for an hour.  Blokes do that with sport. They’d get home and their wife will ask about your mate’s girlfriend and they say ‘we didn’t talk about that’.

“Ted is on his own, he’s widowed, and this is a place where he can go and be comfortable with other guys. It’s his club. He’s a little bit lonely and gets the time with blokes with no pressure – just the fun of synchronised swimming.

“What other sport would put Ted and Thomas Turgoose’s character together? It’s only sport that brings people like that together.”

While Swimming With Men is based on a real-life story about a group of Swedish synchronised swimmers – who also appear in the film – the cast did joke about taking part in the World Championships for real.

Jim said: “We did get excited at the end of filming as the Swedish team were off to the World Championships and there were only two men’s teams entered.

“It was more just a fantasy discussed in the bar but if we had entered, we could have been guaranteed a bronze just for turning up!”