After successful junior careers in synchronised swimming, Gemma Hollas and Chloe Heaton began their coaching journey with the Institute of Swimming as they look to give back to the sport.

The Halifax Synchronised Swimming Club pair sat down for a Q&A to document their road to coaching.

When did you learn to swim?

Gemma: I didn’t start swimming lessons straight away as I was four years old when I first got into a pool.

My mother had taken my sister, who has special needs, to her swimming lesson at Sowerby Bridge Pool and she had to take me in as well, because I couldn’t be left alone.

While I was there, I learnt the basic strokes of front crawl, but at the time it was more of a doggy paddle.

When I turned five or six, the teacher, Jean Hirst, knew I had become confident just swimming for fun in my sister’s lesson, so she asked me to do swimming lessons myself at the old Elland Swimming Baths.

Jean had taught me from the start, when I did school swimming lessons, and up until I was eight.

From the age of eight to 18, I swam for Halifax Synchronised Swimming Club at Halifax Pool, where I was taught for most of my career by Charlotte Hughes.

Chloe: I started to swim when I was four years old. I then did swimming lessons at Halifax Pool.

When I was eight, I started synchro lessons and moved to the competition squad at the same time as Gemma.

We were both in Sue Barrington’s class at first but then we went up to Charlotte Hughes’ team.

Throughout our synchro journey, we were also coached by Lydia Thompson when Sue and Charlotte were off.

What badges do you have? 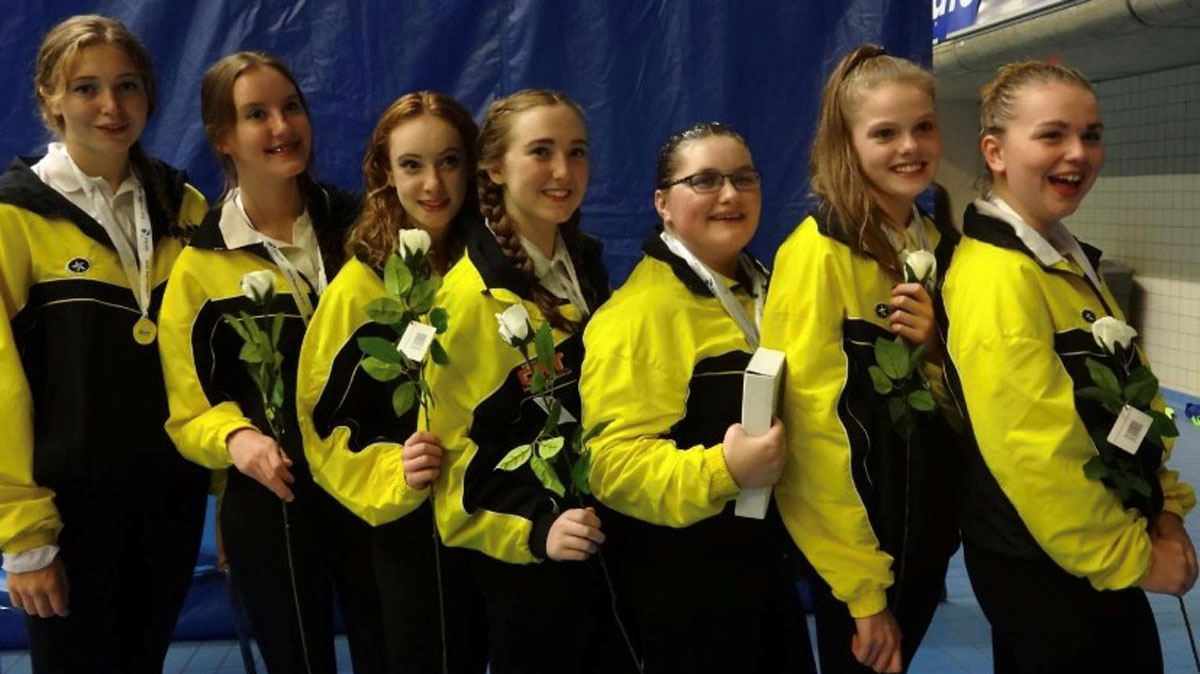 When we moved to synchronised swimming, we won medals from local competitions for our club within solo, duet and team events.

We then won a few Scottish Nationals medals and finished second and third twice at the British nationals.

In 2015, we won gold and were Swim England National Age Group champions for the 15-17 age group.

How did you get involved in synchro? 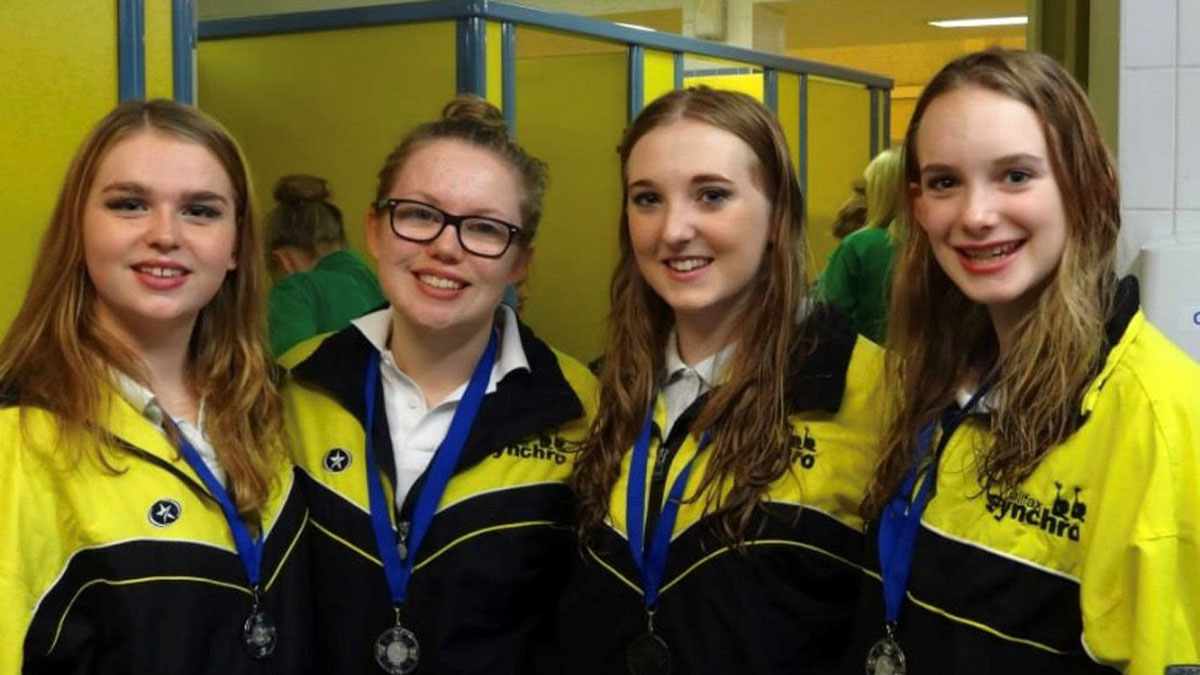 Gemma: I moved to synchro from swimming when I was eight years old.

I was at a fun swim during the summer holidays at Elland Baths where Charlotte Hughes was a lifeguard at the time.

She had noticed me doing splits on the poolside as I was showing my gymnastics side off to everyone.

She then asked my mum if I would like to come along and try out for the summer camp ‘have a go’ sessions.

I was the only person there, which meant I had a one to one session nearly everyday. I loved the idea of doing gymnastics and dance in the water.

After the ‘have a go’ sessions, Charlotte moved me to synchro beginners classes on Thursdays at Halifax Pool and she asked my mum if I wanted to go up to the competition squad.

I was so nervous about it that I cried in front of her, but now as I look back on the past, I’m so grateful to her for asking and giving me the chance to do it.

Chloe: When I was eight, I had been asked by Charlotte Hughes if I wanted to come along to watch the annual Christmas show they held at Halifax Pool.

From there I went into the beginners classes with Charlotte, I had a few lessons and was told I was going to be moving up to the competition squad.

Gemma and I moved up together, so we both became really close friends and still are to this day.

Just like Gemma, if Charlotte hadn’t asked me to come along to see synchro, I wouldn’t be where I am now.

What qualifications do you have?

Gemma: We both have our badges in Level 1 and Level 2 synchro coaching.

We have both coached and led the week long summer camp we hold at our synchro club annually, which helps the young swimmers become stronger with their skills and have fun!

I also do the beginner classes for those willing to join the sport. I bring them up and then pass them onto the teams.

Why did you want to become coaches?

Chloe: We both wanted to carry on coaching after we reached the age of 18 as we felt it wasn’t fair just leaving the club and never coming back.

We wanted to give back to the club and also Charlotte as she taught us for so long.

As we had such a positive synchro career, we both feel as if Charlotte is the main influence on us as coaches.

She had been so encouraging, helpful and kind hearted to us and the rest of our team.

We were influenced by how she taught us to be successful synchro swimmers, so the way she coached us is now the way we coach our swimmers. It’s passed down like a generational system.

Gemma: We both just love the club in general and the work environment is so friendly that it’s just nice to come and have fun.

The club and swimmers are very focused, so we want to get things done right.

We practice four times a week. They’re long days but they’re so manageable.

We both wouldn’t be where we are now if it wasn’t for Charlotte asking us both to come and join.