As part of a series of articles to mark Pride Month, artistic swimmer Stephanie Ramsay shares her experiences as a member of the LGBTQ+ community within aquatics.

Stephanie has been competing for the last five years with Out To Swim, the UK’s largest LGBTQ+ aquatics club and charity.

The club was founded in 1992 and has since gone on to attend competitions across the country and internationally.

Her love for and involvement with the club saw her take on the role as chair of the artistic swimming section shortly before the first UK lockdown in 2020.

Here, Stephanie explains why the community aspect of Out To Swim is so important, why she loves being part of a mixed artistic swimming team and what she thinks will be the role of LGBTQ+ clubs in the future.

Five years with Out To Swim

I joined Out To Swim back in 2016, not realising it was an LGBTQ+ club – I missed a lot of rainbows on the way in!

I came back into the sport after injury and saw it was a fantastic community, so I stayed around and ended up becoming chair just as the pandemic hit, so this is my second year in that role.

It has been very much a white girls’ sport and it can be quite difficult to get into, so it’s about trying to open it up to as many people as possible.

All about the community

It seems like it would be a nice idea at some point to not need to have specifically gay, LGBTQ+ swim clubs or sports clubs in general – and when you look at Nationals, you see that we are a much better part of that wider swimming community now. Perhaps it is less essential.

But it’s about so much more than just an LGBTQ+ swim team, it’s that whole community that comes together, those shared experiences that you don’t necessarily get in a ‘straight’ club.

Artistic swimming is such a small part of the aquatics community anyway. You then have adult beginners who are male, and we account for about 90 per cent of that particular population, all in one club.

That means we definitely have a lot of members who know what it’s like to be on the outside of a community – and when you’ve been there, I guess you just don’t want other people to be in the same situation, so let’s get people to be somewhere where they are comfortable.

I was lucky enough to win a Club Spirit Award at the Out For Sport awards earlier this year. That was really quite special.

Our swimmers are primarily queer of some variety. In our artistic swimmers, we have a much larger straight percentage. That’s because we have people that have come in with really strong backgrounds, who have been competing at national level within their own country.

They have trialled at other clubs and they’ve ultimately come back to us because we had created that community that they wanted to be part of. That was pretty special, to have heard that from a few people now. 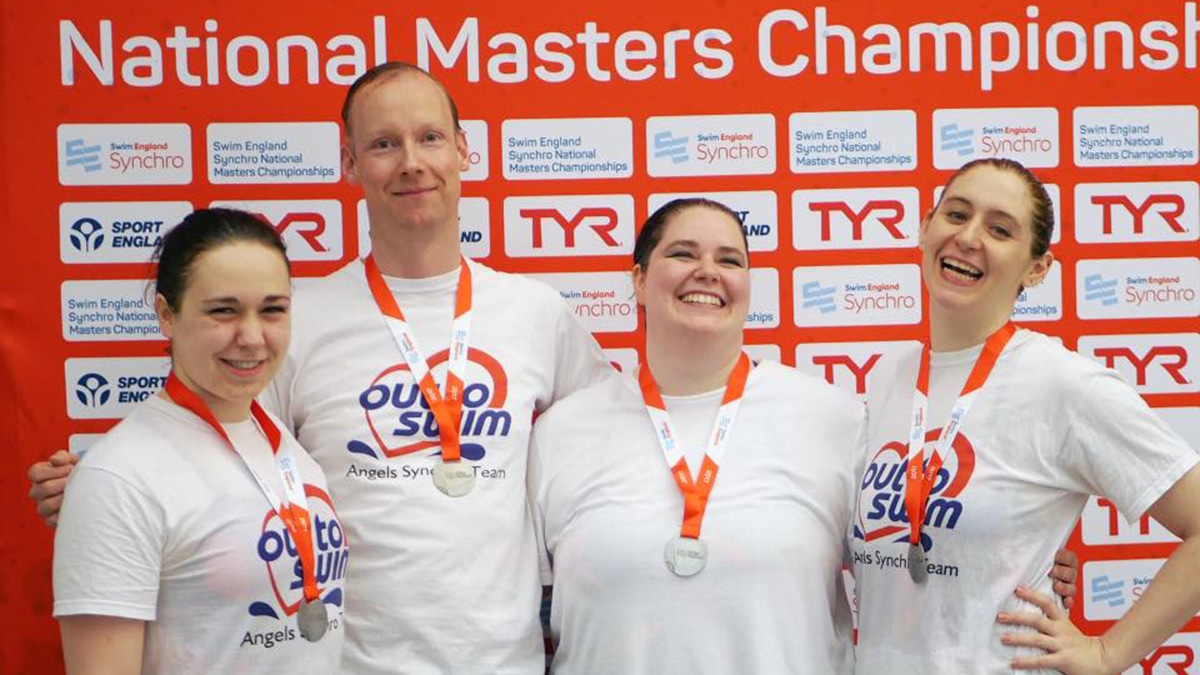 The enthusiasm is ‘amazing’

From my perspective, I have lived quite a blessed gay life in that I’ve very rarely encountered any sort of homophobia. But one of the few times I’ve encountered it has been at an artistic swimming competition when they turned around and said, ‘you’re swimming with them?!’

I have my views, I know which way it felt. So to have seen a little bit of that side of aquatics, to then have people who aren’t necessarily in that minority come in and say, ‘we just want to be part of this, we absolutely want to represent this club, we want to take it as far as we can and be involved and do all this’ – that is amazing.

Again, we’ve got a whole bunch of adult beginners, some are queer, some aren’t. To just be able to give that opportunity and see people really enthusiastic and then recommending it to their friends and then building on that, it’s great to see.

After all, the restrictions of lockdowns over the last 15 months, people are happy to be back as well!

Since the LGBTQ+ support network Pride in Water was first launched last August, I have tried to be involved. I initially turned up to the first meeting because I thought, ‘let’s see what this is about – it’s gay and it’s water, so let’s find out’.

I do think it’s an important thing to be a part of, and it’s important to make sure there’s representation across all of aquatics, to make sure everyone has a fair chance of being seen.

There have been so many stories from different members of Pride in Water about people who came out to them and didn’t feel comfortable at that time.

I think there is always going to be a need for LGBTQ+ sports clubs and that sort of thing, but it shouldn’t be the only place where you feel comfortable to be out as an athlete.

To have that universal acceptance would be a dream.