Rushmoor and Seymour prove masters of the duet at Synchro Nationals

The two most well-represented teams at the Championships made statements through their star pairs, as Rushmoor’s most experienced entrants swam to victory, while Seymour dominated the younger age groups.

World champions Andrea Holland and Carolyn Macdonald had the 60-69 age group to themselves, but they still produced two well disciplined swims to collect the gold with an impressive total of 120.5138 points.

The Rushmoor pair scored 60.4471 points for their technical routine, before adding 60.0667 with their free routine.

Holland said: “I’ve known Carolyn for a long, long time. We were in the British team together in the 1970s.

“We’re very lucky that we have a lot of masters synchro swimmers living around the Rushmoor area, because we can all help each other.

“We’ve got a good coach and we have fun at the same time. But we are still competitive.”

Their team-mates Angela Boitsidis and Carla Sanders added gold in the 40-49 age group, finishing with the second highest total of the competition.

Rushmoor again topped the medal table following their success in 2018.

They won a total of 10 medals, including seven gold, two silvers and one bronze . 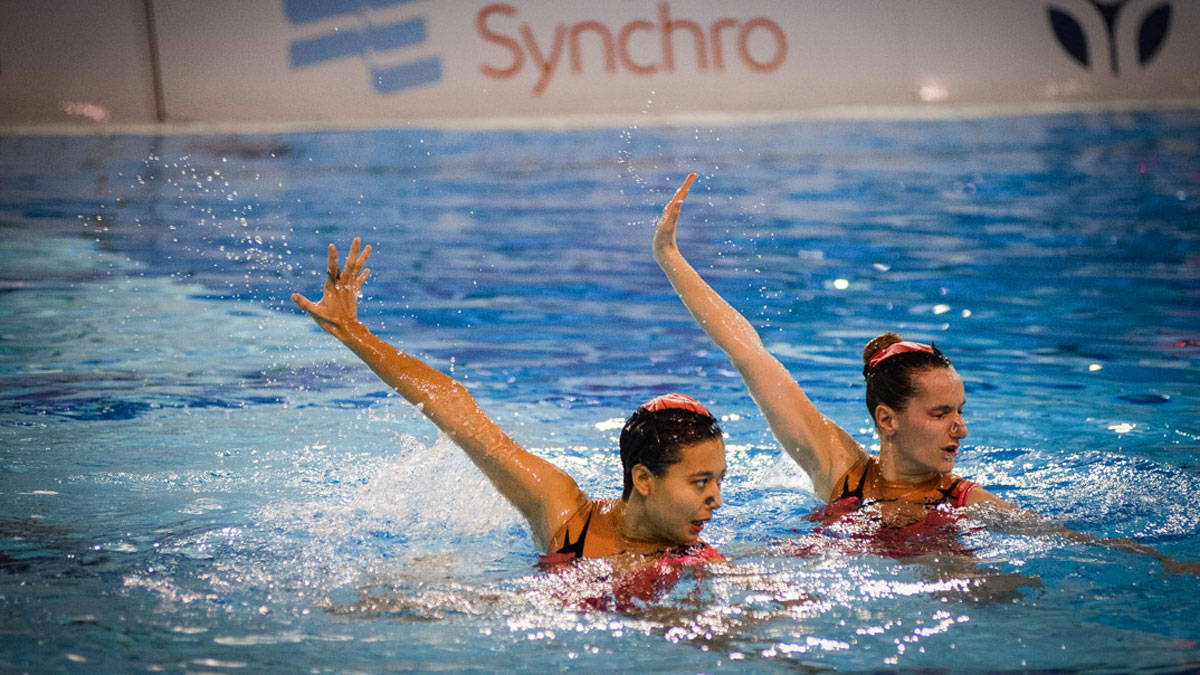 The highest duet score of the day was produced by Seymour pair Benedetta Rovigatti and Laura Loi.

The duet admit they weren’t able to spend much time on the performances, with their team and work commitments taking priority.

Benedetta said: “We spent a lot of time on the phone, because most of the time in training we were focused on the team.

“I just decided what music I wanted and Laura decided the other one.”

On Seymour’s seven medals for the day, Laura added: “We’re really happy about our performances and we’re looking forward to going to the European Masters next year.

They were backed up by Elizabeth Winter and Nur Hafizah Ahmad, who won the 30-39 title.

The Seymour duet were one of just four teams to score more than 60 points with their free routine, scoring a total of 118.8529 points.

Meanwhile, Aqualina held off Rushmoor to win gold in the 18-24 age group.

Aqualina had a three point advantage after the technical duet, but Rushmoor’s pair of Emma Goudge and Lauren Nash scored 58.5667 points with their free routine to lift them into contention.

The Aqualina duet of Kerri Brennan and Lucy Hogg were up to the challenge, adding 57.8333 points for a total of 115.1137, just shy of three points clear of Rushmoor.

Brighton Dolphin completed a one-two in the 50-59 age group, as Elizabeth Fitzsimons and Laura Rogers pipped their team-mates Anne Long and Linda Doidge by just over two points.