Who better to provide tips for aspiring – and existing – swimming coaches than National Lead Coach in Loughborough Mel Marshall, who was named British Swimming Coach of the Year for Swimming in 2017.

She spoke to the Swimming Times magazine about her coaching career and her tips and advice for swimming coaches in Great Britain.

My coaching style for 13-17 year olds is to try and dilute the challenges posed by our sport – boredom, hard work, it’s tiring and mundane at times – by producing a session that swimmers are invigorated by…and making technique at the forefront of their focus.

Work hard but play hard. Create an entertaining environment so it’s not just about how much you are giving them but also about how much they want to absorb.

Try and create a better journey for these young athletes. Beyond 17, you can work on what you need to do from a performance point of view.

Does the size of a pool matter? Only if you make it matter.

Of course at the performance end, you need the bells and whistles but as a coach, I had some of my best sessions in a four lane pool with 60 kids because it made me creative.

In my opinion, up to 18, you need to be entertained, technically sound, working hard and making progress

Going from elite swimmer to coach

It doesn’t seem long since I was making the transition from top swimmer into coaching.

Why did I do it? I always wanted to be a PE teacher and I fully submerge myself into something and I want to be the best at it.

So I did a lot of coaching when I was at school. I would be coaching football to upper 6th boys when I was year 11; imagine how hard that is for a female. I also coached netball and hockey lessons over my lunch time.

City of Derby took a risk with me just after my degree. I earned my stripes coaching the youngsters and it was hard and I met my fair share of doubters.

I went from signing autographs as an elite athlete to meeting people wondering what I knew about swimming. But I was driven, I didn’t win everything. I didn’t win the big one and I was desperate to prove I could do it. 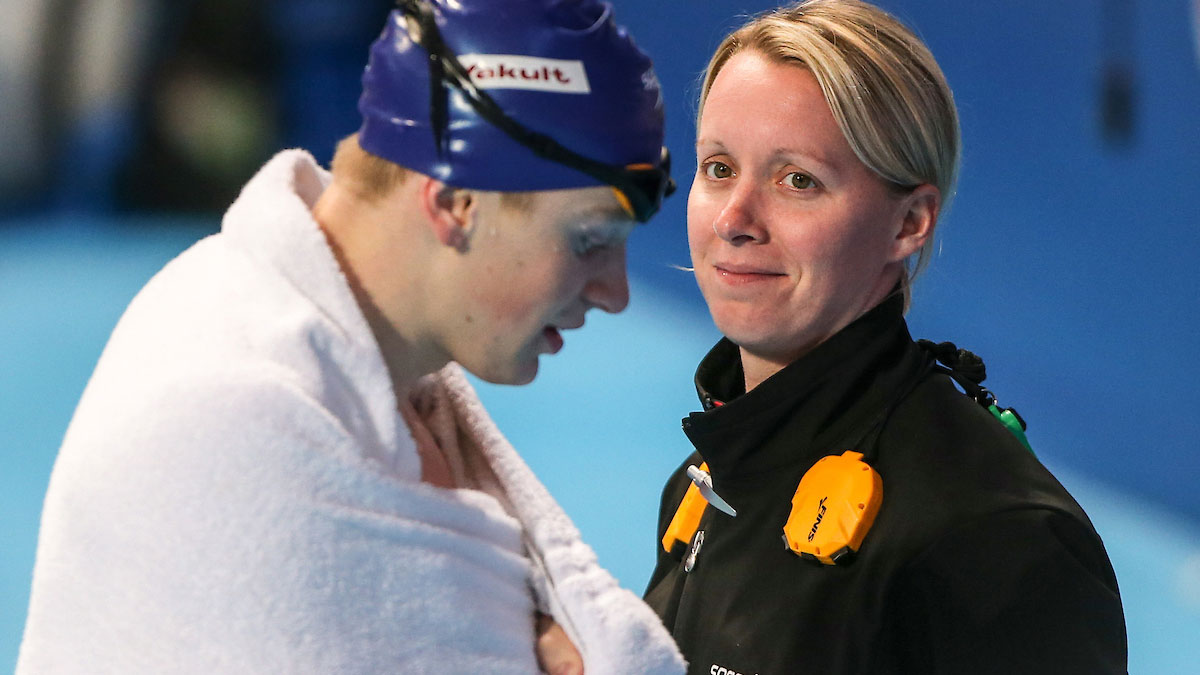 I never met any animosity as a female but I met animosity as I’d been an athlete and so had to double-prove myself that I knew quite a lot.

Yes, initially I had gaps in my knowledge but I had huge areas that some people would never have an insight into and I worked to fill those gaps. That fight was good for me and I got that frontline experience and it started to work.

There isn’t just one way of coaching

My advice would be that there isn’t really one way of coaching but as long as you believe in it and develop your own style and your coaching toolbox is full of every dynamic you need…it can work.

I have picked up good bits from every coach I’ve been with. You have to have those different approaches to deal with different people.

Personally, it’s the thought of making progress that gets me out of bed in the morning and I love the people I work with.

I love performance sport and I love helping athletes when they’re not sure if they are quite good enough. I can be their belief partner. And facilitating what the body can do – that’s what fascinates me.

Make the best of what you’ve got

I would say to any coach: make the best of what you’ve got. It’s up to you as a coach to find the right formula to make the swimmers flourish.

The coaching profession is challenging. You absorb a lot of people’s emotions.

You need to find ways to try and dilute problems; it’s important to know what you are not good at as well as what you are good at.

Subscribe to our fortnightly newsletter and view the best aquatics vacancies, delivered straight to your inbox.

Salary Checker for teachers and coaches