In our latest parent blog, Katie talks about taking her daughter Mabel to her first swimming lesson.

This (above) is Mabel. She has just turned three, and on the Saturday 2 September 2017 she set out on a new adventure – her very first swimming lesson.

We left the house late, as usual when taking any trip out. This made me even more panicky and stressed that our lateness now meant less time to change, reassure and calm Mabel before placing her in a loud and bustling pool with a lot of unfamiliar faces.

We got to the pool, quickly and eagerly changed, along with her sister Olive (7) and got them straight on to poolside. Once inside, Olive happily darted off to her new teacher and got straight in and swimming.

One child down, one to go!

Now for Mabel’s turn. It was 50/50. After being so over-enthusiastic and excited about the first swimming lesson, was she going to bail at the last minute? Would I be left with a child looking like a cling-on monkey with a grip no one could undo, or was she going to going be a mother’s dream and simply get on with it?

Thankfully I got my wish and breathed a really big sigh of relief!

An unexpected start to the lesson

The smile remained on her face, and the teacher asked if Mabel would sit on poolside with her feet in the water. Mabel chose to ignore the request but instead jumped high as she could and in to the pool!

Luckily the teacher had been prepared and caught her in her arms. She was in!

At this point I smiled and got away from poolside and into my seat to watch the session. No way was I making eye contact with Mabel now, she might start doubting her first choice and try and climb out.

Watching proudly from our seats 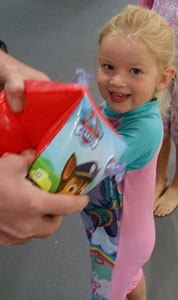 Tom (Olive and Mabel’s dad) and I took our seats and watched proudly as Mabel was bobbing along in her arm bands, along with six other children all taking their first step into swimming lessons, plus one teacher and two assistants.

A few children were sobbing in the arms of the teacher but soon settled down as the fun commenced.

Pool toys and floats were brought out, along with a play watering can which was used to sprinkle the children and allow them to get used to the water on their hair and face (if they were ready for it).

They were encouraged to blow bubbles, put their faces into the water, splash about and generally just have a good time in the pool.

The teachers remained chatty and cheery to really get the children upbeat about being in the pool. At the end of the lesson they were allowed to jump in and we already knew Mabel would be ready to do the biggest jump she could.

Each child was placed on poolside and allowed to decide if they wanted to jump or the teacher would help them to avoid a big splash and wet faces.

I am not sure Mabel wanted to stop as she clambered on to poolside three times to jump in!

A familiar experience for us

As Mabel is our second child, this is a familiar experience for us. This time round we are probably calmer and more reassured that everything will be okay because we can see how Olive progressed through her swimming lessons and how much she loves the water now.

Olive is currently working towards her Swim England Stage 4 Award and really enjoys her lessons.

As Mabel is young we know there could be some ups and downs depending on so many factors including whether she is hungry, tired, or just not feeling like a swim this week.

Three-year-olds are a bag of emotions at times, which can change in as little as five seconds from ecstatically happy to crying their eyes out!

But we will take it week by week, knowing she will gradually settle in to her lessons.

We walked away happy, hungry and tired. Mabel sang nursery rhymes on the way home. When I asked her why she was singing, her response was “because we did it at swimming”.

I am hoping the second lesson is just as successful as the first.