The team headed into the last two events at the London Aquatics Centre with a comfortable lead in the overall standings, having competed in four events across the first two sessions, winning a gold, silver and bronze medal.

They added another gold to that tally in the evening, winning the Division Two, 13-18 Years competition.

There was one final statement from the Royals in the swansong at the Olympic pool.

The Division One, 12 and Under team swam 21st, but they certainly made the wait worthwhile for those in the stands.

They were the only team to break the 50-point barrier, shooting to the top of the podium with 50.7667 points.

That was more than enough to ensure Reading lifted the Combo Cup, as they finished with a total of 51 points.

Rugby were second in the overall standings, with 32 points, while Rushmoor won bronze with 29 points.

It caps off a stellar season for Reading, who dominated at the Swim England Synchronised Swimming National Championships to win the Redwood Trophy for the first time in two decades.

Head coach Kelly-Anne Russell said: “We weren’t expecting anything. We were coming here hoping, but we didn’t expect to win it all, so we’re really pleased.

“We’ve got the whole club here. This year, that’s what we were really trying to do – have the whole club in competition together, all age groups, so they could mix.

“The Redwood Trophy was our biggest aim and our next aim was to try and get the Combo Cup as well.

“We just want to stay where we are and keep improving, trying to be the best we can be all the time.” 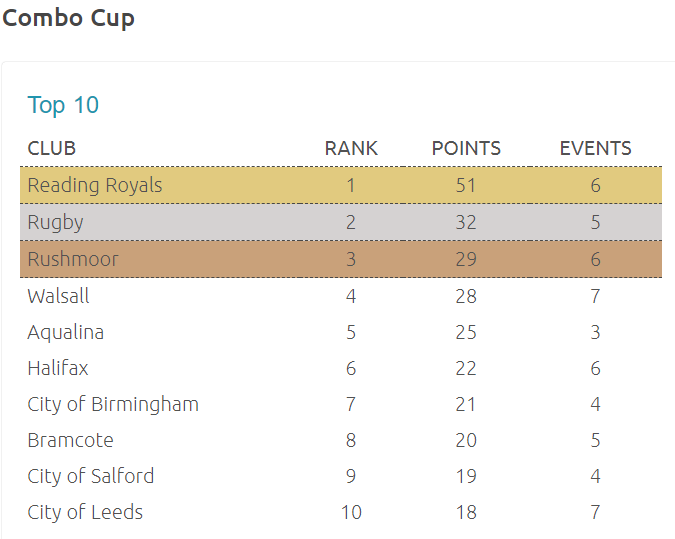 Meanwhile, Halifax picked up their second medal of the day in the Division Two, 13-18 Years competition, wining silver with 60.5000 points.

The club had earlier won gold in the Division One, 15 and Under competition.

Aqualina added a bronze to their medal haul, finishing third with 60.1000 points.

The Division One, 12 and Under podium was rounded out by Sevenoaks and Rushmoor.