Rugby SC claimed the Swim England Artistic Swimming Combo Cup 2021 crown in a win which shows the ‘depth and breadth’ at the club.

After finishing as runners-up at the 2019 event, the club went one better this year as the competition returned to the artistic swimming calendar, albeit virtually.

A total of 28 points was enough to seal the victory ahead of the other 18 clubs who were battling it out to be crowned champions.

Rugby won a total of four medals, two gold and two bronze, which were split evenly across the two divisions.

Their first medal came in the 12 and under age group of division one, as they opened their account with a bronze.

The club doubled up in gold medals in the 13-15 age groups, winning both the division one and division two top spots.

The fourth and final medal was clinched in the division two 15-18 age group.

Really pleased for all of them

Rugby head coach, Hannah Secher, said: “I’m really proud. It’s been really hard for them to have something to work towards.

“In the last two years, we’ve had so little competition and so they didn’t really know how they would measure up.

“To medal across the two divisions and across the age groups is great for our club. It shows that there’s depth and breadth within our programme and recognition across all of those teams, so that’s really good.

“We went into it with not really any expectations. We didn’t know who was entering and what other clubs were able to submit or enter.

“So we went into it having our own goals within our own performances. The results were an added bonus for us.

“I’m really pleased for all of them to just be recognised for all the work they’ve been doing in really difficult circumstances.” 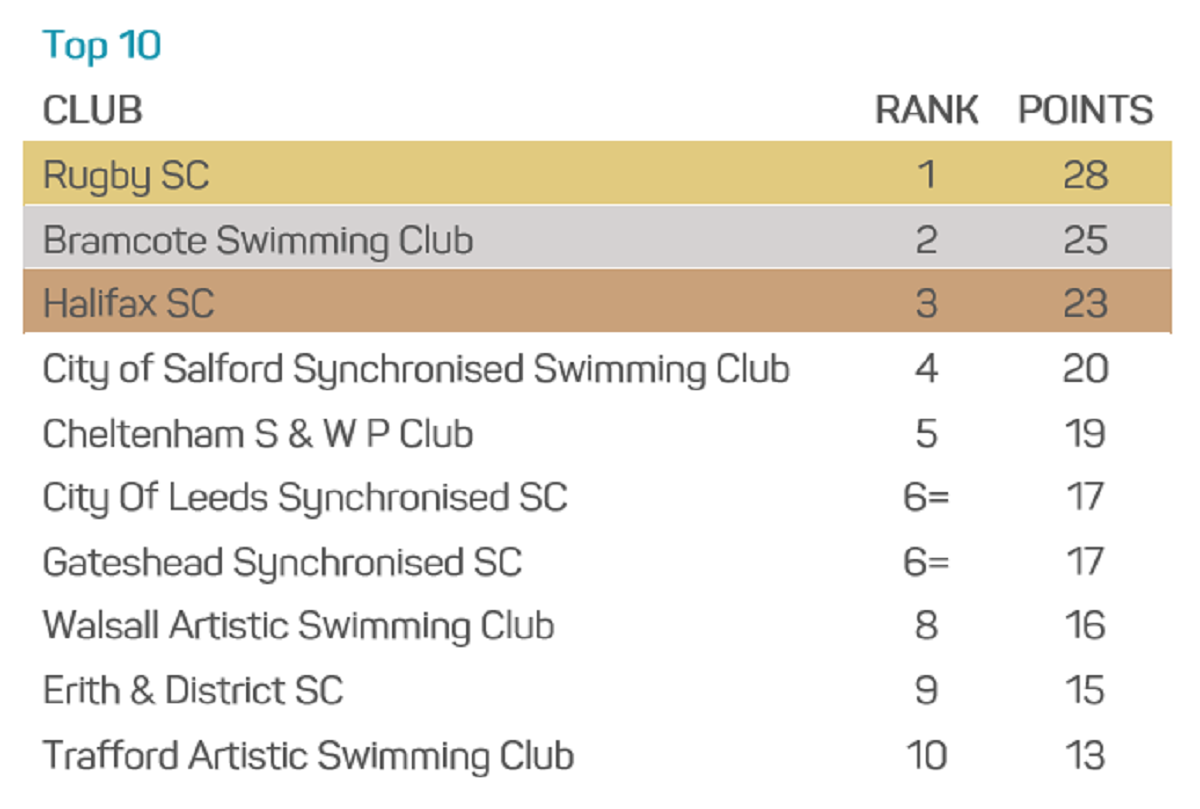 In second place, finishing with a total of 25 points, was Bramcote SC. Following closely in third was Halifax SC with 23 points.

Although the event was run virtually this year, with clubs completing their routines within the comforts of their own pools and submitting the videos for the judges to score, Secher explained that it was good for the athletes to have something to work towards.

She added: “We tried to make it as competition-like as possible, but without having that to work towards I feel like we would’ve lost much more of our membership than we did.

“We did lose some, that’s to be expected, but without having that focus to work towards, even if it was virtual which the swimmers didn’t complain about at all, was absolutely vital to keep them in the sport.

“As a club we’ve actually entered all the virtual events and we have been fortunate enough to medal at most of them.

“I’m really proud of the fact that as a club we’ve managed to achieve that – that was our primary goal.

“To come away as the Combo Cup winner is testament to the whole club, and even those squads that didn’t compete in the Combo Cup. It was a nice way for our club as a whole to be recognised.”