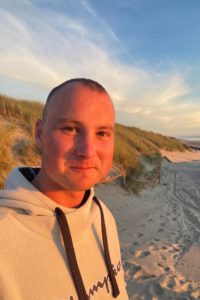 Miles, who is 20 years old, is on his way to qualifying as a Swimming Teacher. The qualification comes after a devastating rare cancer diagnosis forced him to rethink his future.

Here, Miles tells us his inspirational story, how brain cancer changed his life and how he is rebuilding his future, with positivity and hope.

Miles, from Surrey, was just 16 when he became ill. He says:

“I just didn’t feel right. I was constantly tired, I was being sick at odd times, I had blinding headaches and when I passed out I knew it was really serious. I was admitted into A&E where I had an MRI brain scan, which unfortunately revealed a tumour the size of satsuma in my brain.”

Miles was immediately taken by ambulance to St George’s Hospital in London for an operation to remove the tumour; the surgery took eight hours. Miles explains:

“Although the surgery to remove the tumour was successful, I had a subsequent brain haemorrhage (bleed on the brain) and underwent a second operation to drain the blood.

“I don’t remember much after that; I was briefly conscious, albeit I was very sleepy, and was in a coma for five weeks. On waking up I was told the tumour they had removed was grade 4 cancer and I would have to be transferred to another hospital, The Royal Marsden, where I would undergo further treatment to stop the cancer from returning.

“After having been in a coma I literally had to learn everything again: I couldn’t walk, talk, eat, drink, write. I really wasn’t well and I had woken up a different person. I had lost more than 20kg in weight and felt helpless. I was able to communicate by squeezing hands, giving thumbs up and blinking my eyes. I also pointed at the alphabet to spell out what I wanted to say.

“I was an inpatient for more than 10 weeks recovering from the brain surgery and undergoing cancer treatment. During the next 12 months I had 36 rounds of chemotherapy and radiotherapy at The Royal Marsden Hospital and worked endlessly with occupational therapists and physiotherapists to regain my physical strength and cognitive abilities. I slowly progressed from being in a wheelchair to using a zimmer frame to actually walking unaided.

“However, I had to learn to live with the ‘new me’; a young man with a brain injury. All my teenage hopes and dreams felt like they had gone. I had been a clever boy, predicted top marks in my GCSE’s. However, I was unable to sit my GCSEs as I was too sick. The following year I resat my exams and passed nine GCSE’s. I then went to sixth form college and passed three A-Levels. I was offered a place at university to study cyber security and intelligence. However, I wasn’t the same person. I lacked confidence and struggled at coming to terms with my new identity and so university was not right for me.

“It’s a lot for anyone to accept they have permanently changed, and it’s even harder being so young. I’d always wanted to serve in the Special Forces, but I knew this was never going to happen and I had to change tact.”

Miles had always been a very physically capable child. He was a very competent club rugby player and swimmer. He used to compete for both his local swimming club and his school swimming club in galas. When he was nine years old he was the fourth fastest 50-metre IAPS butterfly swimmer in the country in his age category.

“I’d always been physically active and loved swimming. After my diagnosis I knew all contact sports were out of bounds, but swimming would be ok and beneficial to my recovery. The first time I got in the water I still wasn’t walking very well. I lowered myself in, fearful that I would just sink, but my legs and the rest of my body seemed to remember what to do and I could swim. It was amazing to be back in the water. I was still going through chemotherapy at the time and finding I could still swim was one of my happiest surprises at the time.”

Miles is now into his fourth year of remission, and for the past year has been working in hospitality at Saint George’s Hill Lawn Tennis Club. He says:

“I enjoy working here, but can’t wait to start teaching swimming lessons in their pool once I have completed my Level 2 Teaching Qualification. I’ve been assisting in some lessons already and am excited to take on the next challenge.

“I’ve found the training to be very comprehensive and enjoyable. My tutor is really helpful and, at times, where necessary, happily providing me with extra support, especially in some of the written assignments. The other people on the course are lovely too and it is great to feel part of a team.”

Miles completed his Level 1 qualification in March 2022 and is on his way to gaining his Level 2. He says:

“One of the best things about the Institute of Swimming’s qualification is that it is universally recognised and respected. I can use this qualification to work in any pool – anywhere in the world. I’m also loving spending time with the young people in the classes.

Surgery and cancer treatment has had a lasting impact on my brain and I sometimes struggle with over sensory overload when too much is happening around me. So I feel I can understand children’s worries and anxieties about learning to swim better than others. They need to be taught in a calm, clear and structured way. It’s important the children I teach to swim are confident and feel safe in my classes, as building confidence is so important in learning. I’m proud to be able to share my love of the water with others and to teach children a vital life skill. On qualifying, I plan to combine my waiter job with teaching swimming in the afternoons and evenings. I’m happy to have found a job I love – it’s been an all-round positive experience and invaluable to my continued recovery and self-determination.

“I never know what the future holds for me, but for now I’m feeling content, capable, and ready to embark on a new career.”

Inspired by Miles’s story? Want to start your journey to become a swimming teacher …