Coach Kate Gillwood speaks on 'finding her space' in swimming

In her own words, being immersed in water is ‘the best feeling in the world’ for avid open water swimmer and coach Kate Gillwood who has spent her life in aquatics.

“I don’t know how young I was when I learned to swim but I was quite young. I’ve always swum and I absolutely love it,” she said.

Kate spoke warmly about memories of her mum taking herself and her siblings swimming outdoors, which fostered a love for open water from a very young age. “It wasn’t considered open water swimming when I was a kid,” she added.

Fast-forward to more recent years, she is now an experienced open water swimming coach, a qualified ASA assistant swimming teacher and powerboat handler, with much of her life centred around the water.

Kate also spoke candidly about how the tragic death of a close friend by drowning had a significant impact on her life, saying: “That was a turning point for me. I decided to become a lifeguard and really did decided to get back into swimming properly at that point.”

Problems of society ‘mirrored in sport’

Kate spoke of her experiences of homophobia within both sport and life in general, explaining how she believes that ‘the problems that the LGBTQ+ community face in society generally are mirrored in sport’.

“I think the reality is, whatever sport you do, no matter how good it looks it’s a bit of a veneer,” she said. “So when you scratch the surface, the problems that the LGBT community face in society generally are mirrored in sport.

“You add to that the fact that most sports are physical and you tend to be in close physical contact with other people and with swimming, practically naked. So you put all of that into the mix and there are some problems and as I say, it mirrors the problems in society generally.”

After arranging a recent open water swimming session with local members of the LGBTQ+ community, she explains how the experiences of one individual highlight an overarching problem being faced by transgender and non-binary people.

“There was a young non-binary person with us on the beach talking about it and they said that they’d gone to the beach for a swim, they had a binder on and there were people – not swimmers – but people on the beach taking photographs of them,” said Kate.

“On two levels that’s really awful: one is they were taking photographs of a minor and the other is obvious. So I suppose all swimmers are exposed, not just to the people they’re swimming with or competing against but also people outside of that.”

When asked about the importance of LGBT sports clubs, Kate said: “I think safe spaces are really quite important, but there is absolutely a need for education. But who does it fall to do that education?”

Drawing on examples from her past, Kate explains that her time spent working in bars and clubs in Soho cemented her standpoint on a particular question that she is asked.

She said: “People used to say to me ‘well why do you need bars and clubs like this?’ and my answer would always be ‘because you’re asking that question’.

“The need to ask that question highlights the fact that we need these clubs so that’s my standpoint. I’ve carried that feeling for many years, my answer to that question hasn’t changed in thirty years so clearly the need still exists.” 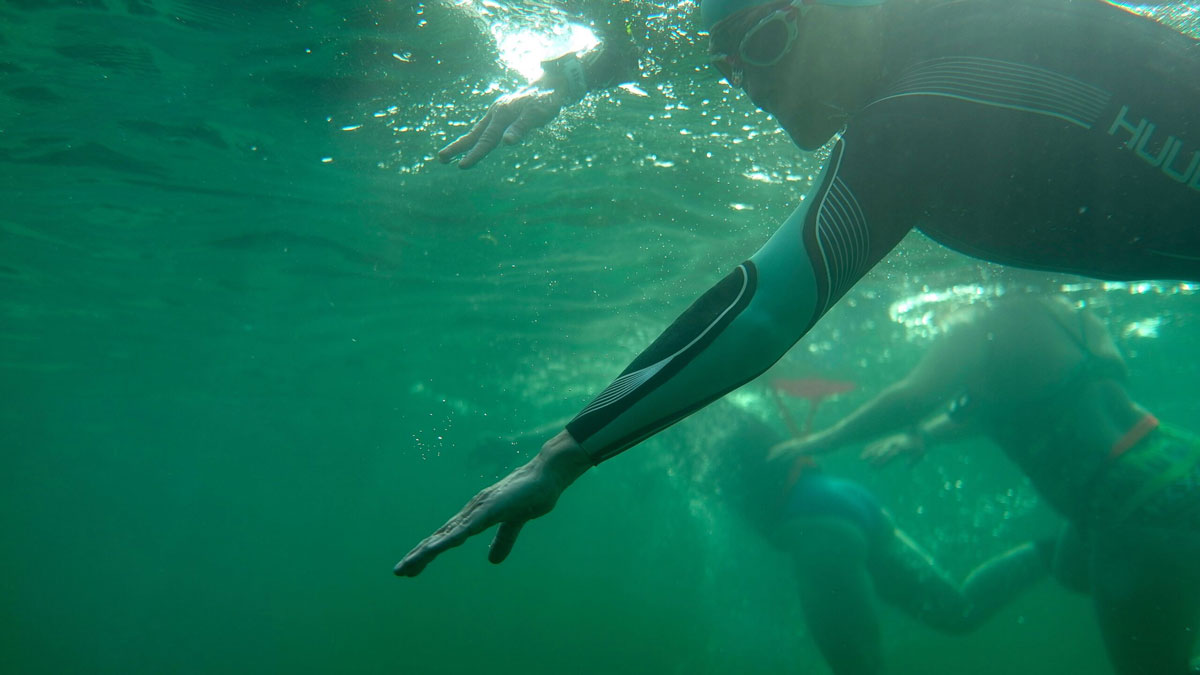 Kate explained that her personal experiences of homophobia within swimming specifically have been limited, and so she describes aquatics as ‘her space’.

However, after swimming with Out to Swim in the 90s, Kate maintains that ‘there was a need for a group like that then. They’ve been going for a long time and clearly, there is still a need’.

She said: “I’ve found my space. I purposefully put the progress flag on my website and I’m working towards focusing some events and sessions specifically for the LGBTQ+ community to offer that space for them.

“I don’t hide who I am from anyone, so I’m likely to attract people in my community. I am absolutely wedded to the fact that I want to do specific LGBTQ+ events, and I make it known of my website – even if it’s only via the flag at the bottom – that it’s clear that it’s a safe space.

“It’s an important part of what I do but it doesn’t totally define me. It’s important to include allies in the journey because otherwise, things aren’t going to change.”

Kate regularly writes blogs for publications such as Outdoor Swimmer and is currently working on a number of exciting projects.

She has a collaboration with a London-based business on the horizon: one that aims to support small LGBTQ+ women-run businesses like herself.

Additionally, she has aspirations to do ‘LGBTQ+ camping weekends in the Highland Mountains and guided swims’ and this month is joining Leap Festival Fortnight, a Scotland-based LGBTQ+ sports festival.

A native of Galashiels who was raised in Yorkshire, Kate now resides in Scotland after living in London for thirty years. You can find out more about her work and open water swimming coaching on her website, Swim Freedom.