The inside story of Sadie Davies‘ historic swim to Lundy

Sadie Davies became the first woman to complete the gruelling swim from Hartland to Lundy – an English island in the Bristol Channel.

As she prepares for her next swimming challenge, Sadie shares the inside story on her achievement, reveals the reasons behind her incredible fundraising efforts, and offers some tips to her fellow open water swimmers.

I grew up in North Devon and spent a lot of time on the River Torridge and the beach at Westward Ho!

In recent years, I started noticing how much plastic was washing up on the tide and started picking it up.

This then grew to joining Surfers Against Sewage and their Plastic Free Communities campaign.

I am a community leader for them and so I organise beach cleans and talks locally. This crisis for our oceans is one of the reasons for my swim – I wanted to raise awareness.

We are lucky enough to have Lundy Island off our coast; I look at it every day on our horizon when it isn’t hidden from view by clouds.

We used to visit as kids with my dad (my Mum has no sea legs!). He was a diver and so the love affair began.

When he died in 1995, after suffering with bowel cancer, he asked for his ashes to be scattered on Lundy. It held such wonderful memories for him.

Now when we visit the island, it really is such an important place for us.

Lundy was the first Voluntary Marine Reserve in the UK from 1971 and, since 2010, it has been officially recognised as a Marine Conservation Zone.

Because of this, and the fact there is little human intervention, the wildlife is amazing on land and under the waves. We need more of these reserves so that our oceans can stand a chance. 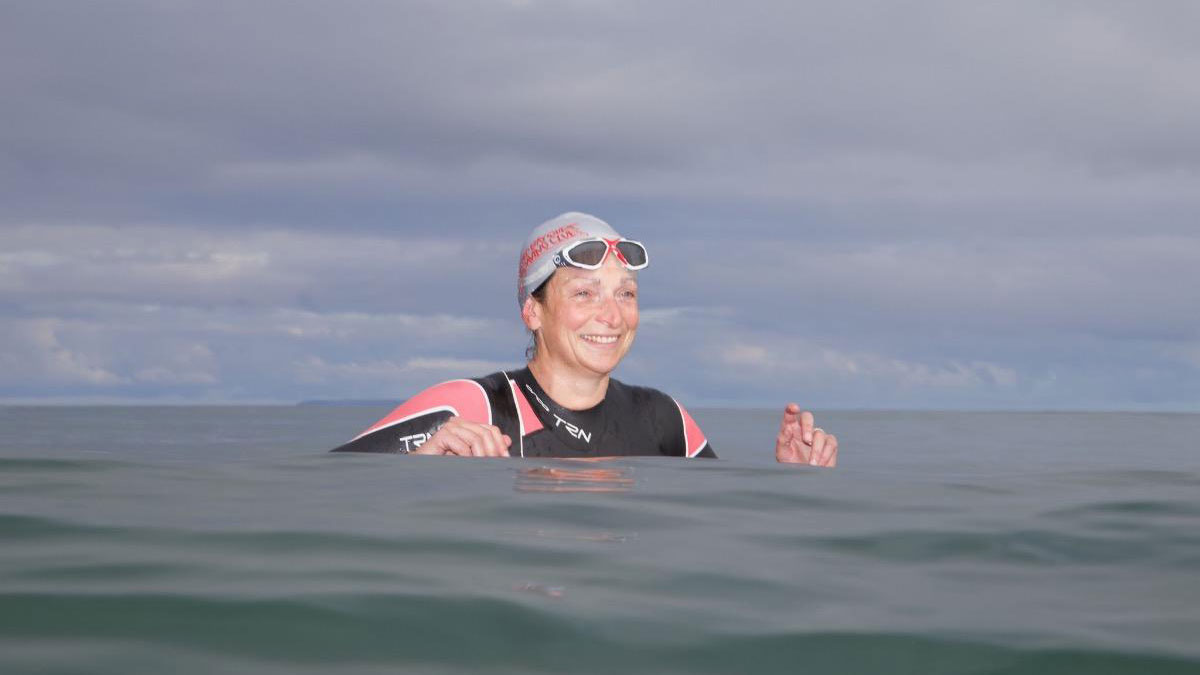 In September 2017, Steve Maclure and Gary Readman swam to Lundy from Hartland Point and this inspired me.

They were the first people since 1952, when champion swimmer Captain Hassan Abdel Rahim and Cyril Webber were the first to try. The captain made it, but Cyril didn’t due to sea sickness.

I kept it to myself for a bit and then announced to my husband over a bottle of wine that I wanted to swim it. When I had said it out loud, that was it. He told me I should do it and the planning started.

I contacted Tim Hudson, who is well known for his knowledge of the sea and tides here.

He had also piloted the boat for Gary and Steve. He was really keen to help me, which was a big relief as that job needed to be done by someone we could trust – the tides in our bay are big!

The next thing was to contact Simon De Burgh from Tri Force Endurance. He had previously helped me to successfully get back to fitness after an operation in 2017.

Simon really knows his stuff and so he set about my training programme for a 15-18 mile sea swim. The furthest I had swum previously was the Dart 10km in 2016. Then the team was set.

I started off with the Exmoor Open Water Swim (4km) and then three or four swims a week from October 2018 onwards, working on technique, endurance and strength.

All my swims were different, usually around 2.7km, sometimes with a pull buoy and paddles, fast sets and then sets which focused on technique.

This meant that no swim was ever the same and so I never got bored of swimming laps! 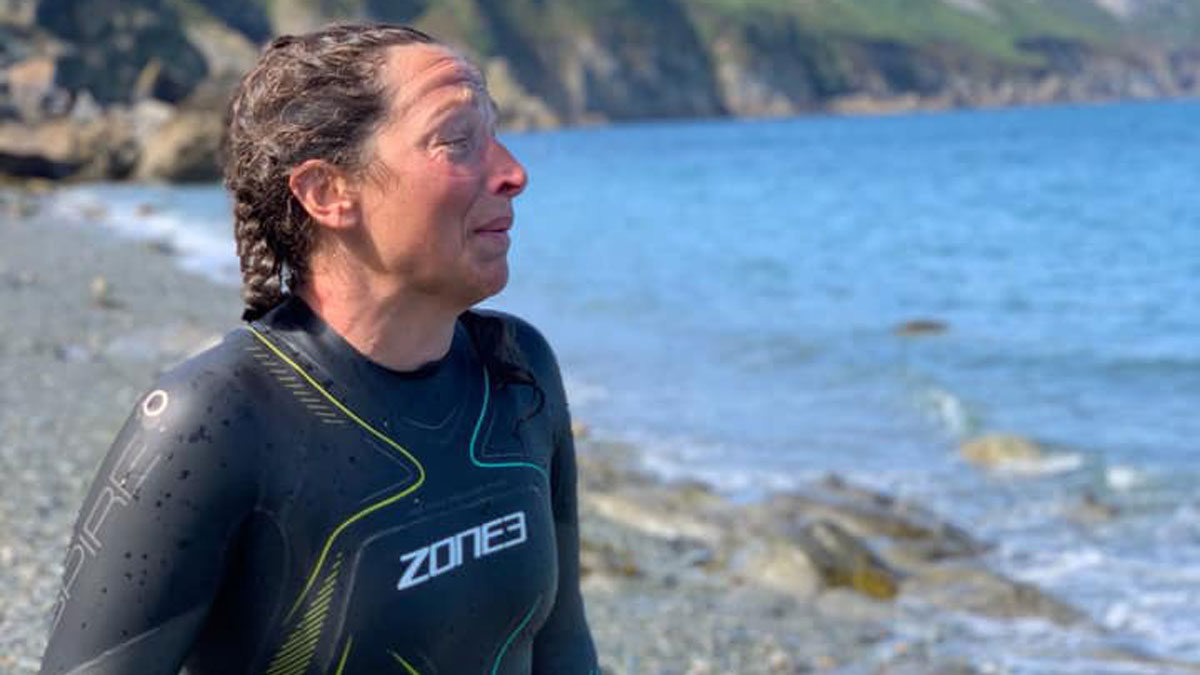 We started to build up the training in February to six swims a week and then in March I had two swims on a Friday.

At this point, I cut out my running and just kept up rowing with my local club Bideford Amateur Rowing Club (Reds) as this was working my shoulders and arms in the opposite way from all the swimming and seemed to be keeping me injury free.

So I never did any really long distances, I just kept up the volume.

I started swimming in the sea at the end of June at Westward Ho! beach and, on rougher days, Bude sea pool.

Towards the end of training in July and August, I was swimming on average 25km a week over six swims – as many in the sea as possible – as well as doing a strength training session and a row on the ergo, which was a total of around 12 hours week.

The particular challenges were staying motivated on those days when I was busy with family or work.

Luckily I’m a teacher, so summer was less busy, but I also help my husband to run a gin distillery, so fitting everything in was hard!

It really helped being part of the local Bideford Bay Surf Lifesaving Club. I would swim with them and also Westward Ho! Swim Buddies; both of these groups really helped as swimming with other people was always more fun!

I also had to get over my fear of deep water! Not knowing what is underneath – I saw a few big barrel jellyfish and they always made me jump.

But the thing I always tried to remember was that there is nothing that could eat me!

Also, swimming with others and going that bit deeper, I learnt to love it – there was the freedom of being out there and the jellyfish were actually beginning to be beautiful to watch underwater. It was a nice distraction!

Soaking in the atmosphere 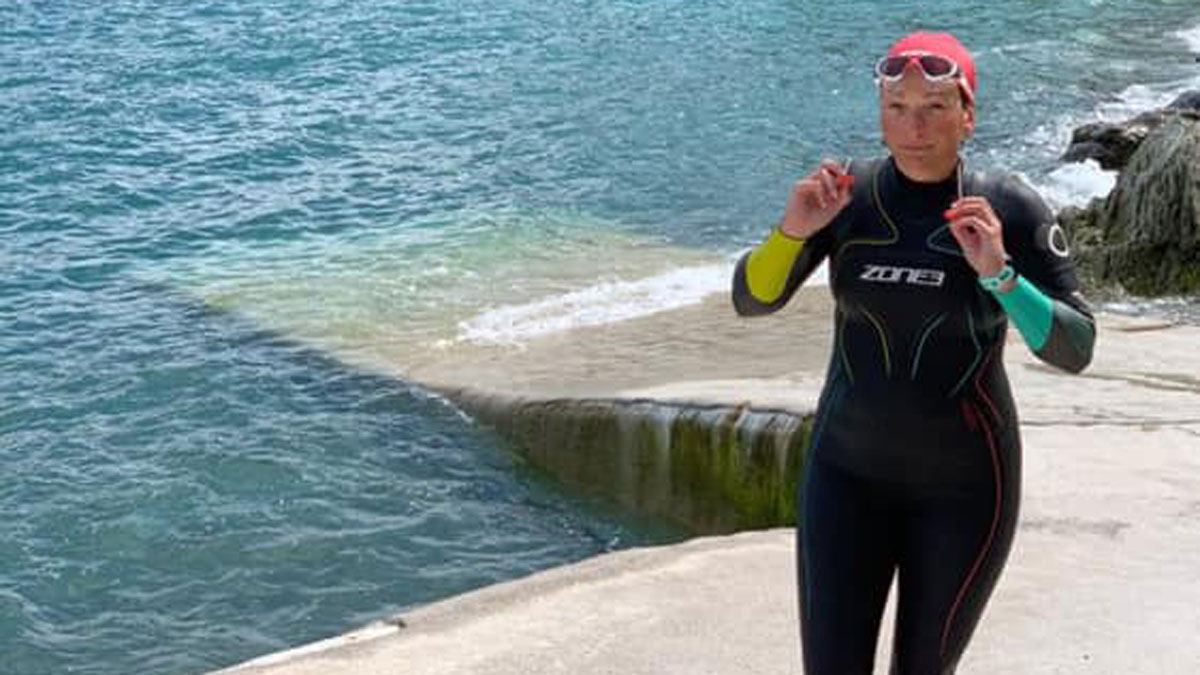 After a few weeks, when my confidence had grown, we spent a few days on Lundy for a holiday and I did a few training swims, my longest being 7km.

I went deep and was joined by seals. They kept their distance and liked to swim behind me.

One seal actually was cheeky enough to swim underneath – that really clarified for me why I was doing this swim, to protect these places and these creatures. It was such a special moment.

On the day of the swim, we set off from Clovelly Harbour on the Rib at 5.30am. It was just Tim and Quinton, my husband, with me.

I slid into the water at Hartland Point, which is quite an intimidating place to be.

These waters are renowned locally for the tidal race around its rocks, which form strong currents.

During the first 10 minutes of the swim, I was just trying to stay calm and focus on swimming, but it was hard.

All sorts of thoughts and worries go through your head. I started to focus on getting my breathing under control and kept looking at the sky.

The moon was on one side and the sun was rising on the other. It was such a beautiful place to be. I had taken on lots of advice from long distance swimmers in the weeks building up to the swim and I’m so glad I did.

The one thing that stuck with me was ‘enjoy it, it is one day. You might not be doing this again, so enjoy the adventure’. An adventure it was. It really was more about keeping positive, resilient and keeping fuelled.

I soon realised I couldn’t keep any food down as the swell was quite big, bigger than we had expected, and I immediately felt nauseous.

This wasn’t helped by the fact that I also started to get vertigo when looking under water, so I had to close my eyes underwater all the way until I got to around two miles from Lundy.

So after packing a huge bag of food, I stuck to a warm CNP drink and gels every 30-45 minutes. 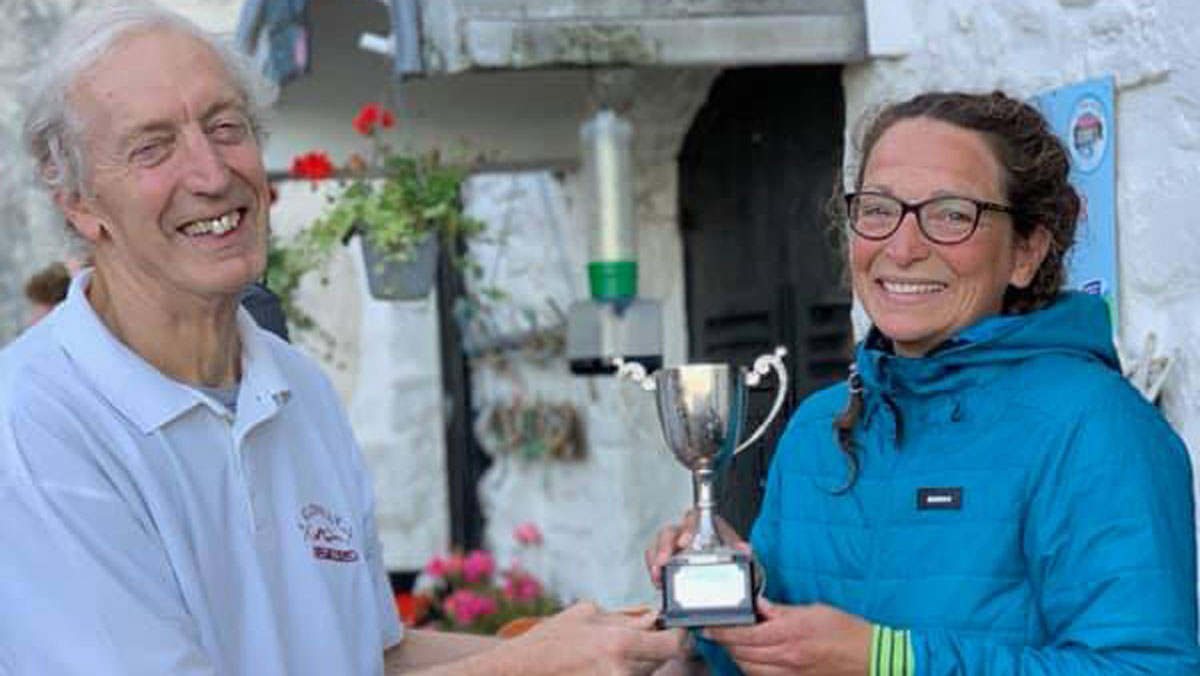 I think the hardest point was just over halfway, when I could see the island, but Quinton and Tim told me they needed me to speed up as the tide was turning. To get to the point I needed to be when it did turn, I needed to get there faster or risk missing the landing bay.

This is when a little mantra popped into my head. Simply ‘You – can – do – this – swim – done’, one word for each stroke and it focused me as I sped up and caught the turning tide.

I managed to swim right into the landing bay, which was brilliant as I started to recognise it as I swam there a few weeks earlier.

That was a real mood lifter! At this point, I realised it is possible to cry underwater. It really felt like I was swimming out to dad and I kept hearing everyone’s positive and encouraging comments from the previous few weeks.

Especially from the ladies at Families In Grief, one of my charities. They had told me about some of the people and families they had been supporting.

I also started thinking about the stories I had read from the Wave Project and their surf therapy courses that had helped so many children, and Surfers Against Sewage and their brilliant work raising awareness for our oceans.

It was such a wonderful 30 minutes swimming up the island to the bay. I was thinking about all these people and I knew I was going to get it done.

When I did finally get to the beach after eight hours and 55 minutes, I laid on the pebbles and had a little sob. It was such an amazing feeling, and one that took quite a while to sink in!

Would I have done anything differently? I would have taped my neck with veterinary tape.

I suffered with neck chafing from my wetsuit and apparently it is the best thing for this. Vaseline was not enough!

My next challenge is to explore the coastline around North Devon and swim from Clovelly to Westward Ho! next summer.

Here are a few tips I can offer to anyone thinking about taking on a similar challenge:

Sadie has raised more than £5,000 for her chosen charities. You can donate her.