The pair have been friends since the age of three and set out to raise £150 for two local charities but were ‘blown away’ by the support they received having now surpassed £2,000.

Originally, the 17-year-olds had planned to take part in a relay swim across the English Channel and had even booked a boat to accompany them.

However, as the country went into lockdown it wasn’t long before they got the call to say that the boat had been cancelled.

They then turned their efforts to swimming the equivalent distance of 21 miles, along the Sussex coastline.

Gracie said: “We’d just been doing short continuous swims that were between three and five kilometres every other day leading up to it, after the Government said we were allowed to start open water swimming.”

Liv added: “Although we compete in different aquatic disciplines, we still train together quite a lot.

“I think completing it together is probably one of the nicest parts of it because we’re used to training together and we motivate each other.”

As all swimming and water polo events were cancelled as a result of Covid-19, the friends decided that they needed a goal to aim for.

But Gracie admits there were some aspects they weren’t expecting.

She said: “The most challenging thing were the jellyfish, which we hadn’t even anticipated.

“It just so happened that the week we were doing our swim, there were a lot more jellyfish in the sea. Liv actually got stung on her hand.”

Liv said: “That was on the second day and we did a total of five days so it meant three more days of being very wary of getting a jellyfish wrapped round your finger.

“It wasn’t as painful as I thought it was going to be though.” 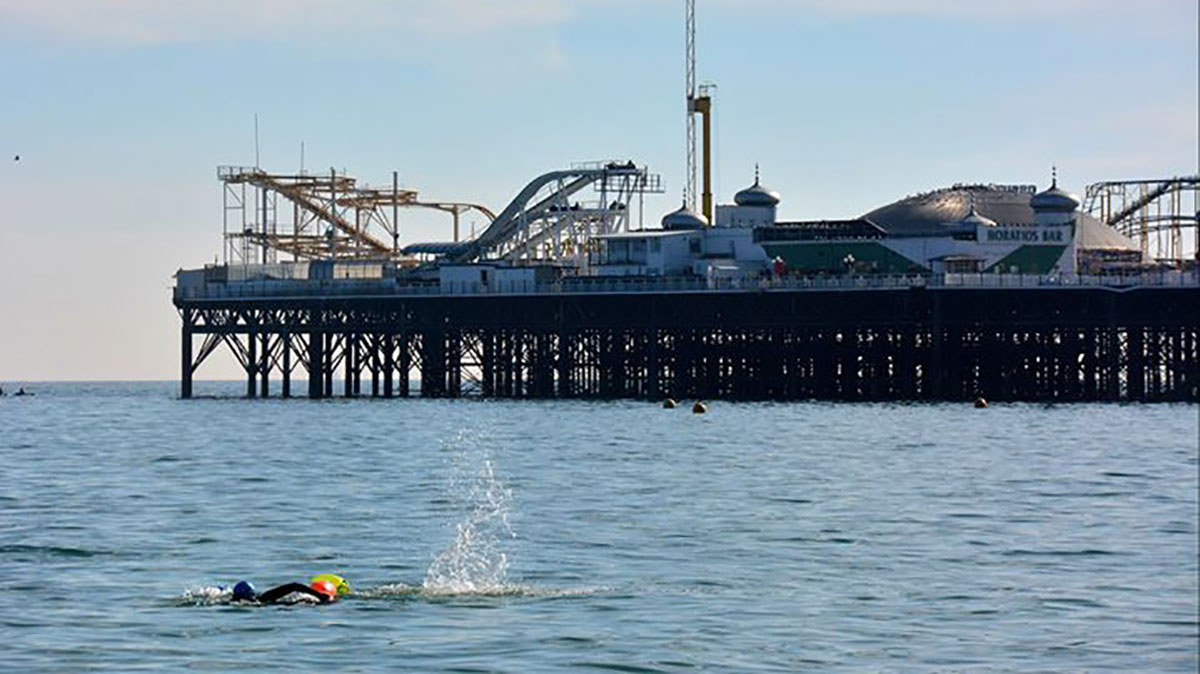 “The swim was physically challenging but, for me, the main challenge was motivation because when we were doing the same five mile straight, starting a two-and-a-half hour swim was quite difficult.

“Knowing we were going to be in the sea, possibly with jellyfish, for quite a long time, it was quite difficult getting that motivation to keep going.

“But physically, because we’re both strong swimmers it wasn’t too challenging.

After battling the current, the jellyfish and the fatigue, Gracie and Liv had covered around 40 kilometres (around 25 miles) in total.

The pair have raised £2,060 so far on their JustGiving page which they will be donating to Brighton food bank and a charity called ‘Off The Fence’ which operates across three main areas – homelessness, women at risk and schools and youth.

Gracie said: “We thought £150 would be a good amount but then we were blown away by how much support we’ve got. It’s something we’re proud of.

“We decided to raise money for Brighton food bank and ‘Off The Fence’ because, due to the coronavirus, the people of Sussex have hit financial hardship, so we thought that it was quite a relevant charity we selected.

“We decided to select local charities because we thought that it’s very important to work as a community during this time.”

Liv explained that they wanted to use the lockdown period to ‘make a difference’.

“It’s really quite nice for both of us to know that we have made a difference and that we’ve used our time effectively as opposed to just sitting inside and not doing anything.

“We know we have made a difference locally.”

When thinking about if they will complete a Channel crossing in the future, the two friends said that they will ‘see how next year plays out’ as it’s definitely something they would like to do.