Ecstatic Hector Pardoe has revealed the Herculean effort involved in achieving his dream of reaching the Tokyo 2020 Olympic Games.

The 20-year-old booked his spot in Japan by winning the FINA Olympic Marathon Swim Qualifier in Setubal, Portugal, in a time of 2:02:07.60 – only five-and-a-half seconds clear of his closest rival.

It was a remarkable performance from Pardoe who only began solely concentrating on open water swimming in the last two years.

He has averaged around 85k every week since then – and his determination has clearly paid off. 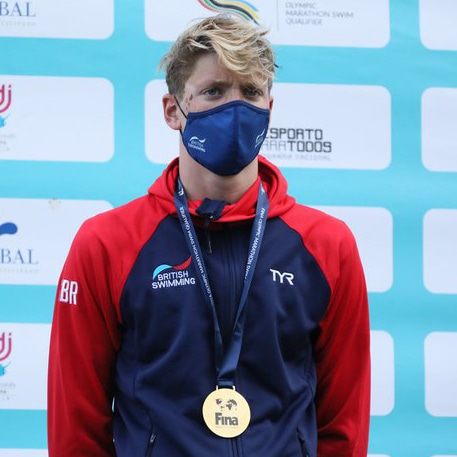 He competes in the Men’s 10k race at Odaiba Marine Park at 6.30am on Thursday 5 August Japan time (10.30pm Wednesday 4 August UK time) – and he is relishing the opportunity to make his Olympic debut.

Pardoe said: “The feeling of qualifying for my first Olympics is even more incredible than I ever envisioned it being.

“After taking such a big risk moving my life to France, not speaking the language, having to fend for myself in a foreign country – which was made even harder by the covid restrictions and not being able to see my family for six months at a time.

“Then of course the intensity of my training, averaging 85k every week for the last two years, it all has resulted in something that I’m so proud of!

“Obviously I’m ecstatic to get the qualification spot but also to get the win on top of that.

“I was thinking before the race that I was a contender for winning but the pressure and my mind were more focused on the qualification spot.

“I felt good in the water. The race was always going to be hard without any of the men who have already pre-qualified to help set the pace.

“This, and the fact it was in a wetsuit, meant I always knew it was going to come down to the sprint.”

Pardoe gave a glimpse into the rigorous training routine which has turned him into an Olympian.

“My average week, at a minimum, is always 85km and above. Whereas when I was in the pool and doing more pool training, I was doing more like 45 or 50km a week.

“So now it’s not far off double the distance. That’s definitely one variant on how it differs.

“Then gym-wise, it’s more about repetitions, about being toned and strong but without gaining mass. Obviously if you’re a 10km swimmer, you don’t want to have huge biceps and things like that!

“There’s not that much of a difference in terms of hours in the water, but the distance is the big difference.”