Jack Laugher and Chris Mears showed that they mean business this year, securing a 3m European gold in the synchronised diving event at the London Aquatics Centre on day five of London 2016.

Earlier in the evening, both Tonia Couch and Georgia Ward made podium positions in the 10m Platform event, taking silver and bronze medals respectively.

Laugher and Mears were over 10 points ahead of the competition in their final score, and looked very strong from the start. The duo led the way from the third round of dives, and left the Russian pair Ilia Zakharov and Evgenii Kuznetsov trying to claw their way back into the top spot.

Russia had won the synchronised 3m European gold for five consecutive European championships in the run up to London 2016, but the Brits were not fazed and two brilliantly executed final dives made sure their challengers didn’t get a look in.

“Having the lead going into the final round was really good for us, but we tried to keep focus and make sure that we delivered.” – Jack Laugher

The two English divers ended the final round with 456.81, and are looking to improve on this ahead of the Rio 2016 Olympic Games.

Mears commented, “Winning (3m European gold) feels great, off the back of this year we’re had some really good performances and we’ve also had some not so good performances, which I think has actually been pretty good for us because they have highlighted what we need to work on.

“I love having the crowd here, having my parents and close family here; my cousins. Everyone was here, which was fantastic, and Jack had his mum here too.”

“I think that makes it all the more special to deliver to a home crowd.” – Chris Mears

Laugher added, “We’ve got the hardest dive list in the world now, and doing our fifth dive really well helped. Our required dives went really well too which is a massive positive for us. But our fifth dive was absolutely on point and that was the highlight of the day really.

“We’re going to be looking at working on those technical errors we highlighted today. They’re only small things but they obviously need to be worked on. So a lot of hard training and a lot of work and hopefully it will all pay off in the summer.” 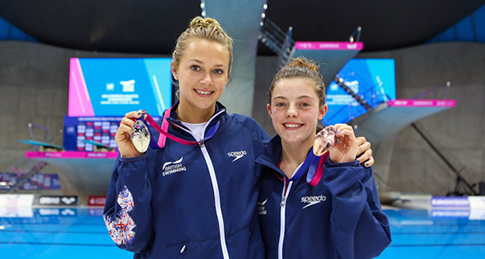 The women’s 10m Platform event was closely contested, and it was a tense battle to the final dive for Tonia Couch, who was the Russian Prokopchuk’s most dangerous competition.

Couch finished strong but couldn’t quite match the Russian to take gold, scoring 532.70 for silver, and winning her first European medal.

She said, ”I’ve never got a European medal before, normally Europeans aren’t on my side, but I just focused on myself and what I needed to do. I started a little bit rough, but I told myself off and came back into the game.”

“The crowd is so good, it’s amazing. Everyone is cheering for everyone, not just for GB, although they are extra loud for us. I really do appreciate it, it is so lovely.” – Tonia Couch

Georgia Ward, who had already claimed a bronze medal with Matty Lee in the Team event on opening night, made it a double to join Couch on the podium after scoring 325.05.

The Londoner commented on how she felt about a second European medal, “It’s crazy, Matty and I came away with a bronze in the team event and that was incredible, and the fact it was in my home pool as well makes it even better.

“The crowd are incredible, they are so supportive, having some of my family here as well and knowing people in the crowd makes all the difference.”