Desharne Bent-Ashmeil and Amy Rollinson added a senior Women’s 3m Synchro gold to their CV – only three months after landing a junior title.

Dive London’s Bent-Ashmeil and Luton’s Amy Rollinson topped the podium in the Girls’ 19 and under event at the British Elite Junior Diving Championships In Memory of David Jenkins at the Plymouth Life Centre last October.

And at the same venue, they repeated their triumph to win the British National Diving Cup gold.

In a strong field, they finished with a score of 291.30 – 5.10 points clear of silver medallists Yasmin Harper and Katherine Torrance.

Bent-Ashmeil said the result had given both of them a huge confidence boost.

“We’re both back for the individual Women’s 3m Springboard tomorrow, so hopefully we can both make the final in that one.

“This result has definitely given us a real boost.”

Rollinson added: “It was nice, because we have gone from being the older athletes to being the younger ones in the competition.

“So it’s just nice to be able to do that and get the five dives in like we did.

“It’s also just great to see everybody from all the different clubs, because we’ve not seen the older people for a while, and at my club, a lot of them are younger – so it’s just nice to be around other athletes at a competition.”

Dive London’s Grace Reid and Scarlett Mew Jensen were the bronze medallists with a total of 281.31. 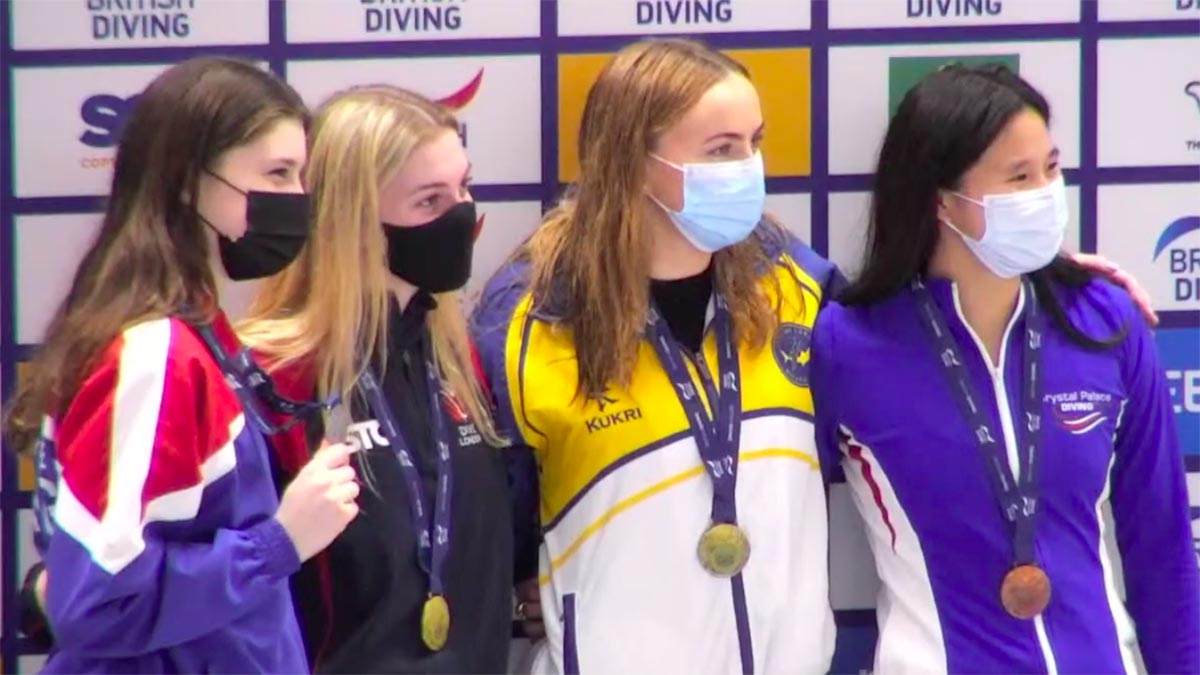 After being awarded top spot in the Women’s 10m Synchro alongside Robyn Birch on the opening day of the event, Dive London Aquatics Club’s Martin put on a consistent performance throughout at the Plymouth Life Centre.

She opened up with an impressive 76.50 for her opening dive – a forward 3½ somersaults in pike.

She finished with a score of 315.90 which ensured second spot ahead of her Crystal Palace Diving Club team-mate Eden Cheng, who took bronze on 309.95.

“I felt like I was consistent all day, in both the prelims and the final, so I was actually crying with good tears afterwards.

“So I’ve been really happy with both synchro and individual.

“Now I’ve got this under my belt, I feel like I’m going to be even more confident going into the rest of the season.

“It’s hard when you haven’t competed much in the past two years, so you might feel a bit shaky, but actually I felt like I’ve got my nerves together and managed to pull it out of the bag, so I’m really happy.”

City of Leeds Diving Club’s Lois Toulson was the highest points scorer in the competition with a total of 358.80 but was competing as a guest in the final after performing one of her dives from the 5m platform, as part of a pre-agreed training plan.

Daniel Goodfellow secured the Men’s 3m Springboard crown with an outstanding final dive to edge out his City of Leeds team-mate Jack Laugher.

Goodfellow scored a huge 95.40 for his back 3½ somersaults in tuck which saw him snatch top spot from Laugher.

The 25-year-old was leading at the halfway stage but a mistake on his fourth dive allowed Laugher to jump to the top of the standings.

However, the Olympic champion couldn’t match Goodfellow’s tremendous final dive and he had to settle for the silver medal.

He said: “There are a lot of positives for me.

“My fourth dive was a bit shaky and I think I did a good job to pull myself back from that.

“I’m really happy with my last dive – I’ve not done that really well in a competition for a long time.

“Generally, I’m quite pleased with my performance, especially with where we are in the season, it’s only February. Overall, I’m really happy, but it’s early on, so there’s loads of work still to be done.

“Some people like to look at the scoreboard as you go along, because it gives you something to aim for, and some people don’t, because it throws them off a bit.

“I’m a bit of both. I knew roughly where I was, and I think at that point, it’s your last dive so you don’t hold back, you go for the big scores!

“Sometimes you get it, sometimes you don’t, but fortunately this time it was a good dive.”