Goodfellow won the second Commonwealth gold of his career and was joined on the podium by his team-mates Jordan Houlden and Jack Laugher.

The 25-year-old said English and British diving is ‘really strong’ which was proved by the one, two three – and admitted his triumph was a mixture of ‘relief and joy’ following a ‘rough year’.

Goodfellow snatched top spot with his final dive of an exhilarating contest which saw the lead change hands a number of times.

Australian Shixin Li was in pole position after the opening two dives but Laugher – bidding to retain the title he won at the Gold Coast 2018 Games – went ahead in the third round.

His costly fourth dive saw Houlden close the gap on him and he took advantage to take the lead in the next round.

Goodfellow, however, wasn’t to be denied and he nailed his last dive to go in front for the first time and land the gold.

He said: “It’s been a rough year for me. So to come away with the gold there’s a little bit of relief there as well as joy.

“I’ve been diving really well the last couple of weeks, better than have all year, so to see something come from the hard work is a little bit emotional.

“It’s like doing a new event really. It is special because I’m doing it by myself. 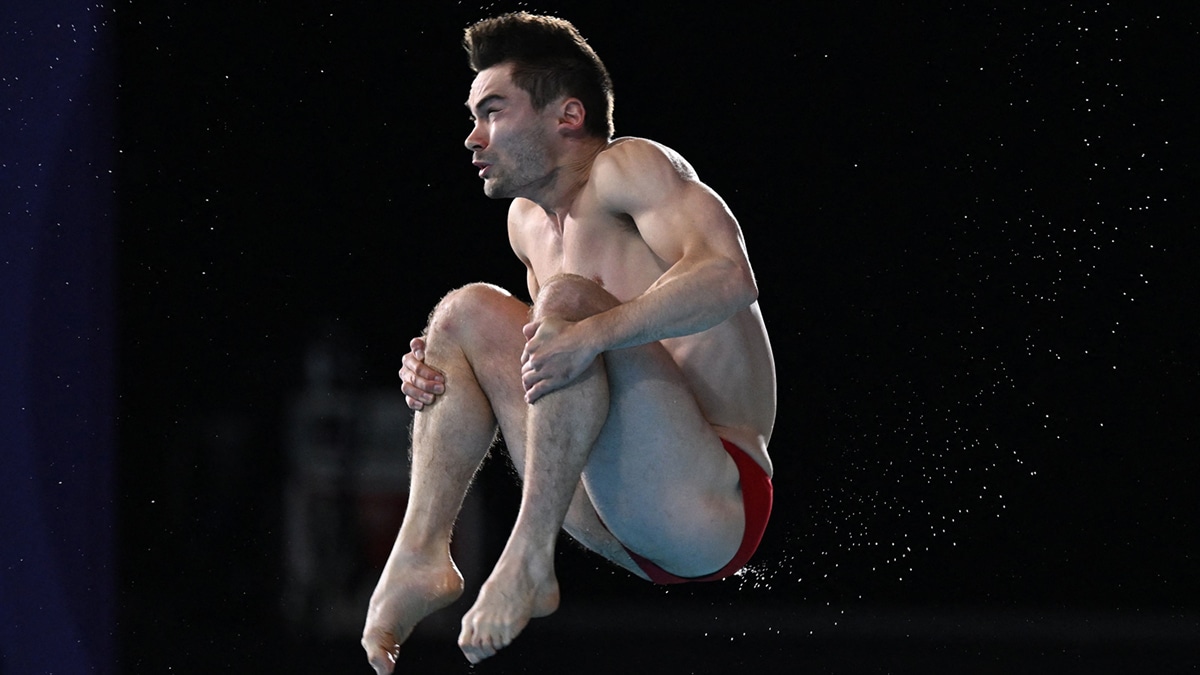 “I’m really happy with how I handled the pressure. It’s a building block in my springboard career because I’ve not really been doing it that long.

“I’m really excited to take a medal back home. I’m really chuffed for myself and the people back home.

“Because I was a synchro diver for so long and done mixed synchro for a long time and I’ve won plenty medals doing that, it does feel extra special when you do it by yourself.

“I think it just proves where I’m at with my diving. I had a few people doubting me as well so to go out and do this makes me happy.

“So to come here and win gold, I wouldn’t trade anything [for it].

“[It’s] amazing I can’t remember the last time there was an England one-two-three in diving at the Commonwealth Games.”

Goodfellow praised the camaraderie among the Team England divers who shared the podium.

He said: “We’re all Yorkshire-based lads.

“I’m from Leeds and Jordan’s from Sheffield. Jack’s from Leeds as well – me and Jack train together and we’ve been synchro partners on the 3m springboard.

“It’s a really good feeling up there and British diving and English diving is really strong.

“When you’ve got athletes like Jack in the competition, amazing. One of the best springboard divers of all time.

“We’re great training partners – all three of us are on the podium so we must be doing something right.”

Houlden was delighted to add a 3m Springboard silver to the 1m Springboard bronze he won on the opening night of the diving.

It’s proving to be an excellent Commonwealth Games debut for the 24-year-old and he said: “[I’m] speechless really – it is beyond belief.

“One, two, three – you just can’t believe it. It’s very special – especially with the team we’ve got out.

“They’ve got a great calibre of dives and they can do them very well. Jack is an Olympic medallist and Dan can really dive as well, so yes, very good.

“I had a little slip on my inward 3½ somersault but overall I couldn’t be happier with my performance.”

Laugher admitted it ‘wasn’t quite his day’ but it was a ‘massive honour’ to be part of the team.

“I’m really happy with the performance,” he said, “and if I were to come third, I would rather come third to two teammates than other people.

“All of us are world-class athletes. When you look at our previous results and stuff like national championships it moves around quite a lot.

“It’s a massive honour to be a part of a team that has so many high-quality athletes.

“It wasn’t quite my day. I dropped my fifth dive a little bit but if I were to do that differently the result would have been better, but that’s diving.

“These other boys in previous national championships have dropped dives and that’s what’s cost them beating me, so diving’s just one of those things.”