Andrea Spendolini-Sirieix put on a thoroughly impressive performance on her Commonwealth Games debut – as five Team England divers secured final places on the first day of the diving competition.

Spendolini-Sirieix topped the leaderboard in the Women’s 10m Platform preliminary round, finishing 28.60 points ahead of her compatriot, Lois Toulson.

Eden Cheng also qualified in eighth place – while Jordan Houlden and Jack Laugher will be in action in the Men’s 1m Springboard final.

Spendolini-Sirieix will be brimming with confidence ahead of her first Commonwealth Games final following five excellent dives in the preliminary round.

The 17-year-old opened up with a score of 69.00 for her forward three-and-a-half somersaults in pike, which left her in second place.

She took the lead after round two after earning 73.60 for an inward three-and-a-half somersaults in tuck and never looked back – pulling further away from the rest of the field.

Her highest-scoring dive came in the third round as she was awarded 81.60 for her arm stand back double somersaults, one-and-a-half twists – and she finished with an overall total of 360.60.

Toulson ended up as Spendolini-Sirieix’s closest challenger as she grew in strength following a slow start to the event.

The 22-year-old was down in 11th place after round two but had climbed up to fifth by round three and then was second heading into the final dive of the contest.

That saw her achieve her best score, 75.20 points for a back two-and-a-half somersaults in tuck and she took second spot with a total of 332.00.

Cheng also saved her best until last to secure a final spot after finding herself in 11th place following four rounds.

With the top 12 of the 14 competitors qualifying, Cheng scored 72.00 for her back two-and-a-half somersaults in tuck to climb up to eighth place overall on 280.80.

Spendolini-Sirieix said ahead of the final: “I’m definitely really excited.

“I’m trying to replicate it and have as much fun and enjoy the atmosphere as much as possible.

“I haven’t had that many people watching me before so it’s a bit different but it makes it even more enjoyable knowing you have all the support of the crowd, your family and all of your team-mates – it’s incredible.

“I have just really, really enjoyed it and I’ve had a lot of fun so far.

“I saw my dad and my mum and brother in the stand and it’s really nice to have them in person and have them physically support me.

“As long as I go through the movements again and I have fun, I’m happy with the outcome.” 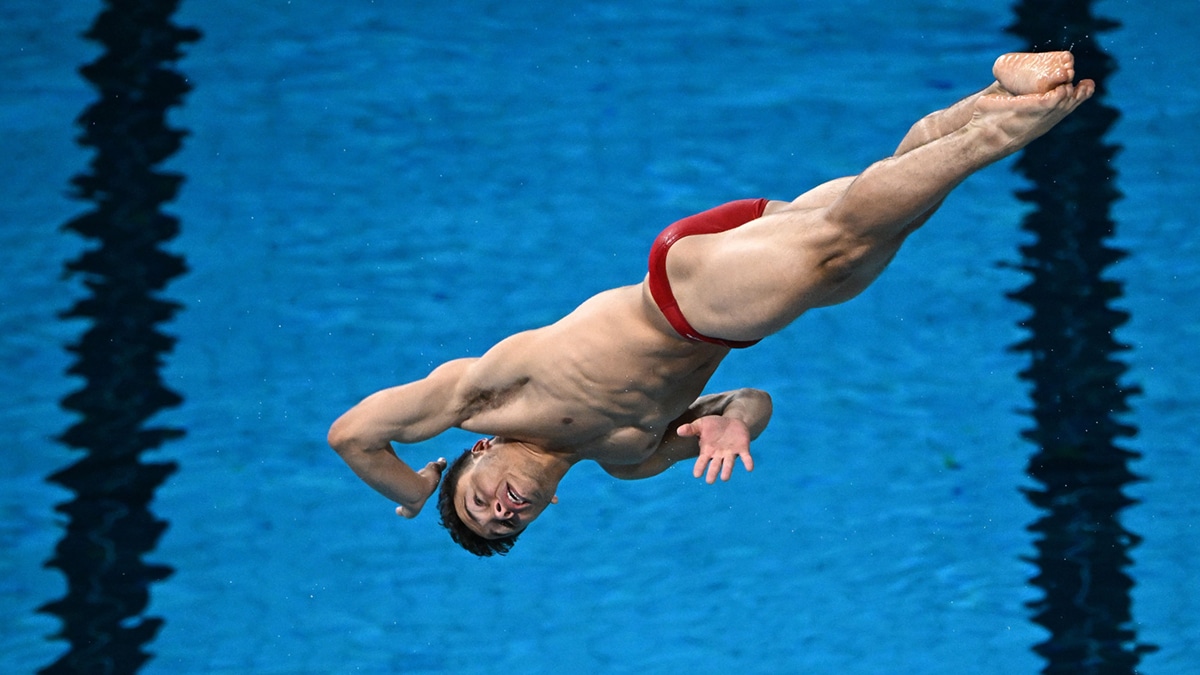 Commonwealth Games debutant Jordan Houlden said he felt ‘overwhelmed’ as he started his Birmingham 2022 campaign in the Men’s 1m Springboard.

Yet the 24-year-old showed no signs of nerves as he finished in third place in the preliminary round with a score of 384.10.

His best score came in round four as he earned 70.40 points for his reverse two-and-a-half somersaults in tuck.

“My first Commonwealth Games, so [it was] a bit overwhelming at the start with a massive crowd and everything.

“It’s quite an achievement really.

“You’ve got Jack Laugher, you know, he said that he didn’t do his best but I think when tonight comes that’s when all the dives and everyone will turn their game up just a little bit.

“I think that’s when everything will start to pick up.”

On being part of Team England, Houlden added: “It definitely pushes you on.

“You’re here so you have to try and do better than them but it’s all like family really.

Laugher, meanwhile, admitted he felt a bit nervous but said he would be doing his best to defend the three titles he won at the Gold Coast four years ago.

He didn’t get off to the best start in the competition and a disappointing third dive saw him in eighth place at the halfway stage.

However, he scored 81.60 points in round four for his inward two-and-a-half somersaults in pike and eventually climbed up to fourth spot overall to finish on 383.90 – 0.20 behind Houlden.

Laugher said: “I was not quite expecting the level of noise that there was in the first dive.

“I was a little bit nervous and scared to make those mistakes but I need to just let go and enjoy myself and bring out my best performance later.

“It’s a bit harder to concentrate than it usually would be. With diving we’re used to smaller crowds and especially not a home crowd as well.

“It’s a little bit more difficult but I think I handled it okay.

“I’ve got quite a lot of competitions to enjoy myself and learn from this experience.

“Coming off the back of 2018 I won every event I did, so there is that bit of pressure.

“I try not to think about it but it is there. I’m not going to try and hide from it.

“I just want to try my best and defend those titles if I can.”