Three-time Commonwealth champion Jack Laugher said he hoped he had done his late grandmother proud after handling the pressure to claim gold in the Men’s 1m Springboard.

He was joined on the podium by his England team-mate Jordan Houlden, who bagged bronze at his debut Games.

Laugher’s grandmother – his ‘biggest supporter’ – recently died and he missed her funeral due to the World Championships in Budapest.

He said: “My grandma unfortunately passed away a couple of months ago.

“She was fairly local but I was unable to attend her funeral due to the World Championships, which was very sad.

“But I’m an athlete at the very top and the risk of Covid was just too high.

“Hopefully I have done her proud today – she was my biggest supporter.”

Laugher sealed his victory with his highest score in the final – 80.85 for a forward three-and-a-half somersaults in pike which left him with an overall total of 447.05.

That was 10.00 points ahead of Australia’s Li Shixin, who took silver, with Houlden finishing on 429.30.

After being asked how he felt on winning gold, Laugher said: “Great, obviously.

“[It was] a great performance, very steady – a few mistakes here and there but I’m really happy, and to do it in front of a home crowd makes it that little bit sweeter.

“I think I got it wrong this morning: I was trying to indulge in the crowd a little bit too much. I’m quite introverted in the way that I compete and the way I am usually.

“So, this afternoon I tried not to get too involved with the crowd… until that sixth dive went in. I knew it was good and then I could get excited with the crowd and enjoy it.

“With Jordan, his first two dives were amazing but they are high-degree-of-difficulty dives and when executed well, which he did, obviously that puts a lot of points on the board.

“I do my list in a different order. I do my easy ones first, then ramp up my difficulty as it goes along.

“I knew that I still had it fairly under control; I knew I could still attain a good score.

“It was about not getting too ahead of myself, and not reminiscing on the misses.

“My third dive was a bit of a miss for me. I missed my hands – I didn’t even grab – so that was difficult to process quickly.

“Today, I was pushed. It was a big-scoring competition – probably the biggest scoring that we’ve ever had at the Commonwealth Games.

“There have been great performances from everybody and I’m pleased to get on the podium with Jordan.” 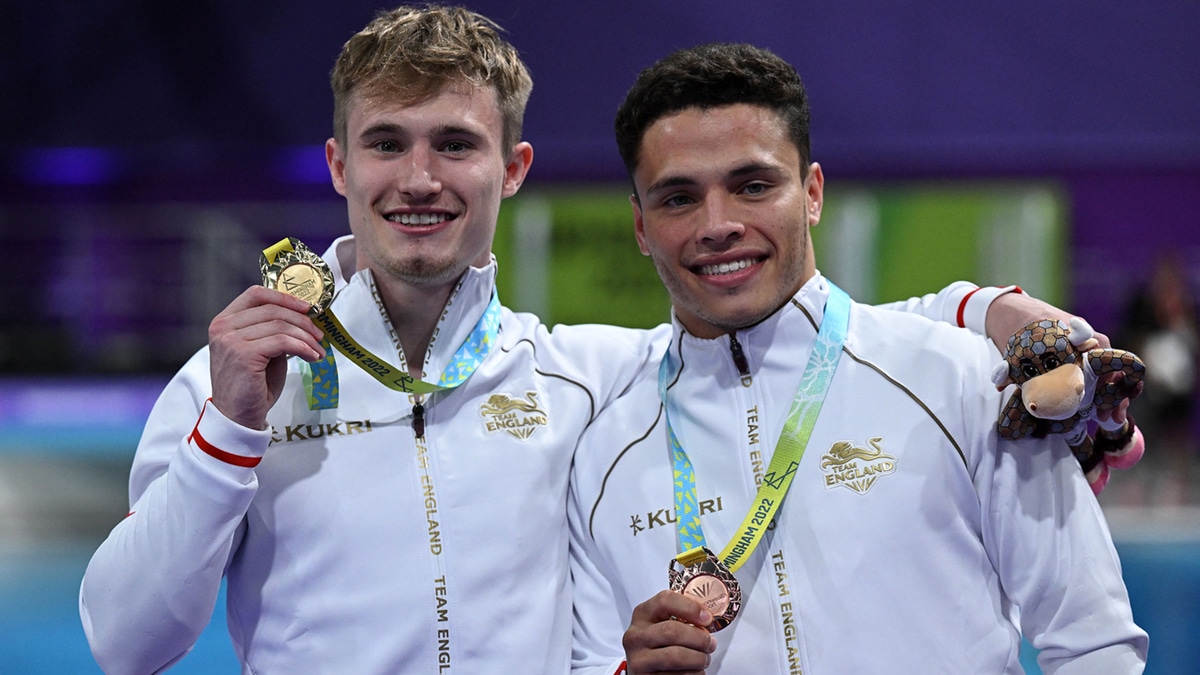 Houlden admitted it was an ‘absolute honour’ to share the podium with Laugher.

He said: “[I’m] speechless really because I wasn’t expecting to get the bronze medal.

“I came out here, it’s a really nice facility and I dove really well.

“It was definitely a bit overwhelming in the prelims but I was able to work on that and grasp how it was going to be this afternoon and did really well.

“I didn’t really have any nerves at the start – I felt really ready for it so I went there thinking ‘what have I got to lose?’.

“I’ve got into the final and that’s really what I came here to do so I went in there just to give it my all, have fun and that’s what I did.”