That left Team England on a total of 15 diving medals from the five-day competition at the Sandwell Aquatics Centre – six gold, four silver and five bronze.

It was the perfect way for England to end the diving contest having dominated it from day one.

Spendolini-Sirieix and Williams went ahead in the second round and never looked back as they finished on 333.06 points – 14.52 ahead of Kothari and Toulson.

It was Spendolini-Sirieix’s second gold medal of the Games and her third in total and when she was told it confirmed a record medal haul for the host nation across all sports, she said: “It does? That’s good.

“I’m vey honoured to have been part of this team. It was extremely strong and we showed everyone how powerful we are and I’m really proud of everyone.

“I came here with no expectations I just wanted to have fun and improve all of my dives I made a conscious decision to train even harder than I was the past couple of months and it definitely worked.

“[Coping with pressure] is something I’m learning as I’m growing as an athlete.

“I try not to focus on the external pressure. As long as I keep the internal pressure under control, and it doesn’t overwhelm me, then I think that’s really important.

“I’m learning, I’m going to make mistakes on the way, and I’m really excited to see what the future holds.

“I’m very, very excited [about Paris]. The preparations are underway and I’m excited to see what I can do.”

Williams was pleased to have added a second gold to the Men’s Synchronised 10m Platform he won alongside Matty Lee – but was still frustrated with his performance in the individual competition when he finished seventh.

He said: “You do not want to come into any Games expecting to get medals.

“But last Commonwealths, I came away with a silver and I was trying to improve that .

“So two golds is very good but I’m still a bit disappointed about yesterday and my performance in the individual.

“There is a lot of world class diving in England – it’s really exciting. You have people like Andrea who is just 17 showing how good they are.

“Obviously at the Commonwealth Games you’re allowed to enter more pairs than normal. In normal competitions, we would only be allowed one synchro pair but here we were allowed two.

“To get a one-two just shows the depth that we have and how many good divers there are.”

Kothari and Toulson saved their best dive to last, scoring 76.80 for their back two-and-a-half somersaults, one-and-a-half twists which guaranteed them a medal – although they faced an anxious wait to see what colour it would be.

The Australian duo of Cassiel Rousseau and Emily Boyd still had to perform their final dive but they couldn’t overhaul the English pairs to spark wild celebrations with all four English divers belly flopping into the pool when the result was confirmed.

Spendolini-Sirieix added: “I had it planned.

“I said if we do well, we can all belly flop so I get Kyle, Lois, me and Noah and said ‘come on guys, let’s go and belly flop’.

“They didn’t really know what was happening but by the end we had fun and it was a perfect way to end the comp.” 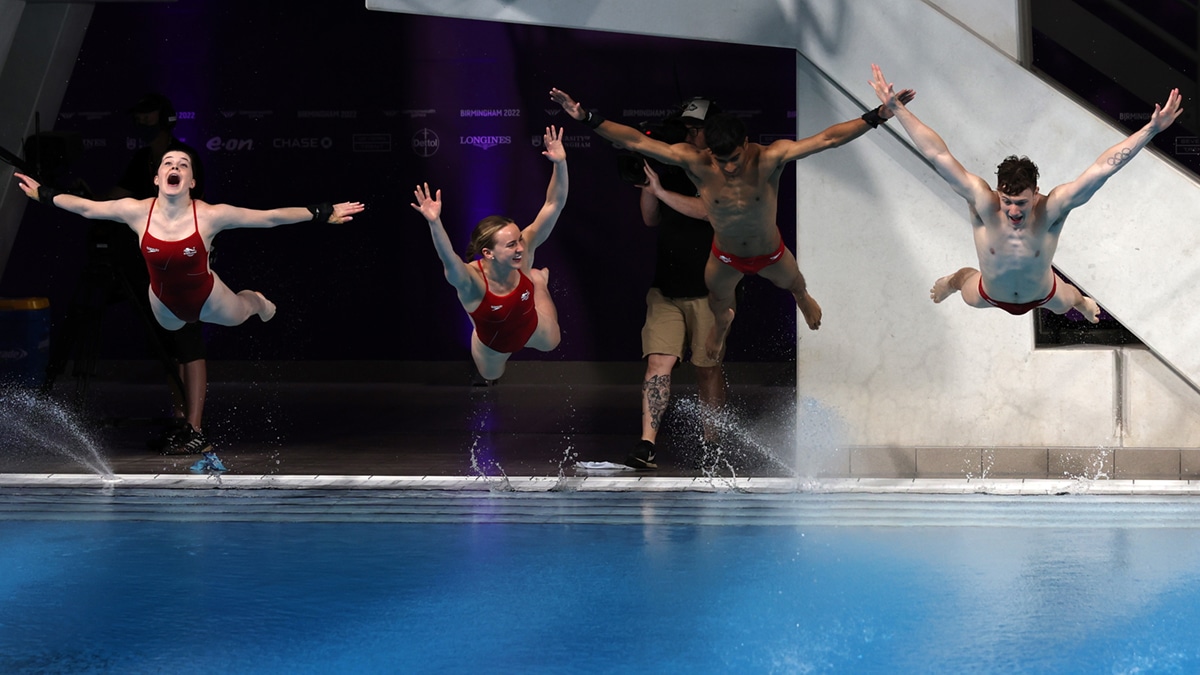 Kothari and Toulson were only put together as a partnership last week and they were both thrilled to be on the podium.

“We’ve only practiced a few times so to come away with silver, we are really happy.

“The whole team has been in great form here and we’ve even got a few fourth places which could have definitely been more medals.

“So to know we have a lot of medals and there could be more is really motivating and the team as a whole is really happy.”

Kothari added: “It was a last-minute job when we both found out we were together.

“I know Lois is such a good diver so I was thinking as long as I can hit some ends, we have a really good chance.

“The strength of this team at the minute is crazy.

“I think people around the world will be looking at the British team and think ‘they are challengers ‘and will be watching out for us.

“It’s really exciting to see. There are a lot of juniors coming through so there is longevity as well.”

So close for Bent-Ashmeil and Cutmore

The day’s other final saw Desharne Bent-Ashmeil and Ben Cutmore plus Yasmin Harper and Jordan Houlden team up in the Mixed Synchronised 3m Springboard.

Bent-Ashmeil and Cutmore had a chance to seal a medal but could only secure 63.00 for their last dive and finished just outside the podium places in fourth with a total of 297.30.

It was the third time in the Games that Bent-Ashmeil had finished fourth but Cutmore said they had done themselves proud after only diving as a duo for the third time together.

He said: “I think we dived spectacularly for only our third time actually doing the synchro training or competing

“We did really well we did ourselves proud. 297 is a great score I’m so proud of both of us.”

City of Sheffield team-mates Harper and Houlden had never dived together with the double Commonwealth Games medallists stepping in to replace the injured Matthew Dixon.

Houlden said: “It was great fun this morning.

“I didn’t know I was going to be competing until last night at about 10pm.

“I had to learn a jump hurdle and pretty much had to relearn some of the dives I haven’t done in a long while. We did pretty well out there with just one hour together – I think we both had fun.

“It’s been fantastic. It’s been fun obviously doing two events which were great and I got in to fill in for Matthew Dixon who hurt his back in the 10m prelim yesterday.

“He really wanted to do this morning and unfortunately he couldn’t.

“I’m sure he would have done a better job than me!”

Harper added: “We train together every day but we have never done a jump together in our lives.