Jack Laugher and Anthony Harding capped a remarkable debut season as a partnership by adding a European title to their impressive medal haul.

After winning World Championships silver and Commonwealth Games gold in the Men’s Synchronised 3m Springboard, they put on a dominant display in Italy to triumph at the European Aquatics Championships.

Their margin of victory was 25.32 after a third score of more than 400 points together.

It was another thoroughly impressive performance from the duo, which included three scores of 80-points plus.

A forward two-and-a-half somersaults, two twists in pike in the third round saw Laugher and Harding earn the highest score of the contest – 85.68 points – go to the top of the leaderboard.

After slipping into second place following the fourth round, they finished in style to seal gold.

That ensured they finished with an overall total of 412.83 – the only pair in the competition to break the 400-points barrier.

Laugher said: “I am very proud of today.

“Tony really stepped up. It was a first big outdoors competition for Tony and we did well.

“It is the big day for us. It was a really strange season with three big events. 2014 was the same and I didn’t do well then at the Europeans.

“To be honest, for us the peak of the season was in Budapest where I think we were even unfairly beaten.

“I am really satisfied and proud with what we have done here.”

Harding added: “I had to wait so long for this.

“It was tough. Before the event, the clouds came and I was struggling with the conditions. I am not used to these outdoor conditions.

“I am over the moon to be diving along Jack and the fact that we will spend the next three years diving together. We need consistency, in order to learn and prepare for bigger things next year.”

Silver and bronze for Noah and Ben 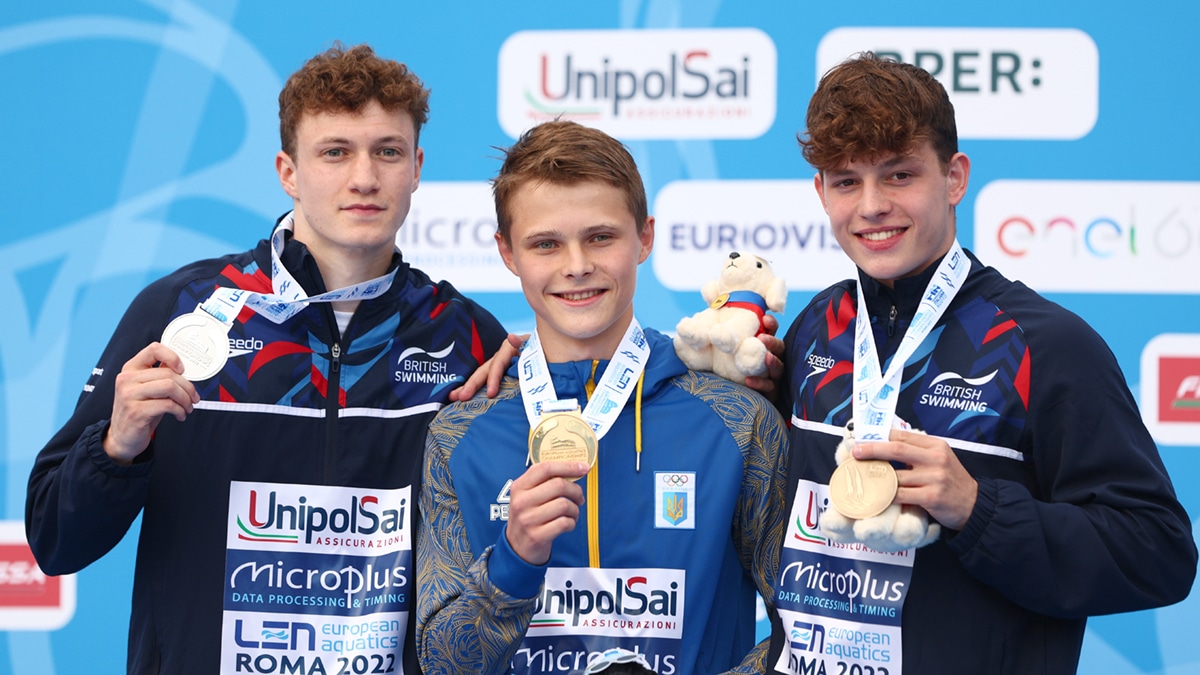 It was a first individual senior international medal for Cutmore, while Williams was pleased to bounce back into a podium place following a disappointing seventh-place finish at the Commonwealth Games.

Ukraine’s Oleksii Sereda took the gold with a final score of 493.55, with Williams 34.55 adrift in second and Cutmore a further 20.65 behind.

Williams best dive came in round four as he scored 86.40 points for his armstand back two somersaults, one-and-a-half twists and he ended with a total of 459.00.

Cutmore was also consistent throughout, scoring more than 70 points for each of his six dives.

His best score came in the final round when he earned 76.80 for his back two-and-a-half somersaults, one-and-a-half twists.

Cutmore said: “One week ago I didn’t even know I was to compete in an individual event.

“It was daunting at first, but then I felt confident and I was ready to go out and have a blast.

“I wanted to get on the podium, but I didn’t think I could do it so early.”

“This was our last competition and the most successful one for me and I’m really happy to come away with a medal at the end of a tough season.

“This will help me confidence-wise and now I need a little bit of rest!”