Luton Diving Club took three of the six golds on offer on the opening day of the Swim England National Skills Finals.

Luton almost swept the medals in the afternoon session taking five of the six medals up for grabs in the Group C1 and C2 Girls events.

Their success began in the morning session however when Joshua Saxton stormed his way to gold in the Group D2 boys event.

Saxton lead from the off, being the only diver to reach the 30-point mark on their opening attempt.

A score of 36.00 and 36.75 for his final two dives were his best of the competition as he ran out a comfortable winner with a total score of 349.10 for his twelve skills.

City of Leeds diver Dominic Emery took silver in his home pool with a total score of 297.20 after a strong showing.

Aberdeen’s Blair Crooks finished third with 296.70 but was competing as a guest meaning Plymouth’s Issac Ide was able to secure the final podium spot (293.15).

Both golds in the afternoon session went to Luton Diving Club as their divers won in both the Girls C1 and C2 categories.

Firstly, in the C1 event it was Kaila McCrickard who won gold after scoring a massive 317.10 from her twelve dives.

She finished nearly nine points clear of Plymouth’s Ava Cowper who was the only diver in the afternoon session with a medal that wasn’t from Luton.

Cowper scored 308.65 as she was the only other diver to score over the 300-point mark in the event.

Luton got themselves another diver on the podium as Elodie Biggam won bronze after scoring 284.30.

The Girls C2 followed next and it was an all purple podium as Luton swept the medal places.

Luton’s trio of Lois Fell-Cowen, Jessica Howarth and Aurelia Lee were the only three divers that could take home a medal that scored over 300 points.

Fell-Cowen was the pick of the bunch edging out her teammates to win gold after scoring 314.45.

Howarth followed closely and was just four points back with Lee third on 305.05.

Aberdeen’s Mia Pritchard scored 305.40 but was competed as a guest and hence couldn’t get onto the podium.

It brought an end to an incredible day for Luton and they will look to add to their impressive medal total tomorrow.

The event began with a good start for the hosts as the City of Leeds took two golds in the morning session.

The first Gold of the day went to Tallulah Taylor in the Group E Girls event after an impressive display where she was the only Group E girl to break 300-point barrier.

Tallulah also had the highest individual scoring skill with her back fall on the 3m that scored 33.60 from the judges.

She was closely followed by Sheffield’s Eimear Satherley who was just 5.15 points back on 297.20.

The event then got even better for Leeds as it was rounded off by another medal with Flo Hall securing the bronze.

She scored a total of 293.10 which was comfortably clear of the rest of the pack after an excellent array of dives.

The morning session was topped off by a one-two finish for Leeds in the Group D1 Boys category.

City of Leeds pair Lucas Bishop and Broggan Gainfort streaked clear of the field as the duo battled it out between themselves for top spot.

It was Bishop who took the gold in the end, finishing less than three points clear of his teammate.

They were over ten points clear of their nearest challenger with City of Sheffield’s James Bacon taking bronze.

Bacon ended up with a well-respected score of 281.40 to take the final spot on the podium. 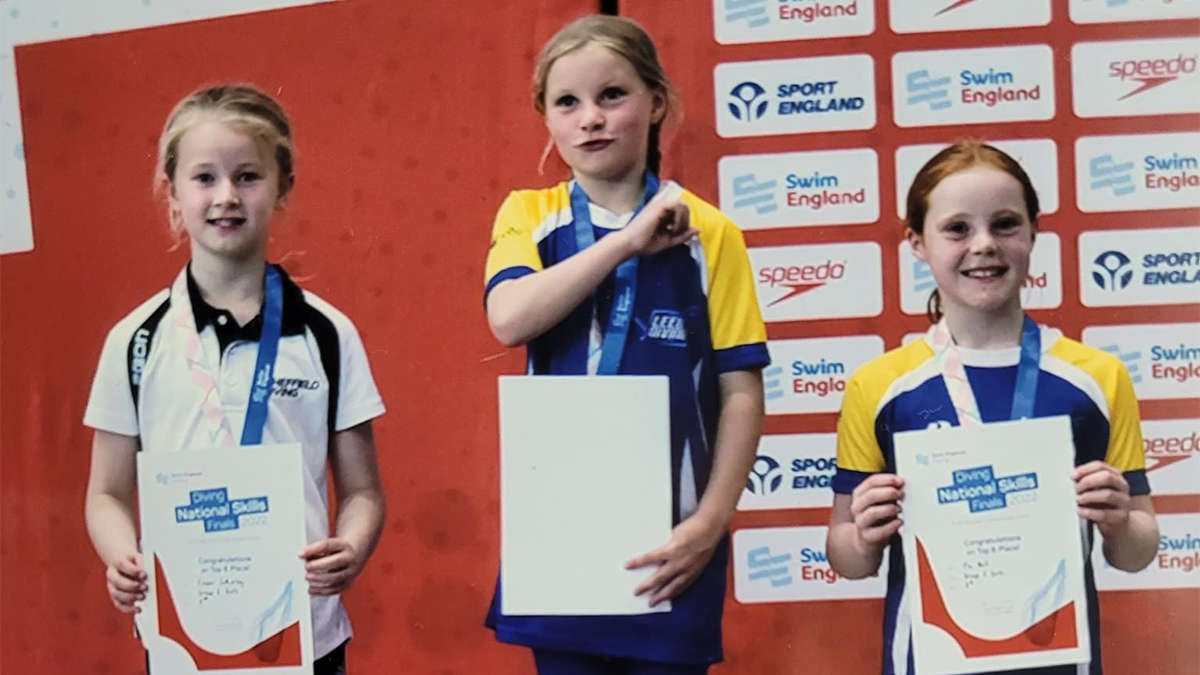 The City of Sheffield got on the gold medal board as Alex Christian clinched gold in the Group E boys event.

Christian had to come from behind to secure the overall win after guest entrant Alfie Odonnell (Edinburgh Diving Club) made a strong start to the competition as he surged into an early lead.

Odonnell held that lead for the majority of the contest with over an eight-point lead as the pair headed towards their final two skills.

As Odonnell was a guest the silver medal then went to Dive London Aquatics Clubs Jared Hull whose consistent display gave him a total of 269.95.

You can see all the results from day one here.