Tom Daley and Matty Lee have secured Great Britain’s second medal of the FINA World Championships – after bouncing back from a rare mistake.

They won bronze in the Men’s 10m Synchronised competition at the Nambu International Aquatics Centre, in Gwangju, Korea – and also booked their place at the Tokyo 2020 Olympic Games.

But they were made to work hard for third spot after a poor fifth dive almost lead to them missing out on a podium place.

Their reverse three-and-a-half somersaults in tuck position scored only 57.12 and saw them drop down from second to third.

That opened the door for the young Ukranian pair of Oleksii Sereda and Oleh Serbin and they put the pressure on the Brits with a final dive that scored 77.76 to leave them on 412.62.

Daley and Lee needed to score at least 76.63 in the last round to snatch bronze from the Ukrainians and their forward four-and-a-half somersaults in tuck position secured 89.91 points for a total of 425.91 – 13.29 ahead of fourth.

Lee said: “After the last dive we were just waiting to see whether our name came up first or second, which would mean we’d won a medal and it was a long wait.

“Finally second came up and I’m just so happy that we did it.”

Daley added: “I’ve never been in a position before where I’ve had a synchro partner the year before the Olympics.

“[We were] going up there knowing that if we got a medal we weren’t just world medallists, but we’d also qualify a spot for the Olympic Games for GB – so it’s a massive relief and job done.

“It feels so good, but now the mission starts for the individual event.

“It’s top 12 in that event to secure a spot at the Olympic Games and I’ve also got the Mixed 3m Synchro as well, so there’s lots still to come.” 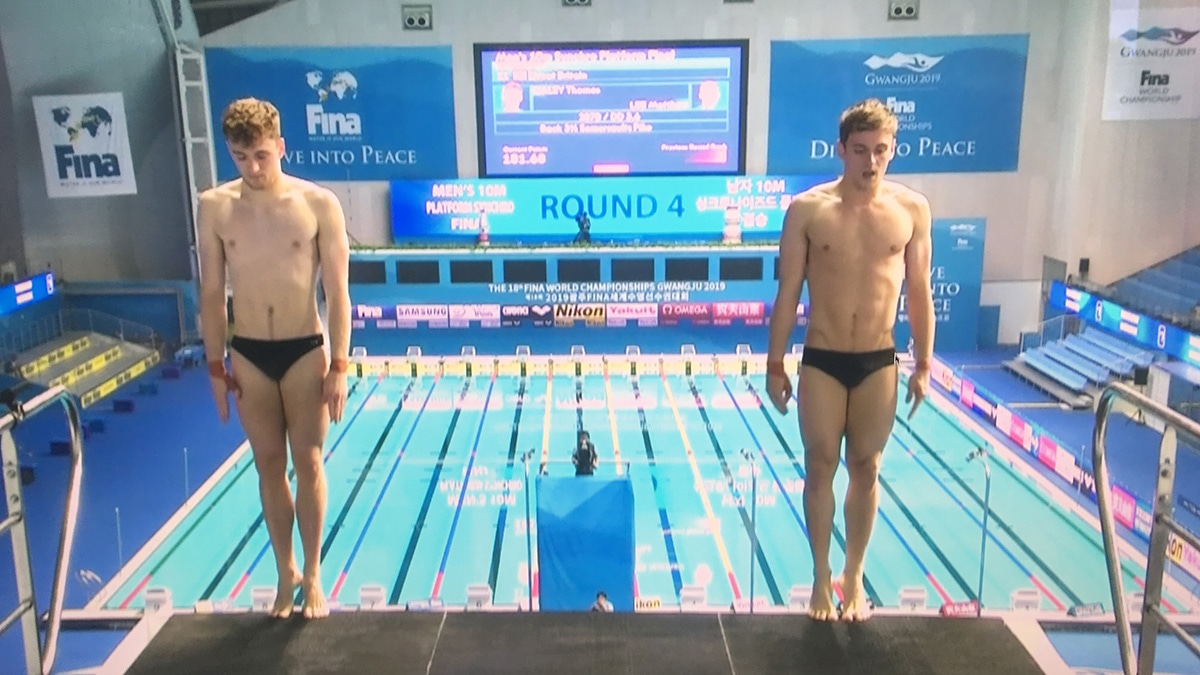 While they were relieved to have won the bronze, it was a case of what might have been for Daley and Lee as they were sat in the silver medal position with two dives remaining.

They showed their class in round four and with an almost near perfect dive.

Their back three-and-a-half somersaults in tuck position scored them a huge 97.20 to catapult them into second place.

That score was matched immediately by the Chinese duo of Yuan Can and Aisen Chen, leaving Daley and Lee 21.96 behind the leaders.

Importantly, the British duo had opened up an 18.3 point gap on the third-placed Russian duo of Viktor Minibaev and Aleksandr Bondar – and were 19.62 in front of the Ukrainians in fourth.

However, round five saw that cushion wiped out and the Russians took advantage to jump into second place.

Worringly, the Ukrainians were now only 1.14 points behind Daley and Lee.

Daley and Lee didn’t falter a second time, though, and sealed the bronze with another high-scoring dive – adding to the silver won by Jack Laugher and Daniel Goodfellow’s in the Men’s 3m Synchronised.

Minibaev and Bondar took the silver on 444.60, with Can and Chen comfortable winners with a score of 486.93.

Daley is next in action on Friday 19 July when he competes in the 10m Platform competition before taking part in the Mixed 3m Springboard Synchro on Saturday 20 July.