Two years ago today, the diving competition at the 2018 Commonwealth Games came to a close. It was a huge success for Jack Laugher, despite it being touch and go as to whether he would even compete on the Gold Coast, as Dan Richardson found out.

When Jack Laugher completed the first dive of the 2018 Commonwealth Games, it proved to be a remarkable comeback from an injury which had threatened to wreck his dreams of Gold Coast glory.

Two years after he returned from Australia with a hat-trick of gold medals, the City of Leeds diver has told how close he came to missing out on the Games due to an ankle problem.

After an impressive performance at the 2014 Commonwealth Games in Glasgow, where he won two golds, Laugher was hoping for even more success in Australia – only to suffer a major injury months prior to the event.

Despite little preparation, the 25-year-old did go one better on the Gold Coast, winning all three events he competed in.

He retained his 1m springboard title and finished on top of the podium in the 3m springboard and 3m synchronised springboard events – the latter alongside Chris Mears.

However, Laugher admitted he was nervous as he stepped out for his first event.

He said: “I was the first dive of the entire Commonwealth Games.

“I wasn’t expecting anything I just knew that if I went out there and did my best I’d be happy with how it went.

“I had quite a lot of pressure on me going into the Games due to getting two golds and a silver in 2014.

“That pressure came from myself mostly, but coming away with three golds was absolutely amazing considering that I had an ankle operation in December just before we went away.”

As a result of his injury, Laugher returned to diving only two weeks before Team England set off to Australia.

“I hadn’t recovered in time,” Laugher said. “The doctor said it was going to be between four and eight weeks and it ended up being more like 12 to 16.

“It was touch and go whether I was even going to attend the Commonwealth Games.

“But I was very lucky that I had a great team around me. We put a plan together, you might see from the photos that I had a lot of tape on my ankle and that’s how we tried to combat the issue. 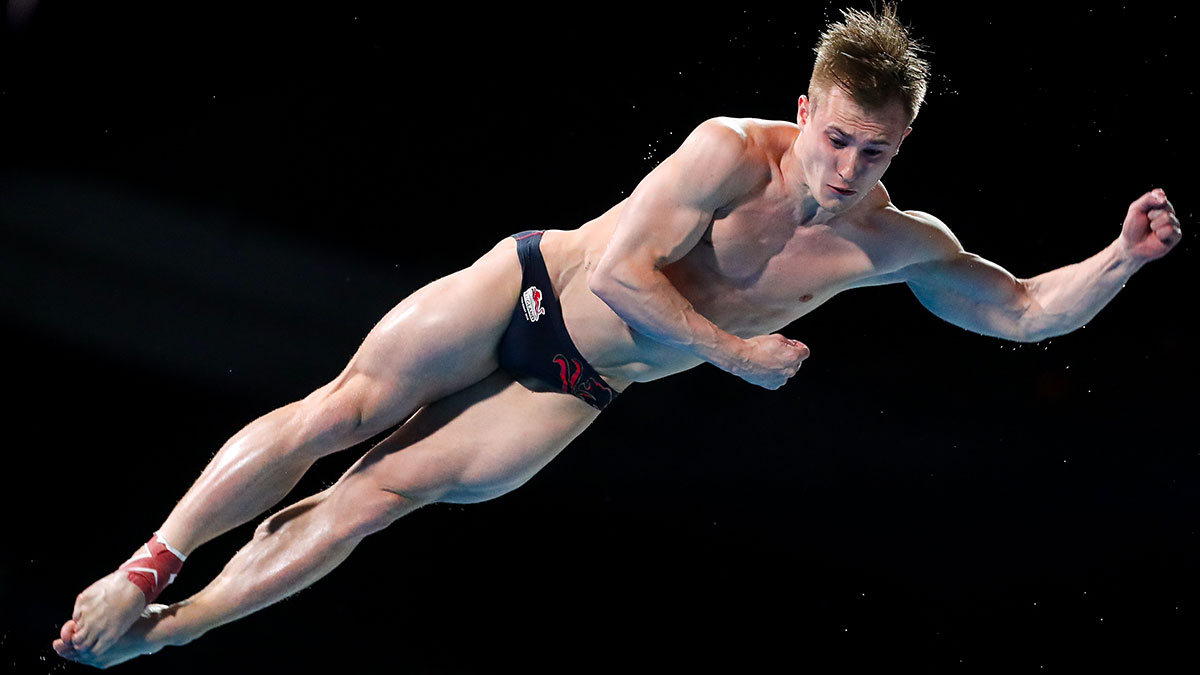 “But obviously with the little training that I’d had, I realised how a good performance could be very difficult.

“It wasn’t all perfect. I was having quite a difficult time and it was very difficult to get myself in that head space to compete again.

“I knew that there was so much on the line if I didn’t get back to full fitness and that’s where frustration started creeping in.

“If there was nothing to lose, if I had eight months to get better, it wouldn’t have mattered and I’d have been pretty calm and collected about it all.

“But because I knew that the Commonwealth Games was very quickly approaching and I knew that every day I was losing a day of training it was very stressful for me.

“I was wanting and trying so hard to get my ankle better but it wasn’t making the improvements that I needed.

“I trusted my medical support team entirely. My physiotherapist, Lucy Sharp, helped me so much.

“She was the number one contact and we had four or five sessions a week where she’d be stretching my ankle and really trying to rectify the problems that I had.

“We came up with the solution of taping it. It was my absolute last lifeline and it worked.

“So you’ve just got to trust in your medical team and trust in the people that are giving you advice. It can be quite a dark place, especially when diving means so much to me.

“The thought of maybe not doing it ever again was definitely there – it wasn’t getting better.

“It was probably the most difficult time I’ve ever had, but I’m really glad that I came out of it because now I’ve been through that I feel like I’m stronger as a person.”

Diving through the pain 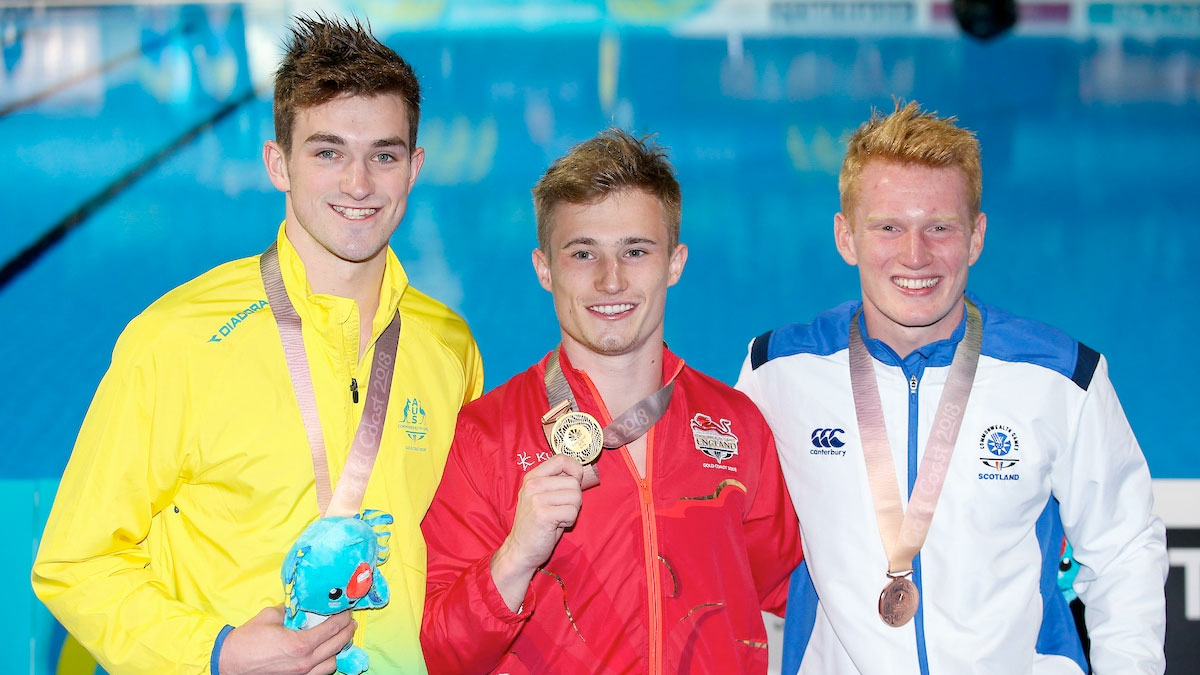 Laugher admitted he was still feeling considerable pain in his ankle a fortnight before the Games began.

“It wasn’t comfortable but I was able to do it,” he said. “Two weeks before, I wasn’t able to do anything backwards.

“As soon as I pushed into the board backwards, I’d get this really sharp pain in my ankle, like a screaming pain, like nine or 10 out of 10 soreness.

“With the tape, we restricted the range that my ankle could go to so that it wasn’t actually able to get to that point where I was in screaming pain.

“It would still be a little bit painful but enough that I would actually be able to dive and be able to get through the pain – it was trying to weigh up the balance between the two.

“It was annoying having to tape up my ankle for every single session – but it was worth it in the end.

“That’s the little sacrifices that you’ve got to do. It was annoying, it was difficult and it was painful – but I got through it.” 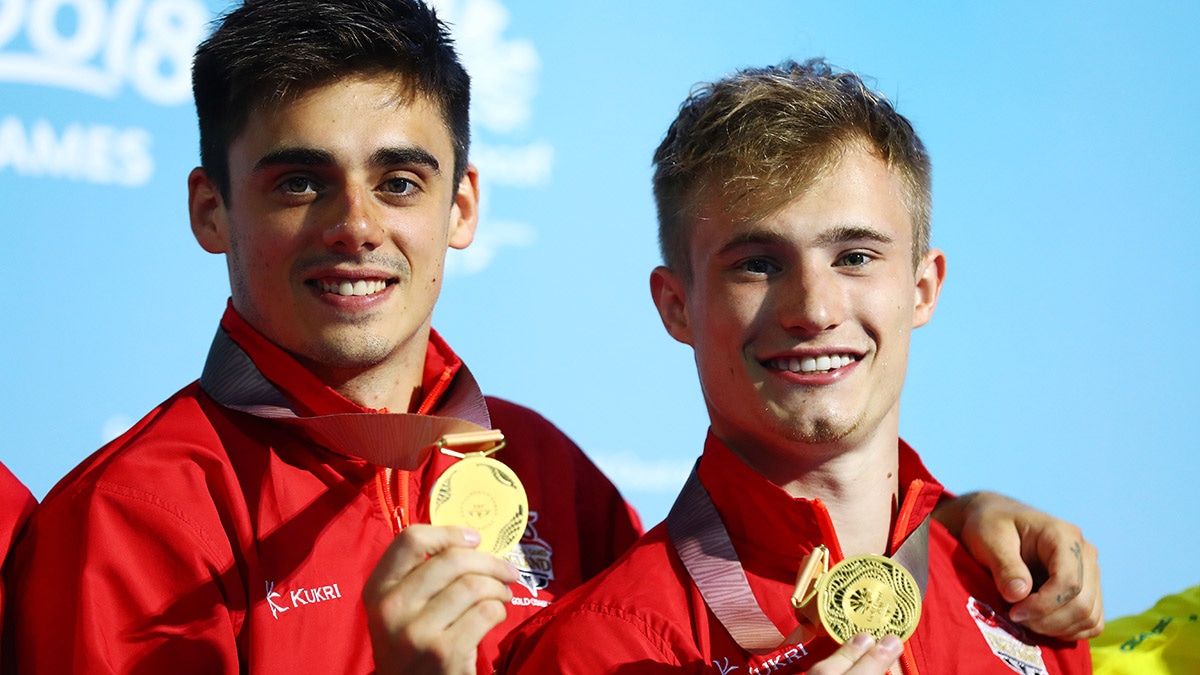 Laugher is a huge fan of the Commonwealth Games saying: “I really like them.

“It’s a really friendly competition. I think there’s less pressure involved than maybe other multi-sport games like the Olympics.

“Everyone seems a lot more calmed, chilled and just there to enjoy themselves so it was really good.

“We had a massive team of divers so it was really nice within our own team, but obviously being part of Team England and having all those other nations around you.

“It’s always called ‘the friendly games’ and I really do appreciate that because it is a really friendly place to be.

“There’s so many amazing things that were going on. Australia did a fantastic job of hosting the Commonwealth Games.

“When we got back everyone was just elated with how I’d done.

“My mum and dad were so happy and my girlfriend, Lois Toulson, was as well. She won a bronze medal so we had some celebrations back home with her family.

“It was really nice to be appreciated when we came back for all our hard work and dedication that we put into the sport.”