'I wanted to quit this year, so this means everything to me'

Olympic medallist Jack Laugher has spoken candidly about his struggles in diving over the past two years, revealing that he ‘wanted to quit quite a few times’.

The 26-year-old has just added another Olympic medal to his haul after he won bronze in the Men’s 3m Springboard final while competing in Tokyo.

After his win, Laugher detailed how winning the medal ‘means everything to him’ as he admitted that the last two years have been ‘the worst of his life’.

“This means everything to me, it has been the worst two years of my life,” he said. “After the 2019 World Championships and failing to make myself a world champion, embarrassing myself with my final dive and the mistakes and the failure that I had there, it crushed me.

“I landed on my back and not only cost myself a gold medal, I just had a shocker. After that, I kept making the same mistake over and over again.

“It put me in a place that was just terrible, crying myself to sleep quite a few times, I’ve had a lot of sleepless nights because I still make that same mistake.

“Up until two months ago at the Europeans, I did the exact same thing, I scored eight points in the preliminary on the back 3 1/2 because I just had no idea where I was. I had no confidence in myself, anxiety was through the roof and I was physically scared to do the dive.

“I wanted to quit this year, quite a few times – it’s been awful and I’ve hated it. But, we’ve worked really hard, my team around me have been the best ever, I can’t thank them enough.”

Here he is referring to his World Championships campaign in 2019 where heading into the final dive, he held a 30 point lead over his nearest competitor.

His final dive scored just 30.60 points and meant that he slipped from gold medal position to bronze. At the time, he said ‘that’s going to haunt me for the rest of my life’. 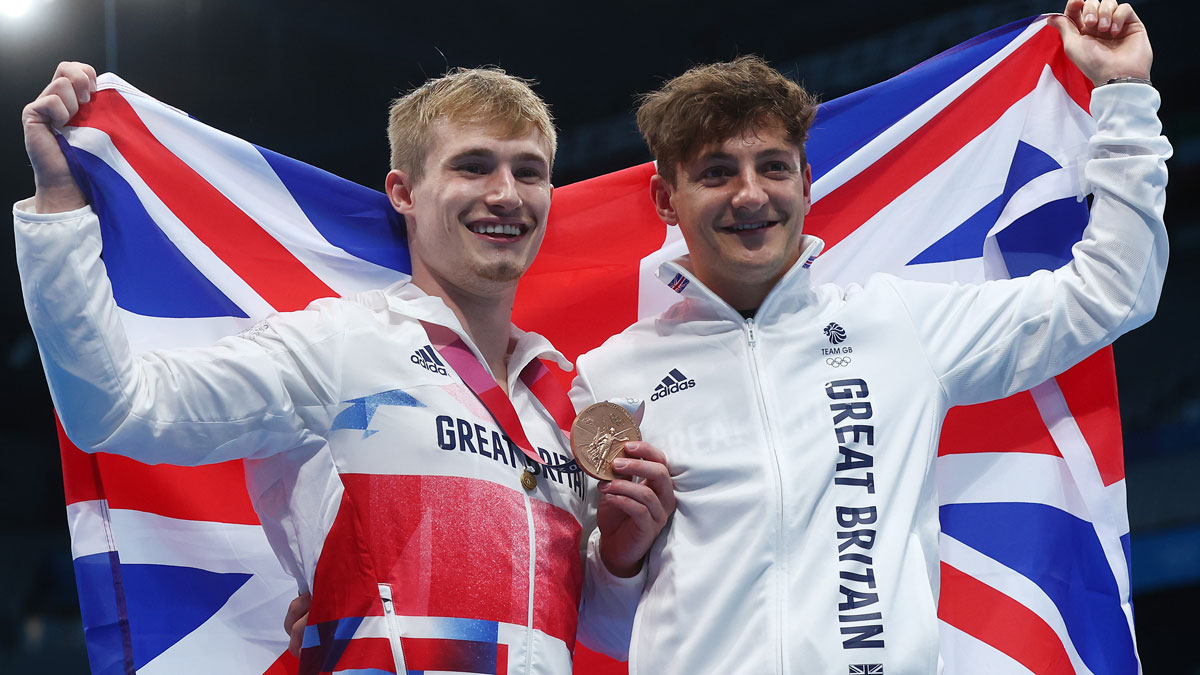 After the medal ceremony, Laugher commented on how his bronze medal ‘feels like redemption’.

“I feel like today is redemption for what has been such a bad couple of years,” he said. “It might not be a gold medal but a medal around my neck today is just the sense that I’m back, I’m here and I’m ready to keep going.”

He elaborated on just how difficult it was for him to process his performance in 2019, saying: “I can’t tell you how hard it is going to training every day and being scared of doing a skill because you don’t know where you are.

“To fail on such a big stage in front of so many people at something you’re so good at, it destroyed me. After that I had so little confidence in myself.

“This medal is redemption for the mistakes that I’ve made in the past in my career and I just feel great. All I was concerned about was just doing it well.

“Today, I’m really proud of myself with how I’ve handled myself.

‘Everyone around me has been my rock’

Laugher explained that without the support of those around him, he wouldn’t be where he is today and ‘can’t thank them enough’.

“The work that we’ve done after Europeans has got me into a place where I feel confident in myself again, I felt relaxed, I felt good and I feel like I’m back again.

“My girlfriend is a rock to me, she is everything to me and she’s my soundboard and when I’m having a bad day I just talk at her. Without her, I just don’t think I’d be here today doing this sport – she’s been fantastic.”

Working with his coach to ‘no longer chase perfection’ has been the key for Laugher in regaining his confidence, as he said:

“I had a bit of an epiphany after the European Championships and sort of noticed what I was doing wrong. Once we stripped that back and realised what makes me a diver and what techniques I have, my coach has let me go with it.

“We weren’t chasing perfection anymore, we were just ‘do you, be you’, do what you’ve done all your life.

“Without Lois [girlfriend], without my psychologist, Laura, without my coach Adam Smallwood, my amazing strength and conditioning people, my friends, my family, just everyone around me has been my rock.

“I feel like now is a time when I can just try and be the best version of me. I still have a few things to improve on but I feel like I’ve got momentum now to keep making improvements.

“Today I felt very concentrated on everything I was doing. My mentality, my state of mind throughout the entire competition today, I’m so proud of myself and where I’ve come and how I’ve done today.

“From where I’ve come from to where I am today, it really means the world to have this medal around my neck and to have achieved so much.”