‘I spent my life hiding behind the stereotypes and the stigmas... until now‘

Ed Accura first had a desire to learn to swim as a youngster in Ghana.

Swimming parties weren’t quite the same when he couldn’t get in the water but his requests for lessons went unanswered.

That isolated feeling returned during a holiday in Barbados as an adult, when Ed could only admire the glistening, still water from a boat – the only person wearing a life jacket.

But becoming a father meant the Buckinghamshire resident could hide no longer.

“I always had this thought in the back of my mind that if I was ever in a situation with my daughter and she fell into the water and she needed help, I wouldn’t be able to help her,” he said.

“That’s a scary thought. I think that’s one of the things that has really nudged me to learn how to swim.

“I spent the rest of my life, up until now, hiding behind the stereotypes and the stigmas of being black and swimming – all these stereotypes about heavy bones and such.

“I used it as a safety bed to not learn to swim. If anybody asked me if I could swim, I’d say ‘of course not, I’m black’.” 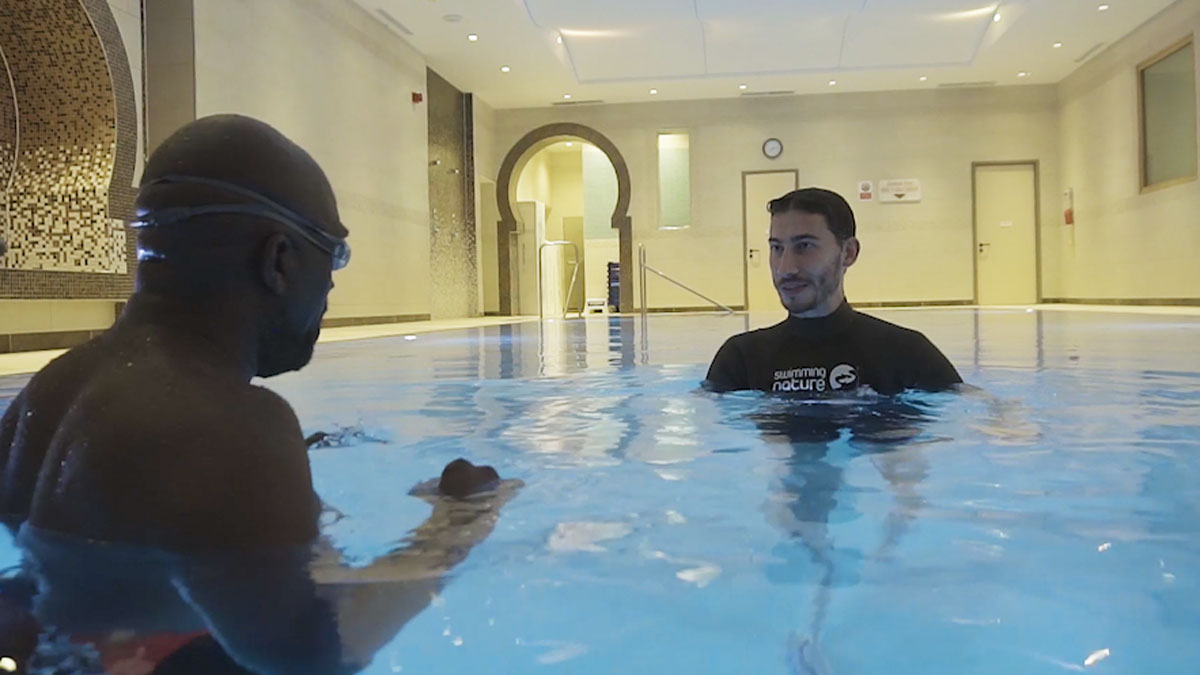 Ed admits he struggled to ‘trust the water’ but continues to take swimming lessons in what has proved a life-changing decision.

Having spent much of his life succumbing to perceptions, he decided to use his experience to spark change.

After initially planning to produce a song called ‘Blacks Can’t Swim’ to tackle the misconceptions associated with black people learning to swim, Ed took his idea to the next level by directing ‘A Film Called Blacks Can’t Swim’.

He wrote, produced and starred in the film.

In it, a frenzied Ed reacts to reports of flooding by wearing a life jacket everywhere he goes, frightened by the prospect of not being able to keep himself afloat.

There is obvious hyperbole but the film touches on the very real concerns many adults face if they weren’t taught to swim as a child.

Ed’s experience wasn’t a unique one and, through the film, he discovered a global community of people restricted by stereotypes, never learning to swim because it wasn’t ingrained in their culture.

“I didn’t for once think it would get the momentum and the attention it has received,” he added.

“But I was always going to put it out there anyway and try and get people to confront their fears, address the stereotypes and dispel the myths.

“I think the film is doing that. Role models are very, very important. If people can see it, they will believe it and they will do it.

“The Olympics are coming up next year, I just want to see a lot of people focusing on black swimmers and I’m going to keep on campaigning and keep on talking about it to drive more attention to black competitive swimmers, because I believe that is part of the solution.”

Ed has enjoyed positive reviews from all over the world, including the United States and Australia.

Since the film, he has started a weekly podcast called In The Deep End with Ed Accura.

Ed interviews BAME celebrities to talk about their positive experiences of swimming with the aim of encouraging more people from the ethnic community to take up swimming – both recreationally and competitively.

He said: “I figured that the more influential people of colour that I could get to talk about their personal experiences, the better the chances are of the community paying attention and recognising the importance of swimming.”

If you would like to view ‘A Film Called Blacks Can’t Swim’, visit blackscantswim.com.

Compared to other sports

Other articles from this section