Legend of the masters community Bernie Buck says he was emotional after being named the winner of the Cherriman Award.

“I was gobsmacked when I found out I’d won,” he said. “I was pretty emotional. It means an awful lot to have got something – not that we do it for that, we do it regardless.”

Bernie has covered a variety of roles of the years he has been involved with masters swimming.

He began as an announcer and commentator but has also been a committee member, an official, officials’ teacher and a coach.

But he says he couldn’t have done any of it if it weren’t for the support of his colleagues and family.

He said: “It was a bit of a shock – I’m always surprised that people think that much of me to be honest so to be recognised by the masters group as a whole across the country means an awful lot to me.

“I’ve seen it presented to so many people over the years, people far more worthy than I am to be honest and who have clearly done masses of work for masters swimming.

“So to be awarded it this year of all years is quite special for me.

“Particularly because I always get it in the neck from her because I sit in the back room at Sheffield and when she’s about to swim something always happens.

“About two minutes later she comes walking into the room asking ‘did you see my race?’ and I say ‘oh no I missed it’.

“I think I’ve missed her race so many times it’s a bit of a standing joke in the room now if Vicky’s swimming everyone will shout and I’ll go out and watch.

“I guess it all started way back in the mid 80s when my children started swimming and one Sunday morning someone was struggling with a lane rope.

“I gave a hand and they were about to have their club championships and someone said ‘we need an announcer’ and I said ‘I’ve watched swimming on the television so I’ll have a go’ and that was the first job I did.

“I enjoyed it and it became something that I got quite known for and I started doing commentary which was quite rare.

“I’ve announced at national competitions, masters competitions and I did the university one as well.

“It was extremely good fun and something I’ve devoted my life to in many ways as well as bringing up three children and somewhere in there I was working.

“One of my gurus, or somebody that I tried to base my work off, is David Robinson, who won the Alfred Turner Award recently.

“Dave was at Mildenhall and District Swimming Club when I first started swimming with my family. That was the first ever open meet we went to and it was so beautifully organised.

“I’ve got an eye for that anyway. I’ve always liked to look at the events and he’s been my mentor in many ways. Whenever I’m doing stuff he’s always at the back of my mind.

Swimming held our lives together 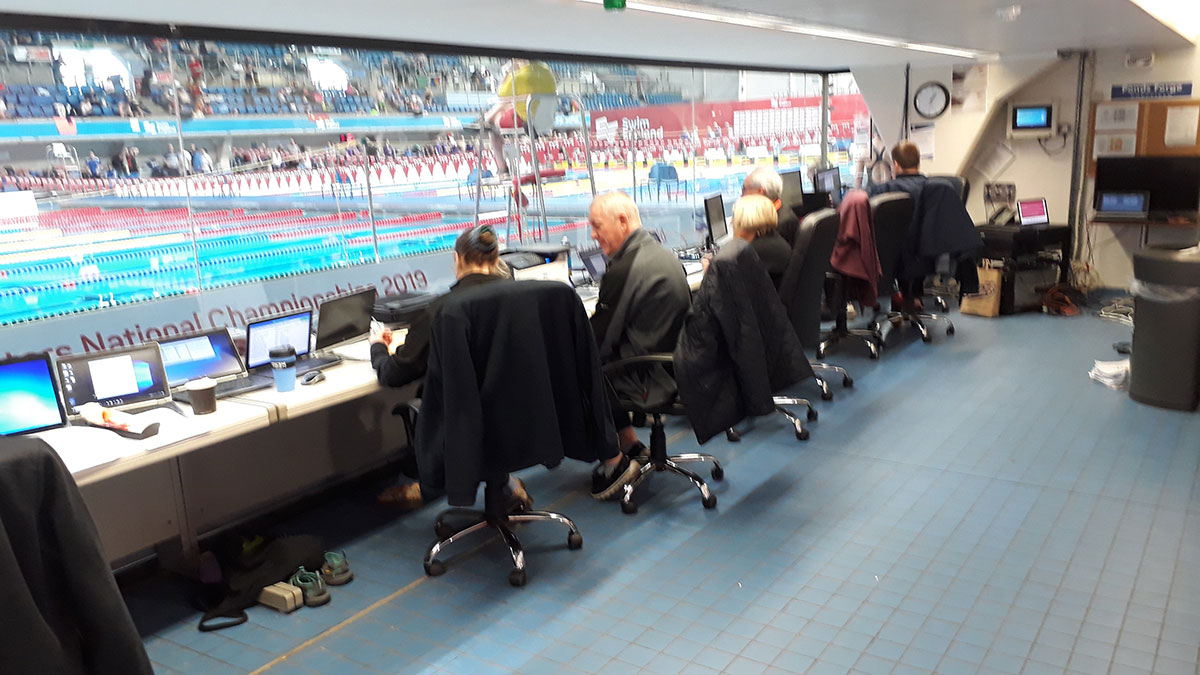 “I’m always looking to make improvements. You can never get it right first time, you’ve just got to keep looking at it and improving it.

“If it wasn’t an enjoyable experience, and you couldn’t have interaction with some great people, I wouldn’t be doing it – I would’ve packed it in years ago.

“But the teams that I’ve worked with, we just have so much enjoyment and so much fun.

“It’s that togetherness that we seem to be able to generate without actually trying – it just seems to happen.

“The feeling is a really good one. When you come away from one of those competitions my mind buzzes for days afterwards – it takes forever to come down.

“It’s been a long journey but it’s been part of my life – it’s held our lives together.

“We had some tricky times back in the 90s and swimming was our go to. It kept us going and kept us in the right place and it’s still there now and will be forever more I think.”