Her record-breaking times were the Masters phenomenon of 2015 – but there may be even more to come from Emma Gage, says Verity Dobbie in the December 2015 edition of Swimming Times magazine.

I’m not sure what the collective noun is for a group of Emmas but I first met 26-year old Emma Gage and her support crew (confusingly known as Emma and Em!) in Kazan in August as we were all patiently standing in line, enduring the most bureaucratic and unnecessary accreditation system that man has ever devised.

I struck up a conversation with them and while I was switched on enough to realise that I’d just reported on Emma’s British Masters record at Manchester in the 50m Fly, I was blissfully unaware that the rather tall and quietly spoken swimmer I’d just encountered would turn out to be the swimming phenomenon of the 16th FINA World Masters Championships.

The first inkling of Emma’s ability came on day two of the meet. Seeded second fastest in the 100m Freestyle by the smallest of margins, she powered off the blocks, turning in 27.41, and demolished the opposition to set a new Masters world record of 56.96 and a PB by over a second.

Next up, we were treated to an  awesome display of speed and  power in back-to-back sprint  events, which provided Emma with a second Masters world record of 27.10 for 50m Fly (a time which would place her sixth in the British elite rankings) followed by a championship best performance in the 50m Freestyle with 25.73.

Her 100m Fly was also under the existing Masters world record, behind a Russian who had just competed in the elite World Championships.

Emma rounded off the week with two silver medals and two further PBs in the 100m Fly and the 200m IM. Notably, her 100m Fly was also under the existing Masters world record, behind a Russian who had just competed in the elite World Championships. 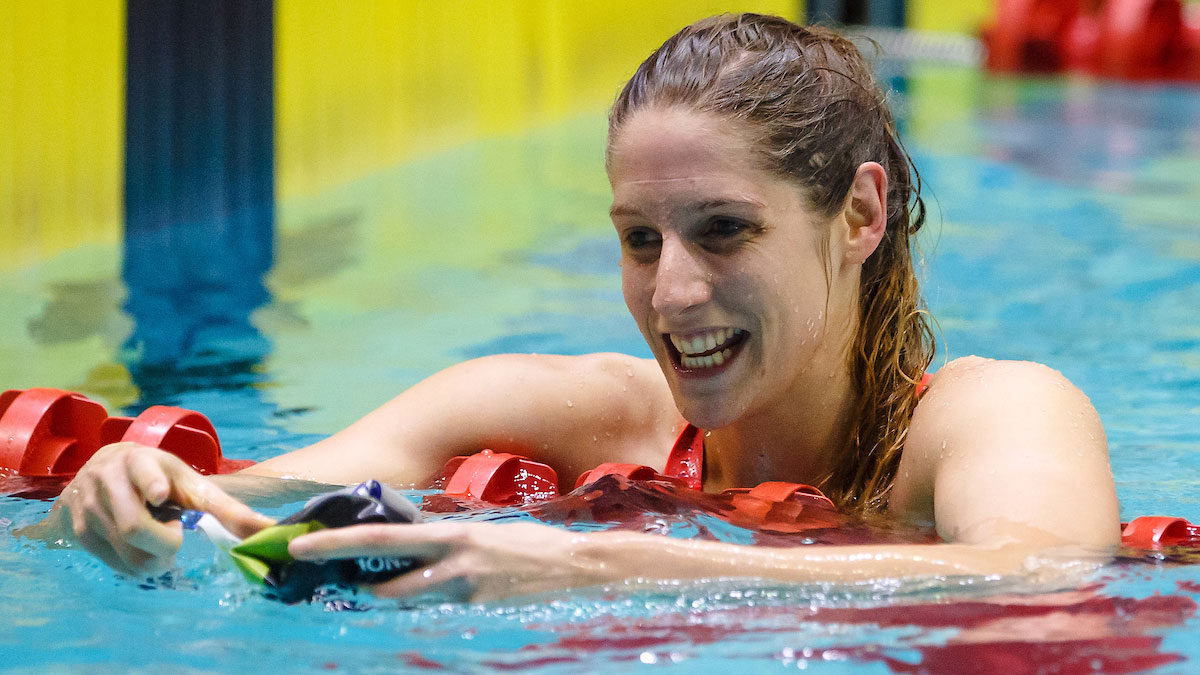 Over the course of the week, I spoke to Emma about her swims on a couple of occasions. To say that she was ‘chuffed’ with her performances is an understatement.

She was absolutely astounded by how well she was swimming and it was inspiring to watch someone on the top of their game and thriving in the world championship atmosphere.

It turns out that Emma has a considerable swimming heritage, being one of the original ‘Sweetenham babes’. She was an accomplished age-group distance swimmer and a member of the world-class potential squad.

Emma said her previous claim to  fame was that for a three-month  period in her youth, she topped  the British rankings in the 800m  freestyle ahead of a certain  Rebecca Adlington.

Although, in a typical display of humility, she was quick to add that in a recent conversation with Adlington’s husband Harry Needs, the conditioning coach at her club, she learned that the 2008 Olympic 400m and 800m champion couldn’t remember her.

Emma stopped swimming at the age of 16. She wistfully recounts giving up the sport as if it were a struggle, and explains the difficulties she was experiencing at the time, including a series of disappointments in the pool, a couple of serious injuries and GCSEs.

She went on to swim at university and, on graduating, moved into her first full-time job in recruitment.

Emma was introduced to CrossFit – a strength and conditioning programme consisting mainly of a mix of aerobic exercises, calisthenics and Olympic weightlifting.

Unable to find a Masters programme to fit around her work, she began a four-year dry spell when she was completely out of the pool, although during this time she attempted to conquer her fear of the wild swimming environment for triathlon purposes.

Obviously not one to sit around doing nothing, Emma was introduced to CrossFit, a strength-and-conditioning programme consisting mainly of a mix of aerobic exercise, calisthenics (bodyweight exercises), and Olympic weightlifting.

Under the gaze of her CrossFit coach and Kazan travelling companion, Em Saville, she threw herself into the fitness regime, and when she took on a new job with Em at the Q-Dos Fitness gym in Heald Green, Manchester two years ago, everything was in place.

In 2014, on holiday in Kefalonia with Em Saville, they were involved in a very serious motorbike accident, when the bike they were on failed to take a corner (due to a steering lock failure) and carried on over a barrier to the edge of a cliff.

Em suffered a badly fractured tibia and fibia while Emma also suffered some serious and fairly nauseating injuries to her leg (she has the pictures in all the gory detail on her her iPhone).

She recounts her disbelief when she was told her split for a 50m Free was 26 seconds – a lifetime best by a streak.

Recovered from the accident and with this conditioning background behind her, the stage was set for her return in the pool.

In November last year, she was persuaded (allegedly by Nev Barton and Laura Bowden, ex Stockport Metro teammate) to turn out for Cheshire in the ASA Inter-County Masters competition, and recounts her disbelief when she was told her split for a 50m Free in a team race was 26 seconds – a lifetime best by a streak.

With her love for swimming rekindled, Emma joined Trafford Metro and swam with their Masters squad three times a week, supplementing her water work with five sessions of CrossFit.

Since returning from Kazan, Emma has returned to her old club, Stockport Metro, after a Facebook approach from her former coach, Sean Kelly.

Emma had posted her result and time for the 50m Fly and Sean responded: ‘That is seriously quick – we need to talk.’

Emma’s relationship with Sean is one of mutual respect. He recognises that, although her training may be a little unorthodox, it works for her.

Currently swimming five two-hour sessions per week, Emma’s plan is to increase her water work by another four hours while maintaining the gym work.

Having decided to give swimming another go, Emma is enjoying every minute of it, even though, on occasions, she finds the training regime demanding, and draining as she continues to hold down a full-time job (albeit in the gym where she trains).