'You’re never too old'… John Harrison, 104, on his record-breaking achievements

Peter Hassall looks back at the career and achievements of incredible Masters swimmer, John Harrison

If you ever fancy watching something inspiring to do with swimming, go to YouTube and watch John Harrison doing the 50m Backstroke in 2014.

There’s a packed pool for his world record attempt and initially John is not even in shot as the swim is announced but he appears from the left and acknowledges the cheers, yellow cap and black goggles, and enters the water.

They’re off and John is soon into his Old English Backstroke – albeit as the rest of the field disappears – and at the 25m turn, which he touches with his head, the many youngsters on the side are cheering and clapping.

It is truly inspiring as John powers down the stretch, (ok I may be exaggerating a little), but the noise gets louder and louder as he comes in to finish, again with his head, and raises one arm in triumph.

He has broken the 100-104 years world record by 15 seconds! Yes, you read that correctly. The 100 to 104 years group! A time of 1:29.78. The first ever British man to set records in that age group. The applause is long-lasting and heartfelt from all the crowd, officials and swimmers. An amazing moment.

Later, I asked him how it felt?

I don’t want to take any credit, well maybe just a teeny bit, but I wrote an article on John 15 years ago in which I challenged him to become the first British man to set swimming records in the 100-104 age group. “That would be quite an achievement,” I put.

And according to John, it was inspiring.

“I will never forget the challenge you set me a few years back,” he said. “Maybe when I was 90 and you challenged me to keep swimming until I was 100; that was the best thing that anyone ever did for me because it set me off again with swimming and it kept me going… and I’m still going.”

He went on to set three more short course British records in 2014 in the 100-104 age group and three long course marks at Crawley.

All of which meant he was named Sports Personality of the Year at the 2014 Sport Godalming Awards in recognition of his achievements in the pool. And he was also the ASA’s senior swimmer of that year.

He is also the only British man (or woman) to feature in the 95-99 age group, holding four freestyle and two backstroke short course marks whilst for long course, he has five British records.

Having said that, since his 102nd birthday, he’s not swimming much, but he tries to keep fit by doing exercises with straps including swimming exercises and, occasionally, butterfly!

And believe it or not, when I spoke to him last, he was looking forward to breaking world masters records this year , when he is 105 – “‘if I’m still here.”

John is a man full of good humour. He was born in Farnborough on 25 July, 1914. And he even has a quip about that. “They heard about it and started a War!”

And his start in swimming was novel.

“When I was five years old, on the way home from school, we came past an old Army horse pond,” he said. “So we went skinny dipping. It taught me two things. One, to swim; and two, not to drink the water.

“My parents found out two years later that I was still doing it, and I got the thrashing of my life. When my father had finished thrashing me, I said, ‘I didn’t get asthma last winter’. My mother said, ‘No, you didn’t…’ They both looked at one another. They then bought me a costume and taught me how to swim.’

John went on to serve with the Royal Navy during the Second World War. “Yes,” he said, “I joined the navy in 1937 and they started another War!”

He was injured in a explosion while serving aboard HMS Belfast off the Scottish coast: injuries which later saw him invalided out of the Navy. He says his recovery from his injuries, both physical and psychological, was helped by playing the piano: he is a talented classical pianist.

Married to his late wife, Doris, for 74 years, John’s piano playing impressed her at the start. “We had Sunday lunch with my parents,” he recalled. “I excused myself and went into the front room and started to play a Chopin waltz. She came in and started to say ‘Turn that off..’ but she realised it was me playing. I got through the first bar: we waltzed together for 74 years.”

After the War, the couple spent six years in Nigeria where John worked at the Tropical Testing Establishment doing research into ways of retarding fungal growth on instruments before returning to the UK, where their daughter, Coral, was born.

John then moved on to rocket research at Christchurch, then signals research followed by central electricity research at Leatherhead until retirement.

Only then did John start to concentrate on water-based activities, teaching sub-aqua and then swimming and lifesaving for about three years.

“But then my wife told me it was time to give that up as well and take up swimming for myself. I was 79 years old.”

The secret of a long and active life 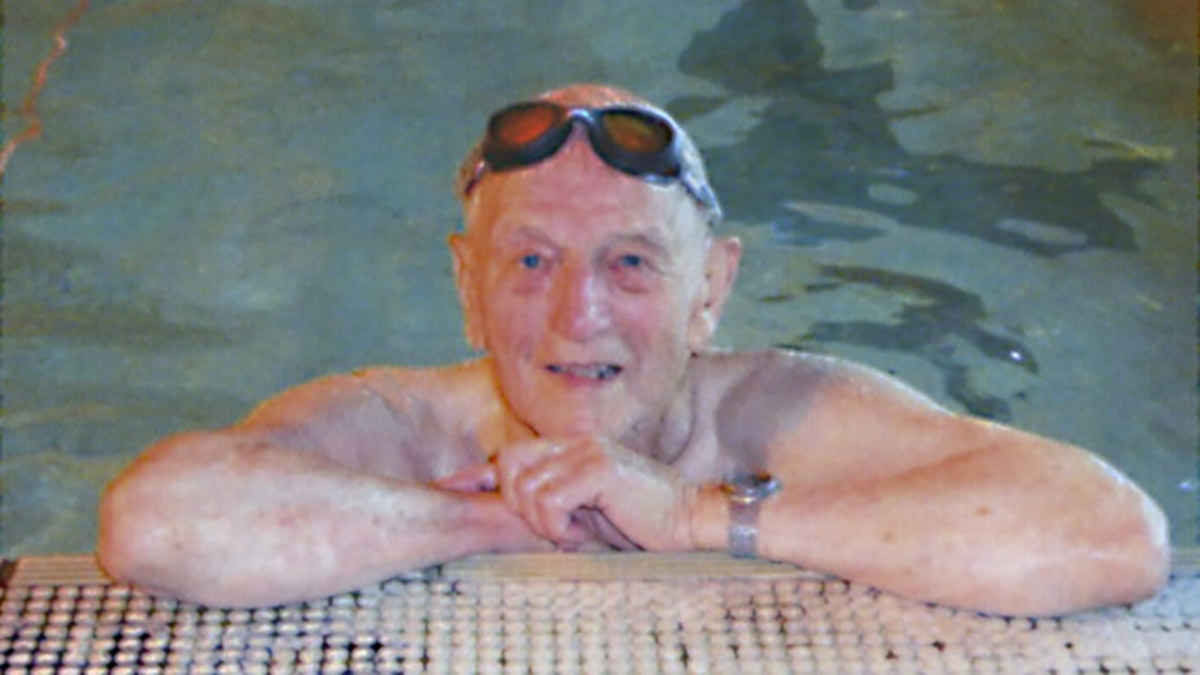 He began to enter galas and then the national masters at Ponds Forge representing the Royal Navy.

“Yes, I will always remember that,” John said. “A man of 85, I think it was Roy Hodges, beat me at 79 and I thought this has got to change. After that I really went for it and started doing quite a lot all over the place….and I would say one of my best experiences in swimming was when I started to overtake those people four or five years younger than me and get all the records. I was quite pleased with myself.

“And,” he continued, “if I had to pick out another highlight it would be when I was invited to a garden party at Buckingham Palace in recognition of my swimming. That was an excellent day.”

His records across the age groups are too numerous to mention but it is his longevity that is most remarkable.

And John’s secret of such a long and active life?

“Do everything in moderation. That’s one thing my father taught me. But really, it’s a four-letter word: luck,” he said.

“I was lucky when I was on the HMS Belfast (now a tourist attraction in London) and we hit a mine. It was hell of a bang and distorted the A turret which was 750 tons. I was below deck and when I realised I wasn’t dead, I thought I’d better get out. We only just made it back to dock and it took two and a half years to repair.

“Then I was lucky that all the crew except me went on to the HMS Hood which was later lost with only three survivors.”

John used be one of the ex-servicemen employed by the Navy to host tours around the Belfast at its dock on the south bank close to Tower Bridge, but he has another bit of ‘luck’ (though I’m not quite sure that’s the right word) to describe: “Yes my wife Doris, without her support and blessing, I could not have enjoyed my swimming career.”

Since his wife died several years ago, John lives in a retirement home ground floor flat with patio where he can drink his beer. “Yes, no windows to clean or trees to trim, it’s great; the only thing I have to do is eat my meals – and they’re supplied!”

Appreciated the support and encouragement 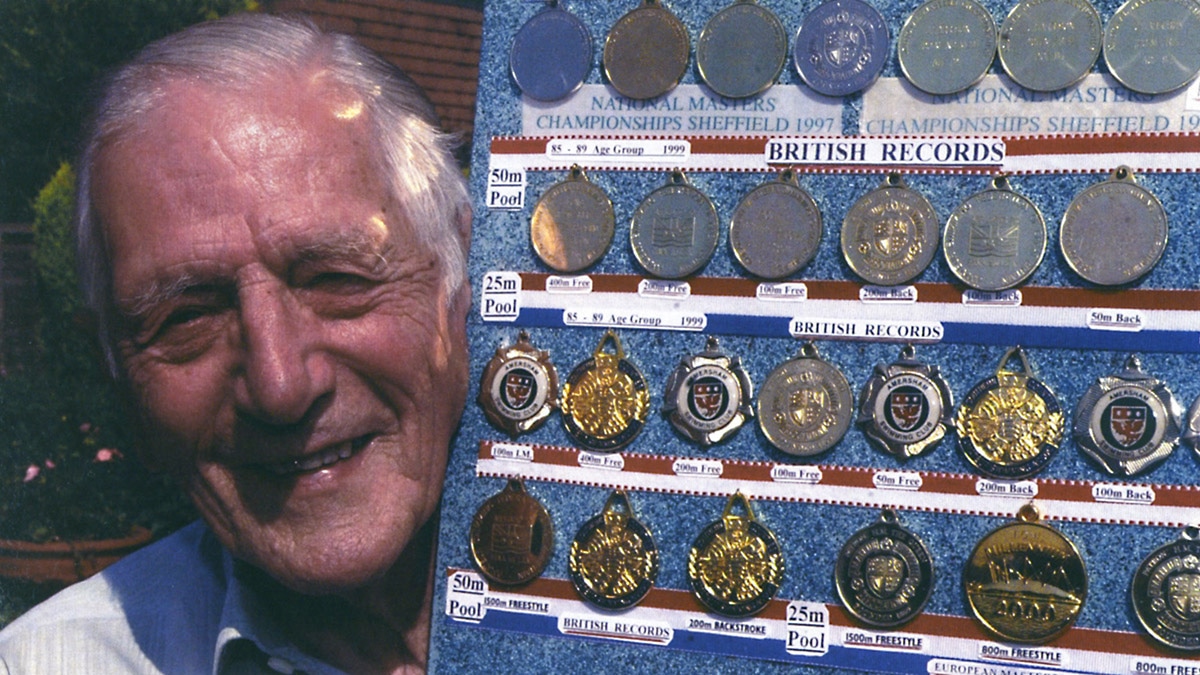 He doesn’t drive as the police previously advised him not to due to the possibility of being targeted for insurance scams. He’s still walking ok though and gets taken out every week to the local pub for a meal and a beer.

I don’t think he would mind me putting that he occasionally has trouble with his hearing (yes at 104!) and he admitted to me, quite eloquently, that ‘at the present moment, I’m going through rather an unstable state…but it comes right fortunately…’

“Are you still keeping fit?” I asked hopefully. “Yes, I’m still doing all the exercises on the rubber straps..”

I smiled at his reply when I asked him again about swimming in the 105 years age group. “Yes, I’m thinking about it and training for it…

“I sometimes have a slight problem with my memory which is frustrating – and I never know what to do with my spare gold!” (I think he meant his medals.) “But I’m a big believer in the fact that if you don’t use them, you lose them, that’s why I try and keep fit.”

I thought I might go and visit him and give him some training and coaching for the next world record. “Oh, I already have plenty of coaching from the local hotel – in the consumption of beer! But I do look forward to you coming down for that beer!”

“I have enjoyed and appreciated the support and encouragement I have received over the years, or should I say since I started at the age of 79, and I hope my swimming has inspired a few other people.

“If anyone follows my example, we will have a fitter nation and that would be a good thing. I say to anyone reading this: keep doing your best and if you come in last, so what. You have done the swim and will be the envy of others who don’t try.