He completed 2.3 million strokes, burned 504,732 calories, was stung 37 times by jellyfish and spent 23 weeks at sea – now adventurer Ross Edgley is reflecting on life on dry land after finishing the Great British Swim.

Ross, of Grantham, Lincolnshire, celebrated his 33rd birthday during his 157-day, 1,792-mile trip around the coastline of mainland Great Britain.

He was welcomed home to Margate yesterday by his family, friends, huge crowds along the beach and 400 swimmers from the Outdoor Swimming Society who swam the final stretch of the epic journey alongside him.

Record-breaker Ross, who first stepped into the water on 1 June said: “Setting out, I knew the Great British Swim would be the hardest thing I’ve ever attempted. I can’t really believe we’ve done it.

“I was very naïve at the start of the whole thing, and there were moments where I really did begin to question myself. My feelings now are pride, tiredness and relief.

“It’s been a team effort and it’s thanks to the whole crew, the support I’ve received from the public and Red Bull that I’ve been able to complete it. To see so many smiling faces here is amazing, and if I can take one thing away from this whole experience, it’s that I’ve inspired people to go out there and challenge themselves, no matter how small that inspiration may be.”

His friend, Ant Middleton, hailed Ross as a ‘true British hero’ and said: “His feat of swimming around Great Britain will likely never be repeated.

“The mental and physical strength required to swim day and night for five months, to cover close to 1,800 miles is just super human. It is astonishing and I could not be prouder to salute his achievement.

“Ross is one of the most humble, yet insipiring people you will ever meet, and he certainly deserves to have his name recorded in the history books.” 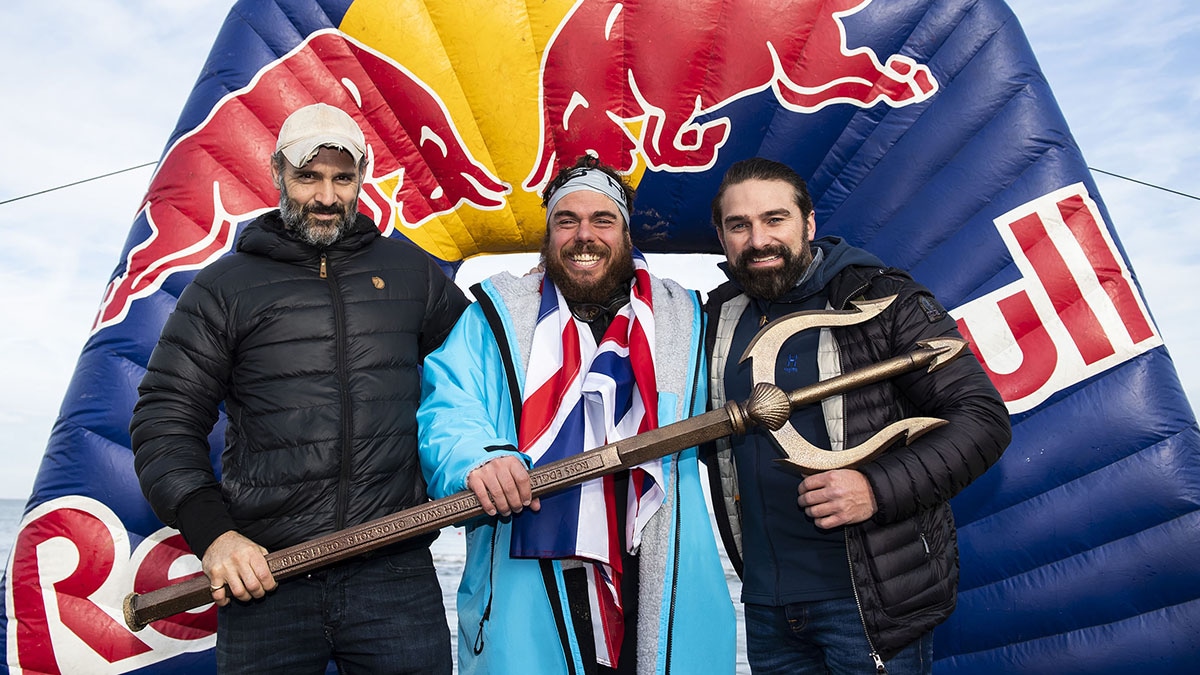 In order to finish his mammoth challenge, Ross completed up to 40,000 strokes per day, swimming in six hour stints, day and night, whilst taking the six hours in between to rest and recover aboard the sailing vessel Hecate.

Veteran sea captain Matt Knight skippered the boat, plotting the safest and most efficient route in order to maximise Ross’s chances of completion.

He said: “I’m tremendously proud of Ross for completing the Great British Swim.

“When he first approached me and said he wanted to swim around Britain, I think I was one of the only people who took him seriously. I knew the challenge was possible, but it would take a very special person to complete it. Someone able to endure everything mother nature could conjur up.

“Britain is beautiful. Especially when you have the pleasure to look upon the coast from the sea. My memories of the Great British Swim will last forever. My family have been part of the crew with my wife, two daughters and my son on the boat throughout the challenge. It has brought us closer together and Ross has become a lifelong friend to us.”

The Great British Swim took  a huge toll on Ross and he suffered a disintegrating tongue caused by exposure to seawater, extreme wetsuit chaffing – which resulted in scarring on his neck – and even a suspected torn shoulder, suffered on the North East coast of England.

But he did not take a day off through sickness or injury, with the only stoppages on his journey enforced by the extreme winds and waves caused by Storm Callum and Storm Ali.

He ate between 10,000 and 15,000 calories each day, consuming calorie-rich, high-carbohydrate food including porridge oats, rice pudding, noodles, pizza and pasta as well as coconut oil and nut butters for fats and super green shakes and multivitamins for micronutrients.

That’s not forgetting the unsung hero of the Great British Swim – the humble banana – of which Ross ate an incredible 610.

Following his record-breaking swim, Ross has been invited to be a speaker at this year’s World Open Water Swimming Association (WOWSA) Open Water Summit, which takes place in November at The Olympic Club in San Francisco.