Not only do they have Devon-based Mount Kelly in common, they are also both part of the LGBTQ+ community.

Here director of swimming Emma and assistant director Greg describe how swimming and coaching shaped their journey to happiness – and how they have created an inclusive environment at the school.

An internal struggle of self-acceptance at different times of life led Emma and Greg to different coaching journeys.

Now they are doing everything they can to ensure that swimmers and young people don’t face the same problems they did and they understand that it is acceptable to be whoever you want to be.

Working in education and performance sport brings its own challenges in the modern world – and at times it felt like a long and lonely road for Emma.

“As a young athlete, I felt defined by swimming and my sexuality,” Emma said.

“However, I was deeply in the closet which meant that when I retired from competition, I felt a huge void.

“In the early years of moving into coaching, the thought of having a positive effect on the lives of others was exciting but being petrified of someone finding out I was gay consumed me.

“I now lead one of the best programmes in the country with 178 swimmers and eight coaches – but getting here has been a battle, both internal and external.

“The battle has made me a better coach.

“I’m now more patient, level-headed, and understanding. My main coaching strength now is the relationships I build with colleagues and swimmers.”

Greg’s journey is very different but still presented challenges along the way.

“Growing up in sport, I felt a strong desire to just be normal and follow the stereotypical path in life,” said Greg.

“I was afraid to admit to myself that I was part of the LGBTQ+ community and longed for this aspect of my life to just be a phase.

“It wasn’t until I moved to Mount Kelly and met Emma that I found the confidence to accept who I was because I was in an environment where it was accepted to be different.”

Emma feared that being herself was going to ‘harm her coaching career’ and it was moving to Mount Kelly that proved to be the turning point.

“Growing up in swimming, there were no out role models,” said Emma. “No one to say everything would be okay.

“If there had been, I may have started living my truth earlier.

“Historically, there has been a distinct lack of women’s performance coaches and this was enough of a challenge in itself.

“Female coaches were widely discredited and had to fight for accreditation. Female coaches sometimes are not taken seriously and have been described to have ‘male’ personality traits to be successful.

“When experiencing these comments, and then adding on my sexuality, its no wonder I felt that being myself was going to harm my career.

“I have heard comments such as ‘women had no place on poolside’ and that female athletes were ‘mentally too weak’ to emulate the achievements of their male counterparts.

“I was constantly on the end of smutty remarks and gossip which held me back from accepting myself and I feared that others learning about my sexuality could end my career early on.

“This was enough to hold me back in my career. I often say a happy swimmer is a fast swimmer and I feel this extends to coaching.”

Emma said: “I soon realised that, although some people can be cruel and vicious with comments I was in a friendly, kind, supportive environment.

“Here I met Greg, a 20-year-old coach who had just started out in his pursuit of coaching success.”

During their time at Mount Kelly, both Emma and Greg met their now wife and husband and both couples got married in 2017.

This step in their lives made their desire to be positive role models for the next generation even stronger.

Being role models and making progress 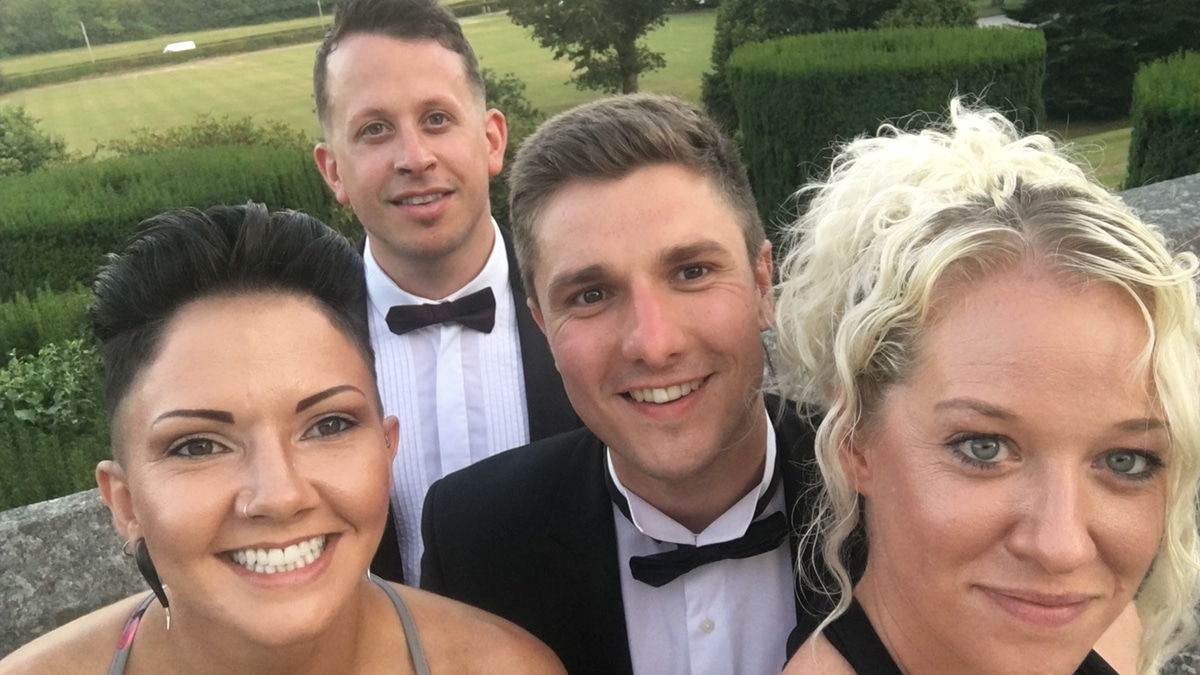 Emma said: “In 2017, I married Amy and the weight of all those negative experiences fell away and my focus went onto trying to be as visible as possible and becoming the role model I never had growing up.”

Greg added: “When Chris and I got married, everything just seemed to make sense, and it was such an incredible feeling for the whole Mount Kelly community, from swimmers to staff and parents, to support us during this phase of our lives.

“I wish I had known more LGBTQ+ people growing up as I genuinely believe it would have led me to self-acceptance at an even earlier age.”

Now, Emma and Greg have become role models to pupils at Mount Kelly and although they still receive pre-conceived prejudices, they recognise that progress has been made.

Initiatives such as British Swimming’s Pride in Water is helping provide safe and inclusive environments for all.

Greg said: “We both collectively want to help young people who are also LGBTQ+ understand that they’re so much more than that – musicians, mathematicians, and of course, sportsmen and sportswomen.

“Your sexuality and sport to that extent do not define you and it is so important to live your truth always.”

Emma added: “At Mount Kelly, we aim to promote a safe environment where we live by our values and respect each other’s differences, whether that’s interests, culture, opinions, sexuality, or gender.

“Some challenges remain. The world is becoming more accepting but there are still certain stigmas attached to LGBTQ+ athletes and the sports they play.

“For many, the coming out process is therapeutic and about acceptance. World-class coaching is about understanding that athletes are people – getting to know them adds layers onto the level at which you can coach to.

“We must be patient and allow for different coping strategies and personalities – validate, acknowledge, and move on to making that individual the best athlete they can be.”

“There are times when we still get judged. People hide behind a tweet or an online post. However, we both feel strong enough to lead others through any hurt and upset and turn that into passion and pride.

“The experience we’ve created at Mount Kelly stands apart in the values and attitudes of its young men and women – compassion, integrity, generosity of spirit and commitment.

“Fear must never be something an LGBTQ+ person feels when taking up their sporting passion.

“Only when we foster truly inclusive environments does that fear disappear – and the more we create these environments, the greater the standard of sport we will produce in this country for both coaches and swimmers.”