It was a case of job done for Team England’s swimmers during the morning heats session on day three of the Birmingham 2022 Commonwealth Games.

All nine swimmers qualified from their respective races at the Sandwell Aquatics Centre to book a spot in tonight’s finals session.

Team England has three swimmers battling for the medals in the Men’s 200m Butterfly.

It will see the English contingent bidding to prevent Chad le Clos, who was the second quickest qualifier for the final in a time of 1:56.85, from winning gold on the 10 year anniversary of his success at the London 2012 Olympics.

Guy said: “Of course he [le Clos] isa good friend of mine. What he’s done in his career – he is an amazing athlete.

“We are good friends outside of the pool but for that minute and a half we are not really friends.

“I’ll do what I can tonight to do my own swim and see where it gets me.

“Maybe doing a 200 fly in the morning, trying to be quite controlled is quite hard but job done.

“[Now I’ll] get the legs up, recovery skins on, have some good food and just chill out – watch a film or something.”

South Africa’s le Clos believes Guy will be in contention in what he believes will be an epic final tonight.

He said: “Jimmy is going to be really dangerous in lane one.

“It’s going to be a humdinger tonight.”

Solid from Molly and Abbie 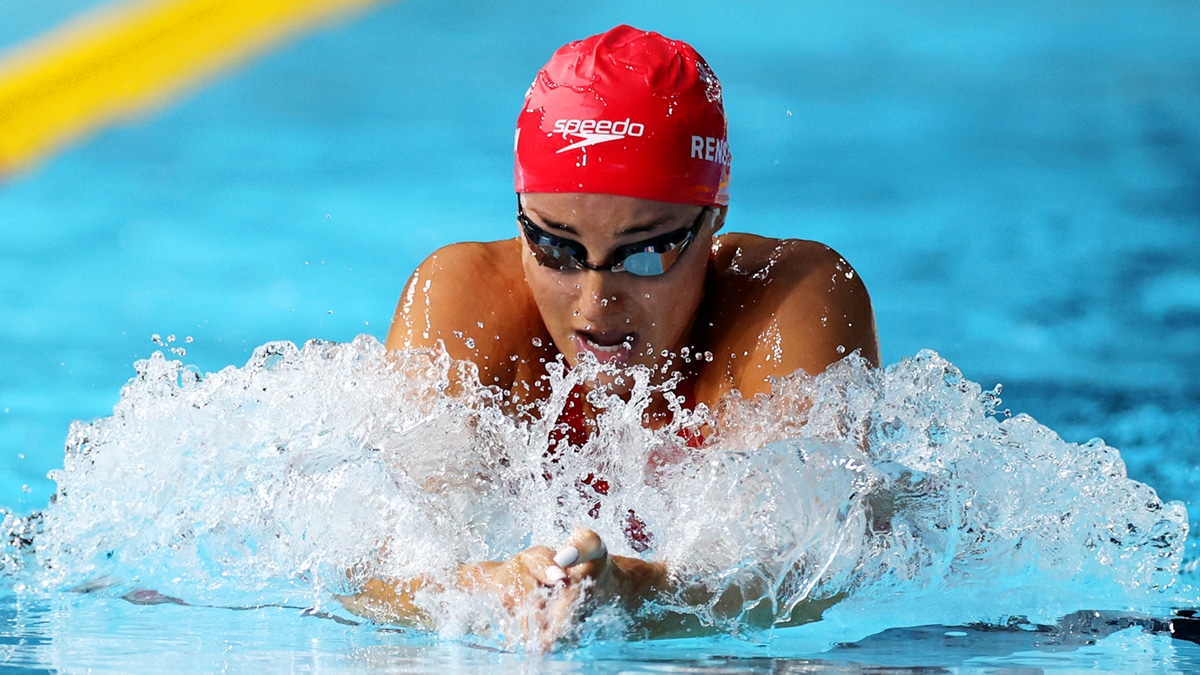 Renshaw won her heat in a time of 2:25.06 to qualify third quickest, while Wood was third in her race and was sixth fastest.

Renshaw looked assured throughout as she touched home 0.02 ahead of South Africa’s Kaylene Corbett.

She said: “This morning was about blowing the cobwebs away.

“It was a solid heat and hopefully I can move it on again tonight.

“[Winning gold] would be the dream but it’s a really tough field out there.

“We’ve got the world record holder in the race, Olympic gold medallists out there, so it’ll be about who can handle the pressure tonight and we’ll see what happens.”

Tom Dean was the second fastest qualifier in the Men’s 100m Freestyle heats.

He led at the halfway stage of his race but was beaten to the touch by Canada’s Joshua Liendo Edwards.

Dean finished in 48.61 with his compatriots Jacob Whittle and Lewis Burras also reaching the semi-finals.

The trio helped steer Team England to a silver medal in the Men’s 4x100m Freestyle Relay on day two and will all have their eyes on sealing a final place.

Whittle finished second in his heat in a time of 49.26 to qualify eighth fastest, while Burras was one place behind him in a time of 49.70 to finish 12th quickest overall out of 69 swimmers.

Whittle said racing his British team-mates who are representing their home nations at the Commonwealth Games is giving him added motivation to do well.

He said: “It definitely [motivates me more], because normally you’re the one that’s kind of wanting them to do well, but here it flips and you’re wanting them to not necessarily do badly, but you want to beat them.

“Because you’ve got such close relationships with them, it spurs you on that little bit more.”

Joe Litchfield booked his spot in the 50m Backstroke semi-finals as he clocked 25.80 to take fifth spot in his heat session.

That ensured he was 15th fastest in the heats and will race in tonight’s contest to reach the final.