It was another impressive morning session for Team England’s swimmers as all 14 members of the team that took part this morning progressed through their heats.

Abbie Wood and Alicia Wilson both made the Women’s 200m Individual Medley final after a strong performance in their heats.

Wood went first in the opening of the two heats setting a 2:13.24 on her way to the final.

She was tied for second in her heat only 0.06 behind Canada’s Mary-Sophie Harvey in a tight battle for the top spot.

That left her as the joint fourth fastest qualifier overall after Canada’s Summer McIntosh and South Africa’s Rebecca Meder went quicker in the second and final heat.

Wilson was a part of that strong second group where she fourth in the heat, doing enough to take the final qualification spot.

James Wilby and Adam Peaty returned to the water following their thrilling 100m Breaststroke final last night to both make the semi-finals in the 50m event.

Peaty was tied fastest overall after the six heats, setting a time of 27.10 as he finished level with South Africa’s Michael Houlie.

It was a strong swim from Peaty who bounced back well from losing his 100m title last night with a professional display in this morning’s session.

Wilby took part in heat four and was second in his heat with a time of 27.74.

The British Performance Centre swimmer continued his fine form after his gold and silver medal already at these games to come through as the eighth fastest qualifier.

On his performance Wilby said: “Today is about doing the job, there is a bigger emotional and adrenaline rush from last night and the 50 is a bit more of a fun event for myself.

I’m just hoping to progress through the rounds to see if I can pull out a nice swim on the final.”

Wilby thanked his team for helping him get prepared for today’s session and admitted that his medal from last night hasn’t sunk in yet.

“It was a late one last night so the team did a fantastic job to help me through.

“It’s only been about 12 hours for them to get me through that process and putting so hopefully I can get through the semis.

“Last night’s sunk in a little bit but not fully yet.

“It was a really special moment and I will try and stay in the Games and try enjoy myself in these races that come now.

“Maybe it will sink in, in a week or so.

“I will finish off the races and then it will be time to sit down and reflect.

“Had a celebratory glass of water and chatted with flatmates, then chilled. We will celebrate as a whole team when we have completed all the races.”

Greg Butler also made into this evenings semi-final after finishing tenth quickest overall.

Butler came through a very fast heat five in fifth place, setting a time of 27.80 just 0.70 off Peaty’s time. 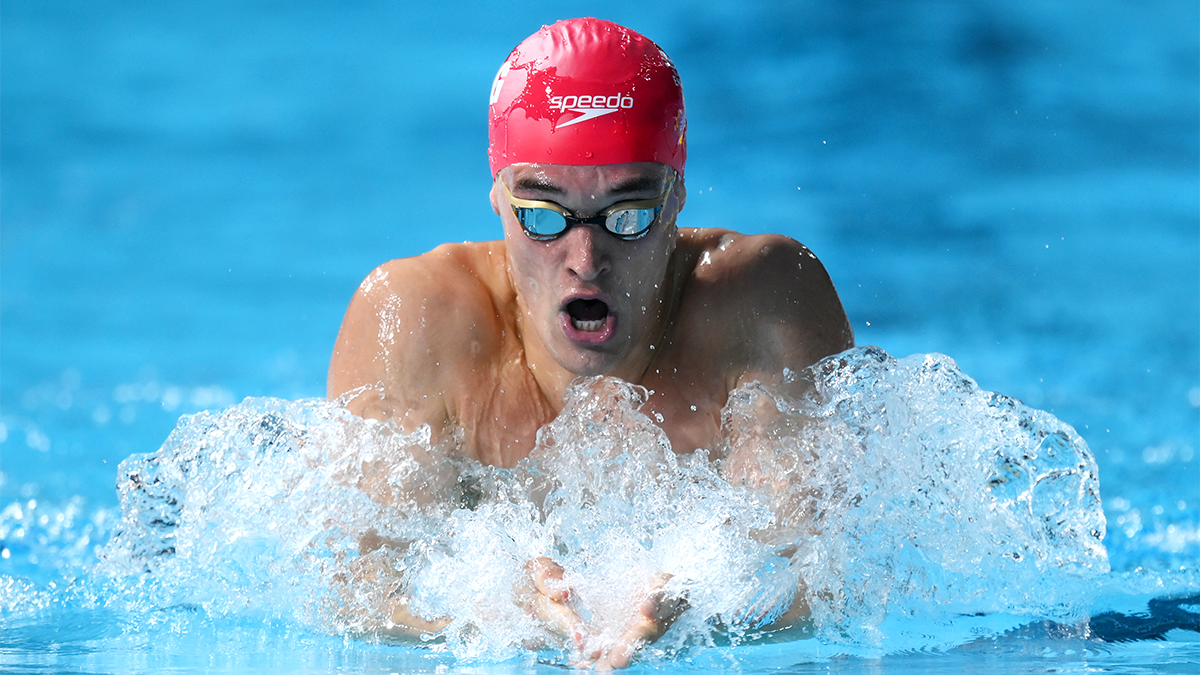 Freya Anderson qualified second fastest for the Women’s 100m Freestyle as she looks to build on her two relay medals.

Anderson battled hard to chase down Australia’s Molly O’Callaghan for top spot in her heat and for the overall fastest time.

The Bath National Centre swimmer finished just 0.55 off the World Champion as she comfortably progressed to this evenings semi-finals.

Anderson swam a strong final 50m’s as she looked to close in on the Australian after being fourth at the halfway stage.

She finished with a total time of 54.83 as the leading duo stormed clear of the rest of the pack.

On her battle with O’Callaghan Anderson said: “I knew she comes back like a rocket, I wanted to be near her at the 50 and sort of dig my way back.”

Anderson has had a packed schedule so far at this year’s games but is now focussed on perusing an individual medal.

“We are over halfway now, so you can kind of see the light and it’s all downhill from here.

“It depends how I do in this 100m; it will decide how the relays are picked.

“They’re [the relays are] better medal chances, than the 400m I have later in the competition.

“I need to find my way of swimming it (the 400m) domestically, then take it to international competitions.”

The English duo both went in heat six with Hopkin finishing fourth just ahead of Hindley in fifth.

Hopkin set a time of 55.50 with Hindley setting a 55.83 as the pair made the semi-finals with the seventh and tenth fastest times respectively.

City of Manchester’s Jamie Ingram set a strong time in the Men’s 100m Butterfly heats to lead an English trio into the semi-finals.

Ingram went alongside his England teammate Jacob Peters in the fifth of the seven heats and set a storming time of a 52.17 to go into the semi-finals as the second fastest swimmer.

He just pipped Peters in a close battle as the Bath swimmer finished just 0.01 off Ingram to go through third fastest.

James Guy completed the English trio going through as he set a 52.49 in heat seven to finish sixth fastest overall.

The double Olympic champion is on the hunt for another individual medal after his stunning bronze in the 200m Butterfly yesterday.

Renshaw finished just 1.14 off South Africa’s Lara Van Niekerk as she set a 1:07.54 to make it into the semi-finals.

Van Niekerk swam in the same heat as Renshaw setting the fastest overall time with a 1:06.40.

The two-time Olympian is back in the pool after narrowly missing out on a medal by just 0.37 in yesterday’s 200m Breaststroke final and is looking to go one better in this event.

Joining Renshaw in this evenings semi-finals will be Imogen Clark and Sarah Vasey.

After her silver medal in the 50m’s, Clark is looking to add to her medal tally with another strong performance in this event.

She finished as the joint ninth fastest qualifier overall setting a time of 1:08.99.

Vasey was just behind Clark in twelfth overall with a time of 1:09.62 as all three English swimmers made it into the semi-finals.