Wilby won silver in the Men’s 200m Breaststroke in the penultimate race of the evening at the Sandwell Aquatics Centre before the team of Lewis Burras, Tom Dean, Anna Hopkin and Freya Anderson doubled the tally minutes later.

Defending champion Wilby looked on course to retain the gold he won at the Gold Coast 2018 Games but couldn’t hold off a late charge from Australia’s Zac Stubblety-Cook.

Wilby had led throughout but world-record holder Stubblety-Cook produced a blistering final 50m swim of 32.31 to touch home first in 2:08.07.

That was 0.52 ahead of Wilby’s 2:08.59 and the Loughborough National Centre swimmer admitted afterwards the crowd had spurred him on.

He said: “I just wanted to get out there and be brave. I really enjoyed it, it was a really good race.

“I was really pushed on by the crowd.

“I was pretty aware of lane three and I could see Zac on the turns. I could tell it was pretty tight and it was a big effort on the last 50. We had a good race.

“It’s been a bit of a rollercoaster. Up against the world record holder, one of the best 200m breaststrokers in the world. I put in a good race and challenged him for that top spot.”

Team England were involved in an epic battle with old rivals Australia in the Mixed 4x100m Freestyle Relay.

The lead switched hands four times between the two nations before a stunning final leg from Australia’s Emma McKeon secured the top spot on the podium.

Burras got England off to a flying start as he clocked 48.28 for the opening 100m before handing over to Dean.

The 200m Freestyle Olympic champion clocked 48.12 but Australia had taken the lead as Hopkin took over.

She had clawed her way to the front at the 250m mark but Mollie O’Callaghan was ahead at the final takeover.

Freya Anderson pushed McKeon all the way but the Australian had enough in the tank to hold off the challenge and seal Australia’s fifth gold medal of the evening.

Dean said: “It’s so great to start with a relay [at] a home Games, to walk into that reception and [win] a silver medal. It’s a great achievement.

“I think the whole energy around this is bigger than any competition we’ve been part of, the biggest thing since London 2012.

“Getting the coverage we want, with eyes on swimming, it can only be a good thing for the sport.”

Burras added: “It’s good to get a Games race under my belt, walking out to a crowd like that is unforgettable.

“I can’t complain – one race, one medal – and to do it alongside my team-mates is really special for me.”

Anderson said: “I was pretty disappointed after the 200m [Freestyle], so to get back into the zone, I knew we could do it.

“It’s not just me I’m swimming for, it’s for my team and England.”

Freya Colbert slashed almost one-and-a-half seconds from her lifetime best in the Women’s 400m Individual Medley final – but was agonisingly outside the medals.

The Nova Centurion swimmer finished in 4:39.80 following a strong final 50m but she couldn’t claw her way past Scotland’s Katie Shanahan, who finished 0.43 ahead to take the bronze.

Canada’s Summer Macintosh set a new Games record of 4:29.01 to take the gold, ahead of Australia’s Kiah Melverton who was second in 4:36.78.

Luke Turley set a new personal best as he finished a creditable fifth in his first Commonwealth Games final.

Turley was given a rapturous reception by the Sandwell crowd as he stepped out into the arena for the first final of the evening.

And he certainly responded, swimming a steady race and finishing strongly.

He was sixth at the halfway stage but had climbed to fifth with 100m to go and held on, clocking his fastest 50m spilt in the last leg of the race.

Freya gives it her all

Anderson gave it her all in the Women’s 200m Freestyle final but was denied a medal following a second Australian clean sweep of the night.

Anderson lowered her qualification time as she touched home in 1:56.83.

However, it was 0.66 seconds adrift of Madison Wilson who secured the final podium place in a time of 1:56.17. 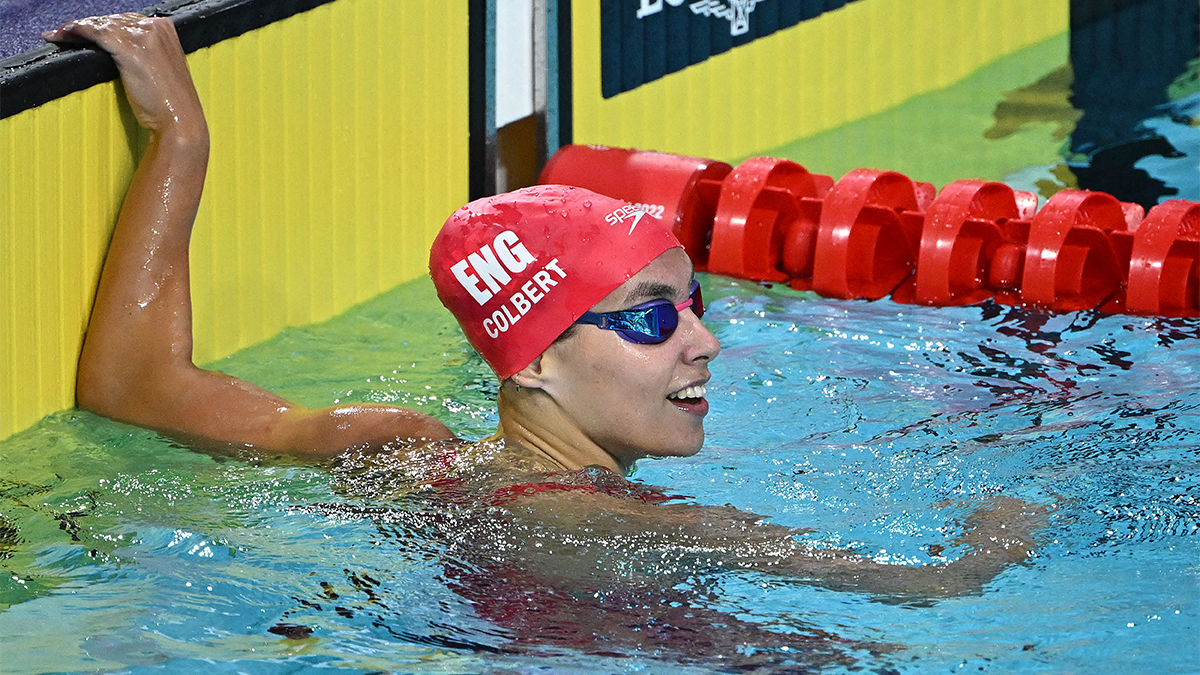 Alice Tai said she was happy with her performance in the Women’s 100m Freestyle S9 final.

Tai was swimming up a classification but improved on her morning’s heat time as she finished sixth in 1:07.10.

She said: “It was nice. There was no pressure as I’ve got my main event on Sunday in the 100m Backstroke.

“Obviously, I need to get back into training properly as I was really hanging on in the final 25 or so.

“But I’m happy and it was really great to swim in front of a crowd so I’m really looking forward to Sunday.”

Both Brodie Williams and Luke Greenbank qualified for the Men’s 100m Backstroke final after finishing second and fifth fastest overall.

All three of England’s representatives in the semi-finals, including James McFadzen, went in the first of the two semi-finals where Williams came out on top.

Williams won the semi-final with a time of 54.00 which was just 0.01 ahead of New Zealand’s Andrew Jeffcoat.

Greenbank was third in the heat and fifth overall with a time of 54.23.

That was 0.32 faster than his time this morning as he joined Williams in tomorrow’s final.

McFadzen impressed despite not making the final.

He came in as the twelfth fastest swimmer overall which was a big improvement on his 14th placed finish this morning.

Imogen Clark kept up her fine form from this morning’s session as she won her semi-final.

The Deventio Swimmer led from the off in her semi-final leaving her rivals in her wake as she won her race by almost a second.

Clark set the second-fastest time overall and was only beaten by South Africa’s Lara van Niekerk, who set a new games record for the event.

On her performance, Clark said: “Yeah, I feel really good and I felt really relaxed tonight and I’m quite looking forward to tomorrow night to get going and to get fighting.

“Consistency has been my word for the last month and I’ve got to get more consistent than that but tomorrow I want to bring that consistency.

“Tomorrow’s another race and another fight and I can’t wait to bring that in the final.”

Clark says it will be a dream to break the 30-second barrier and take home the gold medal.

“On the day it’s anyone’s game

“I have home advantage and to go under 30 would be a dream so I’m just looking forward to getting racing tomorrow.”

Defending champion Sarah Vasey just missed out on a place in the final after finishing tenth overall.

There was a personal best for Holly Hibbott in the Women’s 100m Butterfly semi-finals.

Hibbott improved her personal best time in the heats this morning but broke it once again by finishing with a 58.97 to snatch the final qualification spot for tomorrow’s final.

That smashed her previous best from before the Games which stood at 1:00.14.

It marks an impressive start to the Games for Hibbott, who’s representing Team England for the second time after swimming in the Gold Coast.

Team England’s Ben Proud, Jacob Peters and Adam Barrett all made the 50m Butterfly final after some strong swims from the English trio.

World champion Proud finished with a time of 23.06 to set the fastest time both in his semi-final and overall with Peters just behind with a 23.51.

That time qualified Peters fourth fastest overall leaving Barrett as the final English swimmer to book his place in the final.

That just snuck him into the final as the eighth-fastest swimmer, meaning he will swim in the final tomorrow on his 30th birthday.