Aaron Cook got the better of Freddie Ashley-Sparks in a thrilling finish to the Men’s 17 Years 200m Butterfly final on day four of the Swim England National Summer Meet.

The pair both surged into contention on the last lap and Plymouth Leander’s Ashley-Sparks appeared to edge in front with around 15 metres remaining.

There was even more drama just behind that pair, as RTW Monson’s Ellis Stanhope and Canadian Damian Celsi tied for third in 2:09.97.

Stanhope finished as the outright bronze medallist, with Celsi winning a commemorative medal.

There was also a tense finish to the 13/14 Years final, with Ledbury’s Oliver Jones pipping Hackney’s Marco Roberts to the title.

Jones led from the halfway mark and held off 100m Breaststroke champion Roberts, winning by just 0.13s in 2:18.46.

Luke Burton punched the water jubilantly after looking up at the scoreboard to realise he had won the 16 Years gold.

A four-way battle had emerged at the final turn, with Burton trailing that pack.

But the Wycombe District swimmer left his best until last, winning in 2:08.67.

Barney Howarth-Osborne picked up his third medal of the Summer Meet, winning gold in the 15 Years final.

The Sheffield City swimmer, who had already won a gold and silver at Ponds Forge, never looked like being caught after moving into the lead at the halfway mark.

He was almost two seconds clear in 2:12.69, ahead of City of Hereford’s Joshua Gough and Borough of Stockton’s Jacob Elwell.

Wrekin College’s William Slawson won the 18 Years and Over final for his second medal in as many days. 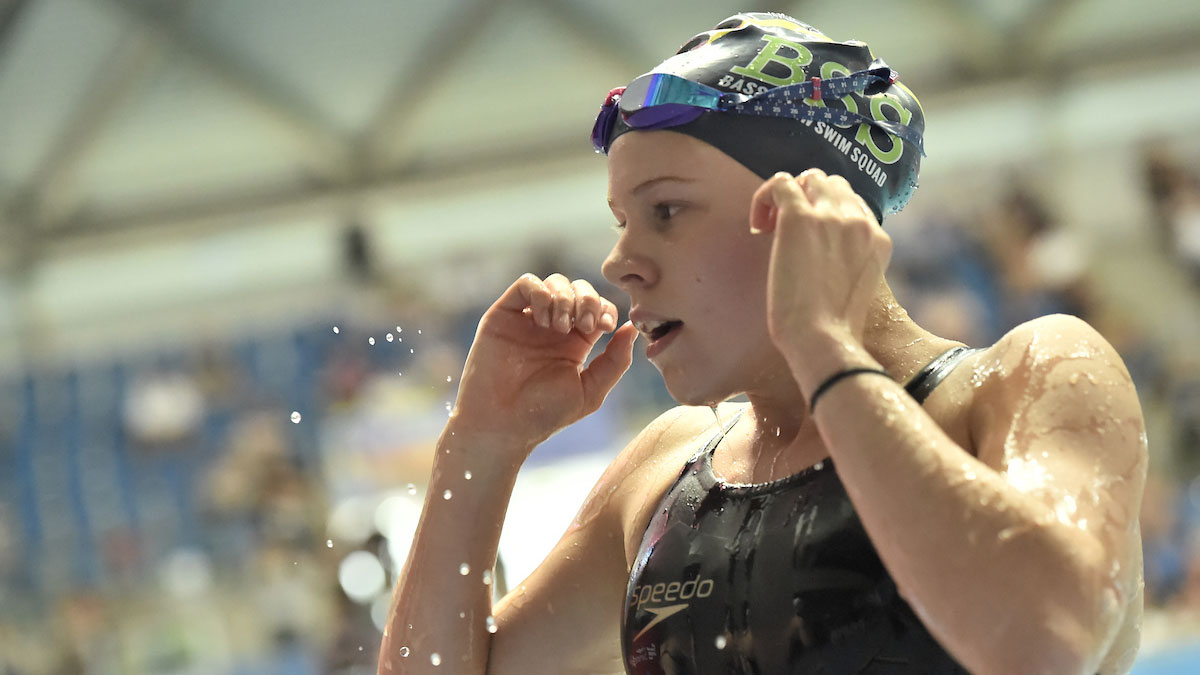 Natasha Utley produced a spectacular finish to win the Women’s 17 Years and Over 200m Butterfly title.

The Bassetlaw swimmer was in third place with just 15 metres remaining, but she split Stockport Metro’s Jessica McDonough and Guildford City’s Tilly Hansen-Hamilton to sneak through for the gold medal.

Utley’s time of 2:19.90 was her second personal best of the day, almost two and a half seconds quicker than her best time before the competition.

The Mount Kelly swimmer went from lane two and was in a tense battle with Stockport Metro’s Amy West approaching the wall.

It took the biggest swim of Fry’s life to hold on for gold as she lowered her PB to an impressive 2:20.47 – six seconds quicker than her previous best just over a month ago.

West, the 200m Freestyle champion and 50m Freestyle bronze medallist, was just 0.19s behind as she added silver to her medal haul.

Annabelle Wilkinson led from start to finish to win the 14 Years national title.

The City of Sheffield swimmer was quick off the blocks and was fastest at every turn on her way to a comfortable win in 2:23.25.

That was Wilkinson’s second gold of the week, after she won the 400m Individual Medley on the opening day.

City of Leeds’ Freya Johnson and Doncaster Dartes’ Madison Johnson both swam below 2:25 for the first time in their careers, winning silver and bronze respectively.

Freeman, who won gold in the 200m Backstroke at last week’s British Summer Championships in Glasgow, was an incredible six seconds quicker than her PB from the start of the day, winning in 2:23.52.

Baillie was agonisingly close to winning her fourth national title of the week, taking silver in an impressive 2:23.90.

Meanwhile, Kimberley Burston cruised to victory in the 16 Years final.

The Oldham Aquatics swimmer led by almost a second at the final turn and still had plenty in the tank to win by 1.3s in a new PB of 2:23.89.