Liam Dawson and Lucas Horton tied for gold in a thrilling race to kick off the finals session on day three of the Swim England National Summer Meet.

The Men’s 13/14 Years 100m Freestyle provided a grandstand opener to the evening session, with Nova Centurion’s Dawson and Wirral Metro’s Horton getting the crowd off their feet as they battled down the last 50m.

The pair touched the wall in 55.79s, with Dawson improving on the personal best he set in the heats by 0.66s.

It also capped a superb day for Horton, who had earlier shaved more than two seconds off his own PB.

Team Bath’s Oliver Watts smashed his PB from the morning to take the bronze medal in 56.22.

Lewis Moore chased down Ayotobi Laguda with just metres to spare to win the 17 Years title.

Ellesmere College’s Laguda led at the halfway mark and looked strong with 25 metres to go.

But he was caught by Team Ipswich’s Moore, who finished impressively to win in 52.73s, 0.14 ahead of Laguda.

Adam Strickland swam under 54 seconds for the first time in his life to win gold in the 15 Years final.

The Derwentside swimmer headed to Ponds Forge with a lifetime best of 55.92 and he took almost a second off that in the heats.

By the end of the day, he was more than two seconds quicker than he’d ever been, clocking 53.90s for the title.

Julian Lin stunned the field from lane one to win the 18 Years and Over final.

The Loughborough University swimmer led at the halfway mark and held firm to win in 51.50s, just 0.01 quicker than the PB he set at the British Summer Championships in 2015.

Derventio’s Ryan Reader pipped Bath University’s Jeffrey Chen to silver, finishing just a hundredth of a second ahead in 51.61.

Reuben Edwards dipped under 53 seconds for the first time ever, winning the 16 Years final in 52.93.

The RTW Monson swimmer had set a PB of 53.90 at last week’s British Summer Championships and showed spectacular progress in a short period of time. 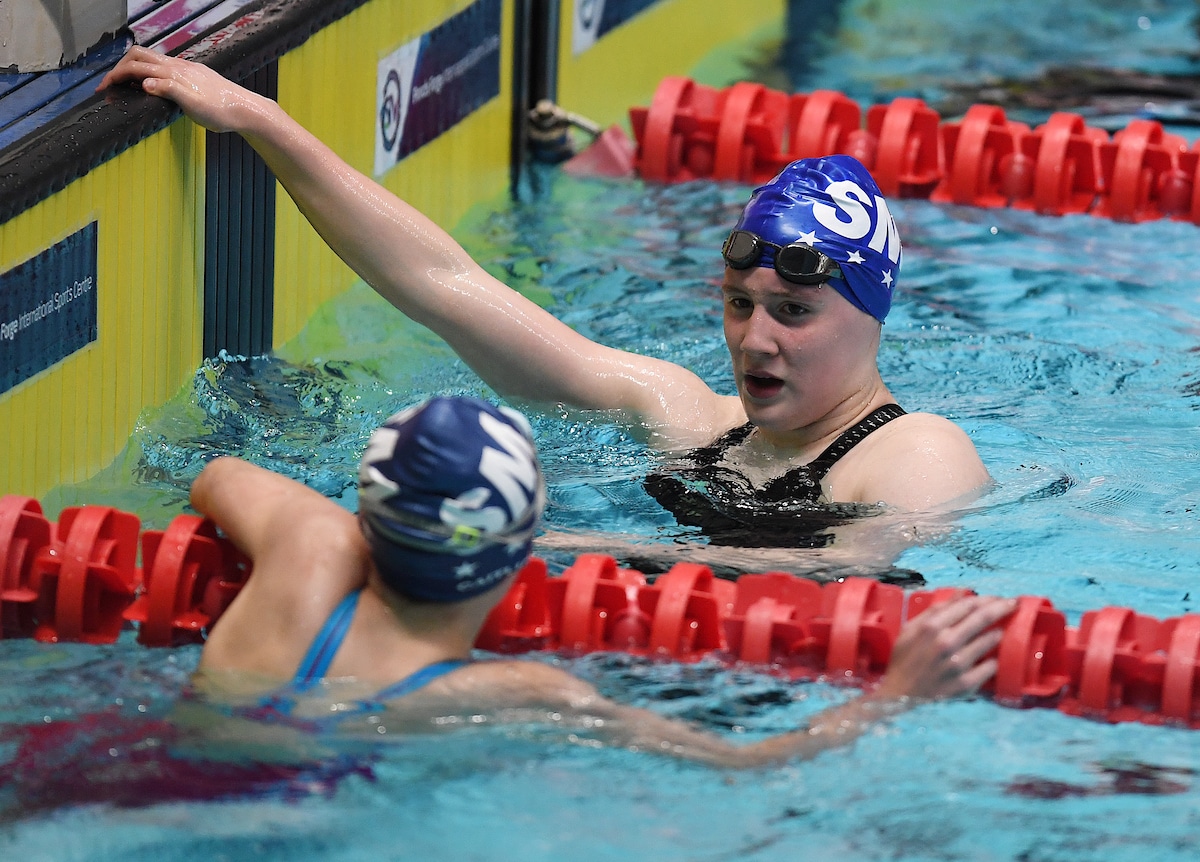 The Stockport Metro swimmer didn’t have the lead at any of the turns, but chased down her teammate Caitlin Lansom in the closing stages.

Roe won 50m Freestyle silver on Thursday and was the 100m Breaststroke champion at the British Summer Championships.

Ellesmere College’s Katie Hale won her second bronze medal in as many days, following her success in the 50m event.

Ashleigh Baillie won her third national title of the week, taking gold in the 12/13 Years final.

The City of Sheffield swimmer held off the late challenge of City of Salford’s Ella Blocksidge.

Baillie had already topped the podium in the 100m Butterfly and 200m Freestyle.

Borough of Kirklees’ Ruby Knight rounded out the podium in a PB of 4:34.19.

The Sutton Cheam swimmer won bronze in the 200m Freestyle at last year’s Summer Meet, but stepped into top spot with a commanding swim.

Proctor won in 4:32.72, with City of Birmingham’s Millie Checkley in second and York City’s Ella Stabler in third.

From lane one, Green seemed to be swimming her own race as she led at the halfway mark.

100m Butterfly champion Jessica Podger was back on top of the podium in the 17 Years and Over age group.

The Millfield swimmer was locked in a tense battle with Beckenham’s silver medallist Tiegan Child at the final turn, but kicked brilliantly to win gold by more than a second in 4:23.62.

RTW Monson’s S6 swimmer had already won gold in the 50m and 100m Freestyle, completing her hat-trick in a tight final.

Sneddon touched the wall in 6:30.98 for 521 points, just 16 ahead of Cockermouth’s Grace Ella Cooper-Holmes.

William Perry improved his personal best time from the heats by more than 10 seconds to be crowned Men’s MC 400m Freestyle national champion.