Reece Dunn broke his own world record to lead a British clean sweep of the Men’s 200m Freestyle S14 on the opening day of the World Para Swimming Championships in London.

Dunn has made an emphatic impact in his incredible debut season, breaking the 100m and 200m Freestyle world records at the World Series event in Berlin in June.

The Plymouth Leander swimmer only qualified fifth fastest for the final, but he was quick out of the blocks in lane two.

Dunn had opened up a sizeable gap at the halfway point and he strode clear for a dominant victory.

He was closely followed by two of his Great Britain teammates in a sweep of the podium for the home nation.

Stockport Metro’s Thomas Hamer won silver in a new personal best of 1:55.19, while City of Norwich swimmer Jordan Catchpole smashed his own PB to win bronze in 1:56.23.

Unbelievable.@BritishSwimming's @alice__tai, who went out in the heats of the same event in Rio, is the new S8 100m freestyle world champion#London2019pic.twitter.com/hXy7T5cCbJ

The Ealing swimmer will compete in seven events at the London Aquatics Centre this week and she made the perfect start on Monday.

Tai was just 0.11 seconds shy of her own world record, winning gold in 1:03.77 for her first ever individual title at the World Championships. 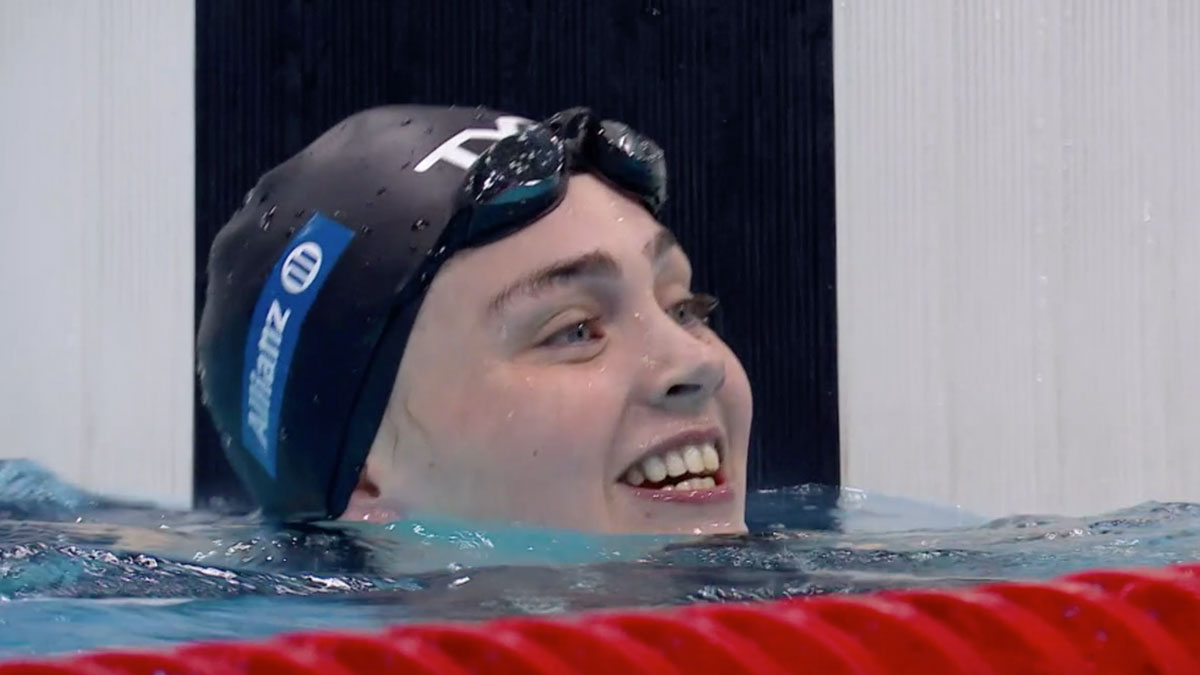 Tully Kearney celebrated ecstatically after edging out her compatriot Suzanna Hext to win gold in the Women’s 50m Freestyle S5.

Kearney – a four-time world champion – had set a new personal best of 36.51 to qualify for the final and she went even quicker when it mattered most.

The City of Manchester Aquatics swimmer lowered her lifetime best to 36.28, setting a new British record to win gold.

Kearney was pushed all the way by World Championships debutant Hext, who won her first international medal.

Hext set a PB in the heats and was just shy of that mark as she claimed silver.

"I don't know why I'm getting so emotional over a bronze medal. You give your life to your sport, you give everything…"

The tears are flowing. In a good way. We challenge you to find a more emotional interview than this from @EllieSimmonds1 😍#London2019pic.twitter.com/3O8EKqef7F

Ukraine’s Yelyzaveta Mereshko and China’s Yuyan Jiang were locked in a battle for gold further up the field, which led to Jiang breaking the world record for victory.

But Simmonds and Maisie Summers-Newton engaged in a similarly thrilling race to complete the podium, with little to separate the pair throughout.

Simmonds won Paralympic gold in this event at London 2012, when a then-10-year-old Summers-Newton was watching on at home.

The pair pushed each other to the roars of the vocal home crowd and it was the two-time Paralympic champion who clinched bronze.

Simmonds touched the wall in 5:21.78 to pick up her 16th World Championships medal.

Following the race, an emotional Simmonds said: “It was a bit slow, I don’t know why, it was a really hard swim but I really enjoyed it. I’ve got so many people here supporting me, it’s just great.

“It does feel like extra pressure, but just to be here, at a World Championships in London, and have all the support, is so nice.

“I’m just enjoying it all. To get a bronze medal, in the pool where, seven years ago, I got two gold medals… I’m so happy.

“You give your life to your sport. With the sacrifices you make, it’s just so good.”

Summers-Newton produced the race of her life to finish in fourth place.

The 17-year-old clocked 5:23.65, improving her personal best by more than three seconds.

A great swim from GB's @zaramullooly as she pushes Aurelie Rivard *all* the way to take World Para Swimming Championships silver in the 50m Freestyle S10 final#London2019pic.twitter.com/rd7XdEIV5j

The Guildford City and Northampton swimmer lowered her own British record to 28.22s in a thrilling race.

Mullooly finished 0.03s to celebrate her maiden final on the world stage.

Northern Irish swimmer Firth is the world record holder in this event and although she was well shy of her best, she did enough for silver in 2:06.18.

Applegate, who won gold at London 2012, was close behind in 2:06.27 to win her eighth World Championship medal.

The 16-year-old, of University of Aberdeen, celebrated her World Championships debut in style, setting a new PB of 1:03.00 to finish third.