Great Britain stepped onto the podium three times on the second day of action at the European Aquatics Championships in Rome.

Freya Anderson earned her second-ever individual European medal, and her first of this competition, with bronze in the Women’s 100m Freestyle final.

The 21-year-old won bronze in the 200m Freestyle at the event in Budapest last year and now doubles her medal tally so far in this year’s championships.

Anderson struck silver as part of the Women’s 4x200m Freestyle Relay team on the opening day and continued her good form on day two.

After being fourth fastest going into the final, she stepped up her performance to make the podium places.

It was a strong finish to the race from Anderson which saw her clock a time of 53.63 – just 0.01 away from securing the silver medal.

After the race, Anderson said: “The race went to plan which is not something that usually happens, but I’m really happy with the bronze.”

On the close finish for silver, she added: “I couldn’t actually see the board so I didn’t know it was that close, but I’m really happy just to get a bronze and get the ball rolling individually, so I’ll take that.” 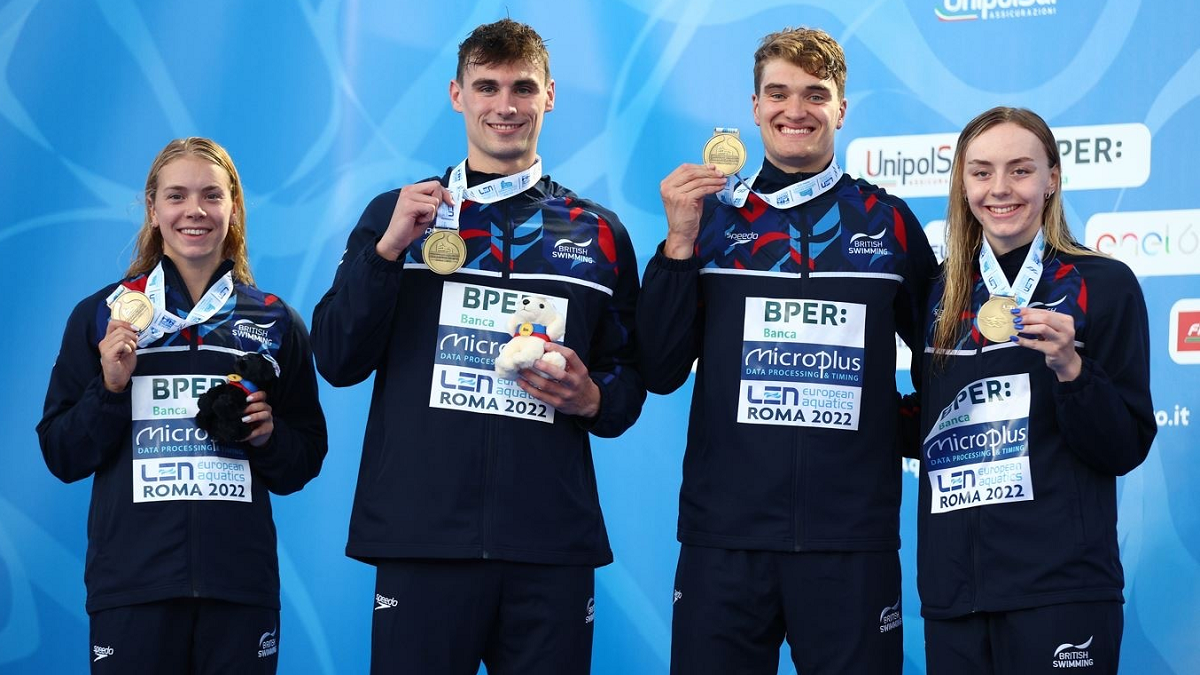 There was more bronze brilliance from Great Britain in the Mixed 4x100m Medley Relay final.

After a few changes to the quartet that were crowned Olympic champions in Tokyo, the fantastic foursome of Medi Harris, James Wilby, Jacob Peters and Anna Hopkin rose to the occasion.

Hopkin, who swam the anchor leg for Team GB at the Olympics, brought it home yet again to earn another medal for Great Britain.

The team finished in a time of 3:44.69 to win bronze. The Netherlands were the gold medallists, with Italy in second.

The first medal of the night for Great Britain came in the opening race as Great Britain’s Katie Shanahan stormed to silver in the Women’s 200m Backstroke final.

Shanahan was in second at the halfway mark and held on to take her place on the podium.

Her time was 2:09.26 – which was quicker than her semi-final swim and just outside her lifetime best.

The 18-year-old was the European Junior silver medallist in the 200m Backstroke last year and just one year on, she has now taken the silver in the senior competition.

James Wilby narrowly missed out on a medal in the Men’s 100m Breaststroke final as he finished fourth.

After taking the last remaining qualifying spot ahead of the final, Wilby swam out in lane eight.

The Commonwealth champion touched the wall just 0.04 behind the bronze medal winner from Lithuania, Andrius Sidlauskas.

He was joint fourth with Austria’s Valentin Bayer while Italian swimmers Nicolo Martinenghi and Federico Poggio impressed in front of a home crowd to take gold and silver respectively.

Wilby said: “I just thought after last night, I luckily made it in, it was just going to be a big, strong, brave effort and that’s what I gave.

“Slightly long on the finish and just four one hundredths outside but, it’s one of those ones where if you don’t quite spot the wall just right you end up being either long or short and it was long on that one.

“But I’m really enjoying it, I’m really happy with the turnaround that I had there.

“Coming into the final last and getting joint fourth in the end – I’ll take it. I’m having a lot of fun still and more races to come.”

Luke Greenbank was the third fastest swimmer of the Men’s 200m Backstroke semi-finals.

Greenbank finished second in the opening semi-final, with Brodie Williams swimming in the second semi-final.

Williams turned in second at the halfway point but dropped down the standings in the final 50m to set a time of 1:59.69 and place 13th overall.

Dean was first up and finished in a time of 48.44 out in lane two. He touched the wall in fifth place.

The second semi-final saw Richards go in lane eight and lower his qualifying time by 0.01 to finish in 49.01.

Kara Hanlon lowered her heats time to set another lifetime best time in the second semi-final of the Women’s 100 Breaststroke.

She finished in fifth place with a time of 1:07.35 which sees her secure the final qualifying spot for the final. Hanlon will swim in lane eight.