John Britton held on to beat Will Bell to the Men’s Open 400m Individual Medley title in a thrilling race at the Swim England National Winter Championships.

Ealing’s Britton took charge on the breaststroke leg, opening up a one-second lead over Mount Kelly’s Robbie Jones heading into the final stroke.

Bell had been almost three seconds adrift at the halfway stage, but he produced a trademark finish with his favoured stroke.

The City of Leicester swimmer quickly reduced the deficit and was half a second behind Britton with 50 metres remaining.

Bell looked to have caught Britton at the last turn, but Britton left just enough in the tank to hold on for victory.

He touched the wall in 4:15.03 for a three-second PB, just 0.11s clear of silver medallist Bell, who won the junior gold medal.

He said: “We’re doing this meet unrested, untapered. It’s like a training meet.

“I was really happy with the swim, it was quite unexpected because I’m not an IM swimmer, so to come out with a good PB like that and potentially a record, I can’t complain.

“I’m not really looking at results as my main goal for this meet, I just want to enjoy myself and enjoy racing.

“It was a really tight finish, I think it was 0.1 between us, it was a fingertip sort of finish. I’ve got to give credit to John for that but it’ll be an even better race next time hopefully.” 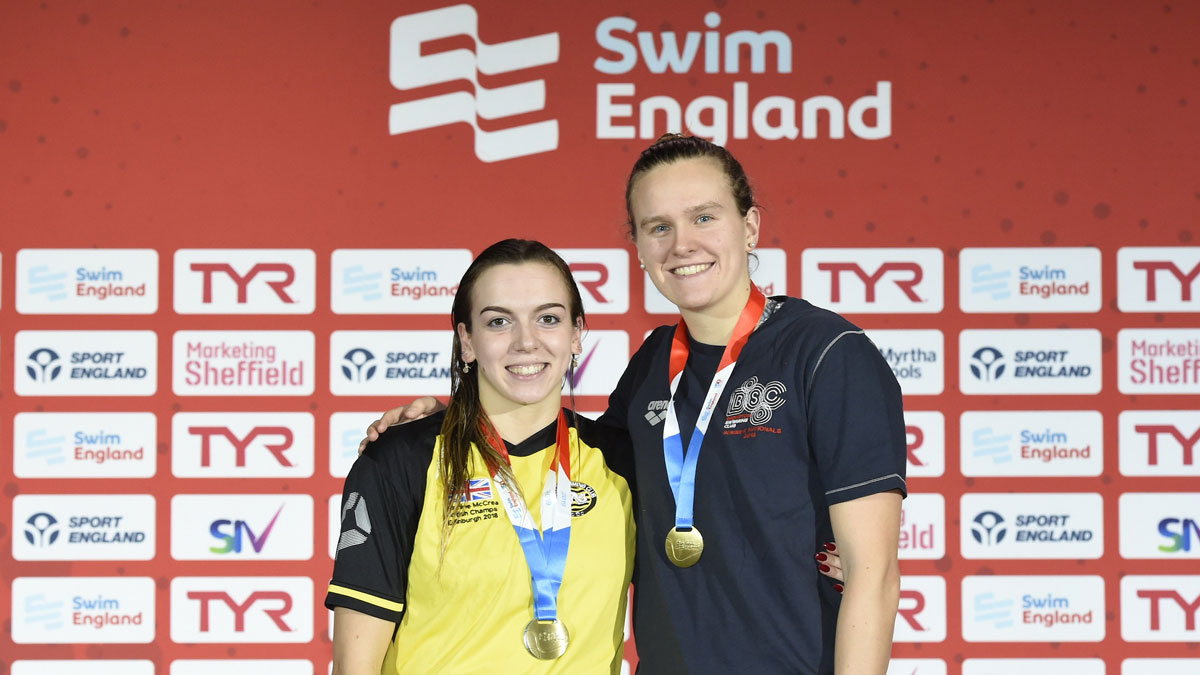 Isabella Hindley won her second gold medal of the Winter Championships, adding the 100m Individual Medley to the 100m Freestyle title she won on the opening day.

The Brompton swimmer was more than two seconds quicker than any of her rivals in the heats, setting a new personal best time of 1:01.56 to qualify fastest.

Hindley had never swum below 1:03 heading into 2019, but her renaissance continued in the final at Ponds Forge.

She led from start to finish and lowered her PB to an impressive 1:00.80, comfortably securing the gold.

Hindley has shaved more than two seconds off her career best time in the event this year.

She said: “I’m happy with that. The 100 IM for me is kind of a fun one because it’s not an Olympic event, so it’s fun just to get in there and race.

“I graduated from Yale a couple of months ago. I was there for three years over in the US and then this year I decided to fully commit to swimming so I’ve now moved to Tennessee, still in America and I’m putting everything into swimming and will see what happens before Olympic trials.

“I think just having that mindset that this is everything to me I think has really changed the way I approach the sport so I think that’s helping a lot with my training.

“The main goal is Olympic level but we’ll see. Trials is only four months away so we’ll see what happens between now and then.

“It’s such a splash and dash that one, I slipped on one of my turns so I wasn’t too happy with that. I’m used to swimming long course metres so short course metres for me is a weird one, I’m not that used to it.”

Millfield’s Anna Morgan rounded out the podium, winning the junior bronze medal after finishing fifth in the open final.