As Adam Peaty prepares to defend his 100m Breaststroke title at the 2019 FINA World Aquatics Championships, his biggest fan will be thousands of miles away, cheering on in the early hours from her living room.

The 2016 Olympic Games may have made Peaty a household name, but as he broke world records and won gold in Rio, he had competition for fame back home.

Mavis Williams had already developed a loyal following on Twitter as she eagerly anticipated her grandson’s first Olympic experience.

By the time the 100m Breaststroke final rolled around, she was joined by a local news reporter at her Sheffield home to watch Peaty claim gold in an unprecedented time of 57.13 seconds.

The following morning, the national rise of #OlympicNan began.

“I got out of bed at 5am, I looked through the window and there was a crowd of television people outside,” Mavis told Swim England.

“I just didn’t know what to do. That day, the whole street was full of reporters, camera crew, television people and everything.

“I did about 15 interviews and in the end, I was exhausted. I was absolutely exhausted. I could feel myself going down, but I enjoyed it. The whole street was with me.

“It was a fabulous time, everyone enjoyed themselves. The funny thing was that the day the dustbin men came, they couldn’t get down the street. They had to come down and get the bins one by one. I thought it was hilarious, I did.

“I’ve loved every minute of it. I’ve never experienced what I’ve experienced since Adam’s been as well-known as he is.

“Everywhere I went down town, or if I went to the shop, cars would shout ‘hello Olympic Nan’. I’d go all embarrassed. It’s nice for him to be recognised.” 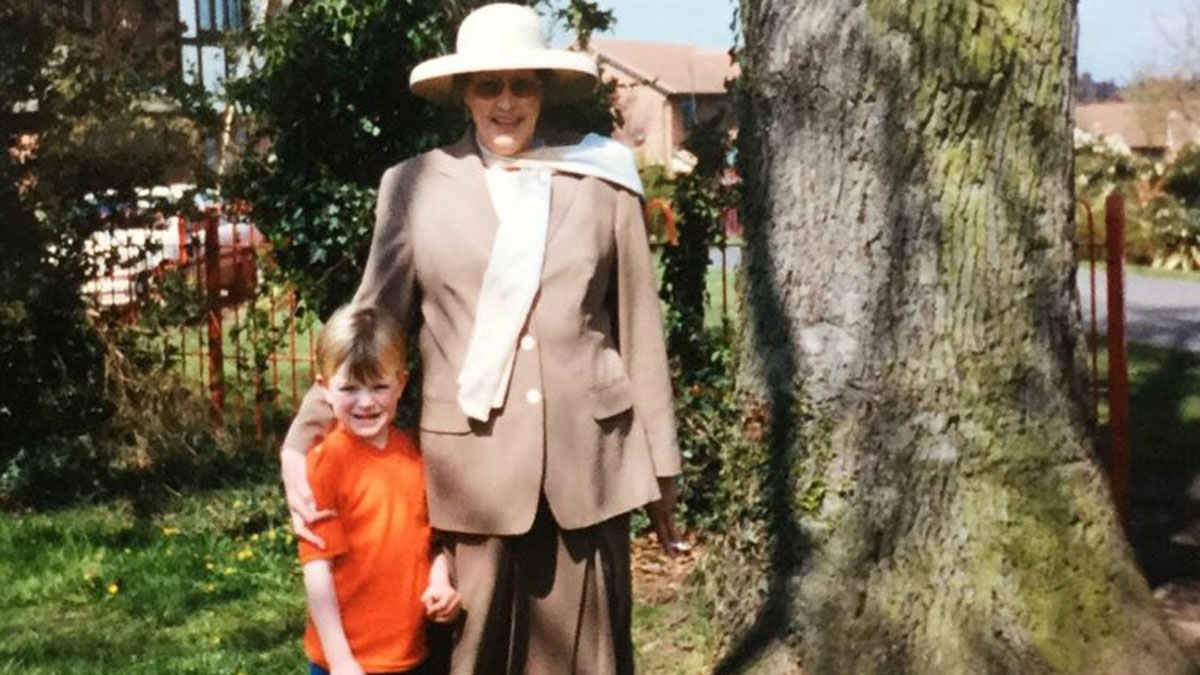 It was the immense pride with which Mavis spoke about Peaty that captured the hearts of the nation.

She didn’t learn to swim until the age of 54 – fittingly breaststroke is her strong suit – but became hooked on swimming after watching a young Peaty flourish at Dove Valley Swimming Club in Uttoxeter.

“The time I first saw him, I’ll never forget, because I went ballistic,” Mavis remembers.

“I had a feeling then that he might go far, but it was when he went to Derby that I knew he would do well.

Since then, Mavis has been part of an incredible journey, whether watching from home, waiting for updates from her daughter Caroline or cheering on from the stands.

The 2017 World Championships in Budapest remains a highlight and Mavis certainly enjoyed watching Peaty win two golds and a silver.

In jovial mood, she had a temporary tattoo – resembling her grandson’s – placed on her arm, capturing the attention of the world’s media. 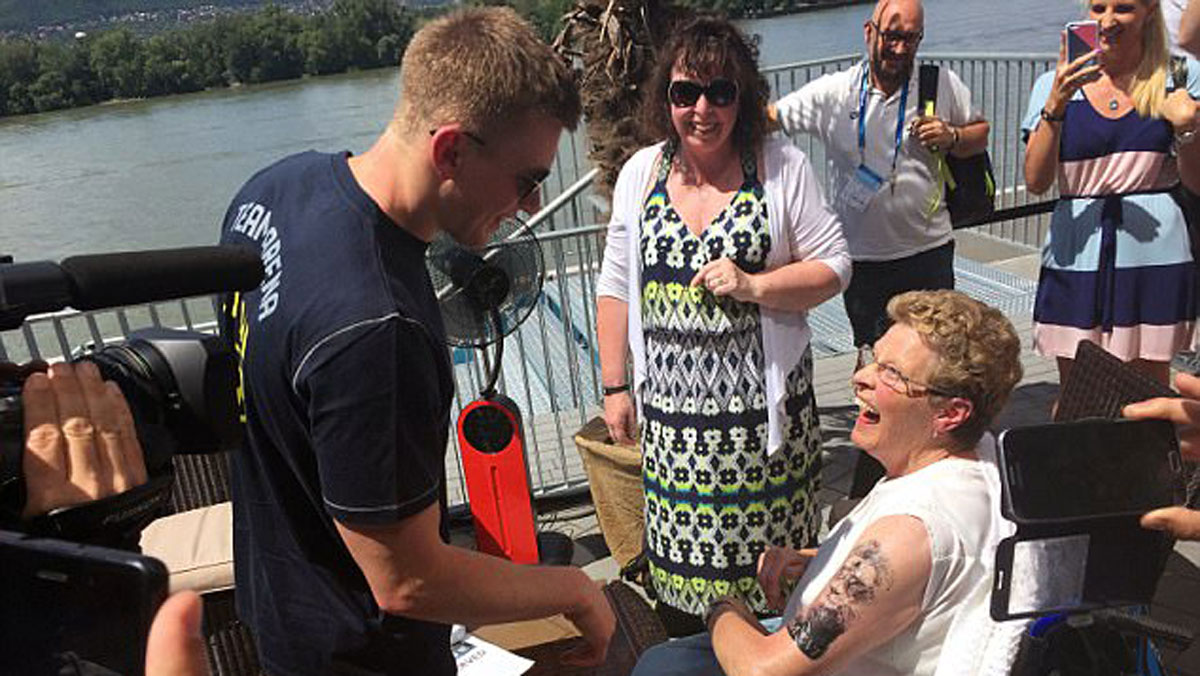 “I’ve met a lot of people and made friends,” Mavis said. “I did enjoy Budapest, the atmosphere was fantastic. I had that lion tattoo. That was hilarious.

“We were having a coffee and I said I’d love a little one on my arm, but I haven’t got the nerve to do it.

“When he first looked at it, he thought I had it done really.”

Mavis has used her profile to help inspire the next generation, including the young neighbour who is currently working towards earning one of Peaty’s gold caps by improving his swimming skills.

There was also the German girl who recognised Mavis in Budapest, having waited hours to try and get a photograph from Peaty.

Mavis went home, asked an obliging Peaty to sign a photograph and sent it abroad to the young girl.

Nerves of a Nan 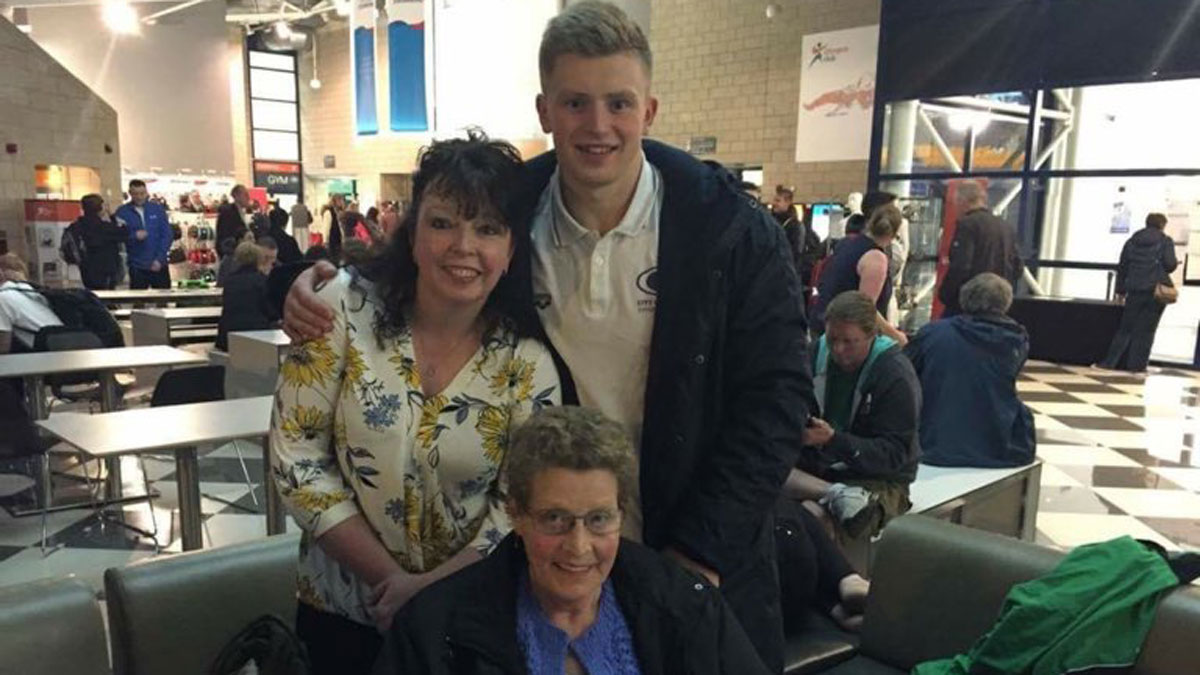 Despite Peaty’s dominance in the pool, supporting him isn’t without stress for Mavis.

“I never watch him dive off that block,” she admitted. “I daren’t. I’ve always done it. I just close my eyes and say a prayer. I say to Caroline ‘tell me when he’s in’.

“I’m not overly religious, but I have got a lot of faith. I’ve done it ever since I’ve been going to these big meets.

“It just gives me a lift when I’m there watching him, although I’m scared for him, because one day somebody will beat him. Hopefully, touch wood, not yet.

“I’ve always believed and always said that there is always somebody behind you that can come up quick.

“I never quote that he’s going to win, I always say I hope he’ll win. I know he’s good, but there is always somebody out there that could beat him.” 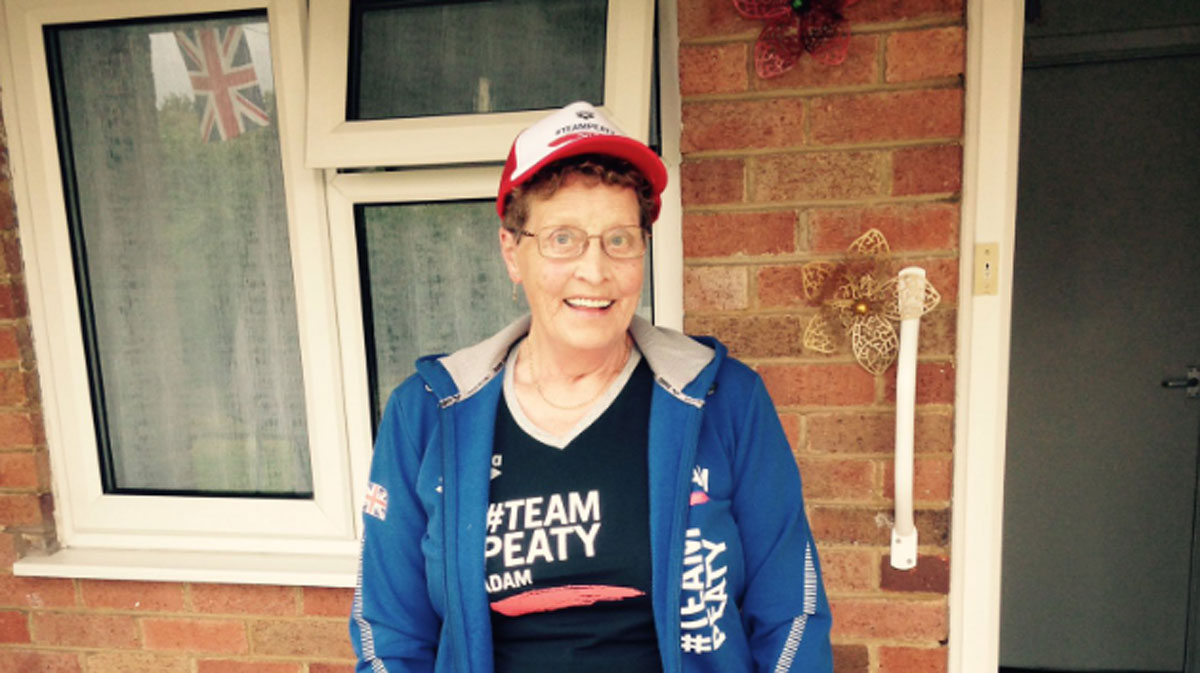 It’s endearing to hear the joy Peaty’s success has given to Mavis.

While she never asked for the attention she now receives, her visibility is a nod to the unwavering supporters behind the scenes of every professional athlete.

Despite being a late comer to the water, swimming has changed Mavis’ life.

“Through his achievements, I haven’t missed out on anything,” she said. “He’s always got me involved as well as his mum and dad, which is nice, because not everybody does that.

“Since he won at the Olympics, it’s been exciting for me and it’s given me a good lease of life, something to aim for and look forward to.

“As you get older, I think it’s better to have something to occupy your mind and keep active as much as you can, rather than to sit around and do nothing.

“He certainly has given me a different kind of life, really.”