Obviously, I get asked about Adam Peaty a lot

He’s definitely the best swimmer I’ve ever seen. And I have seen some incredible swimmers. I was in Beijing when Phelps won his eight golds – phenomenal.

And I watched Becky Adlington win her Olympic golds; the 400m was so exciting, I had a headache for two days afterwards.

And being on camps with her beforehand and seeing her train and appreciating where her body was allowing her to go. Phenomenal.

But for me, Adam is something else. He can absorb an amazing workload, he is obsessed with becoming better and his gold medal winning and world record-breaking swims are just unreal. 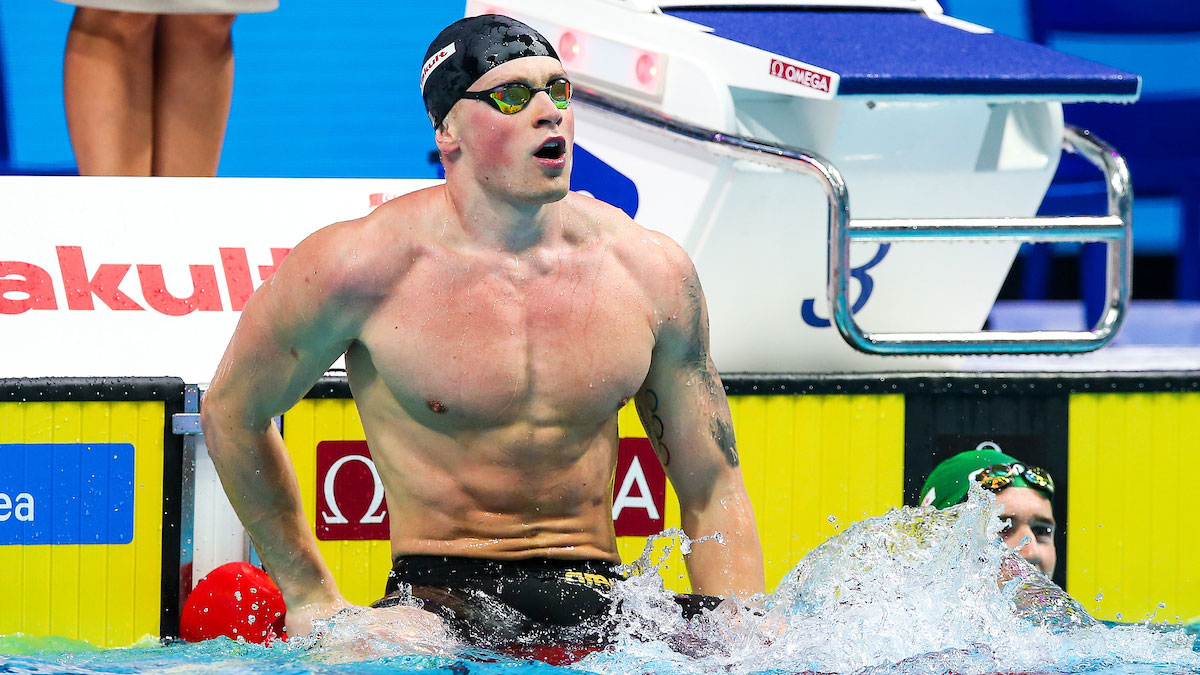 I am so pleased when he does well, perhaps for two reasons: his amazing swims but also because he is such a good role model for the sport and a good human being. That’s really important and pleasing.

My mum always taught me that it’s nice to be important but it’s more important to be nice. And him doing the charity work with me is a real symbol of him giving back and doing things for others, and that makes me proud.

What percentage of his success is down to me?

I would say it’s 50/50 although now he’s older, he doesn’t need me as much but certainly at the start he did.

Even at an early age, he had a very, very natural…shall I say technical presence. When he did breaststroke, he looked big and powerful and very connected; he travelled with quite an easy grace. Some people make it look hard work and others make it look effortless and Adam had that grace.

And from a psychological point of view, he had a competitive edge. If he saw someone on his shoulder, it was like red rag to a bull.

But then when I got involved (he was 15), we developed his own stroke so now everyone’s trying to do the Adam Peaty style. How he does it is when he is at the point of least resistance with the stroke, his feet are just finishing the kick so there’s never really a dead spot with him; it’s like he almost kicks his hands free.

I know you perhaps wouldn’t teach it like that, it would normally be small scoop, glide, but he kicks his hands free and if you watch him when those hands stretch out, he’s almost completely in line, there’s no dead spot at all.

The coach in me saw that something different as a positive. It’s like Michael Johnson when you watch him run, you’d never teach that…but success can come as long as the application of force is in the right place…and with Adam it certainly is.

He also had a lot of fire in his belly. Even at a younger age, he was a lion who wanted to get things done and was very keen to improve.

Even now, we are always refining skills

I do a lot of fins work and paddles work with him. He’ll wear paddles and work on making the stroke as big as it can be, and build technical endurance into that.

That’s from a feel point of view, although a lot of the stuff relating to catch and feel was quite inherent anyway, he’s very talented. We do a lot of sculling in the programme, both with the hands and with the fists, and I do think from a swimmer’s formative years, that being able to scull is one of the most important things.

In my opinion, every session from a young age should include some sculling.

As for my top sculling tips, I quite like the window wiper one, above the head, down by the side, the single arm one, can you not go in a straight line (the synchro one), out the front, one at the front one at the back, do it on a resistance cord…sometimes even out of the water…or try ‘Scull of War’ with one person holding their feet a little and they’re trying to beat the other person, a bit like a ‘Tug of War’.

And Adam is excellent at sculling. In fact, he’s the national centre (Loughborough) scull champion, as well as Olympic and world champion!

It’s been a partnership, a real unique partnership – he calls me John and I call him John! But that’s a tale for another time! Maybe that’s why we’ve had so much success! Though I have to say I am always planning for more.

And the answer is ‘Yes’. But when I look back at my own career, Athens, Beijing Olympics… that is why I’m a good coach. I gave everything but I just didn’t win everything.

I’m still a champion though it took me quite a while to give myself a pat on the back and I became such a fuller person, such a better person through those adverse pit-stops in my life.

Although I am now based in the elite environment, I still love coaching youngsters now and again. 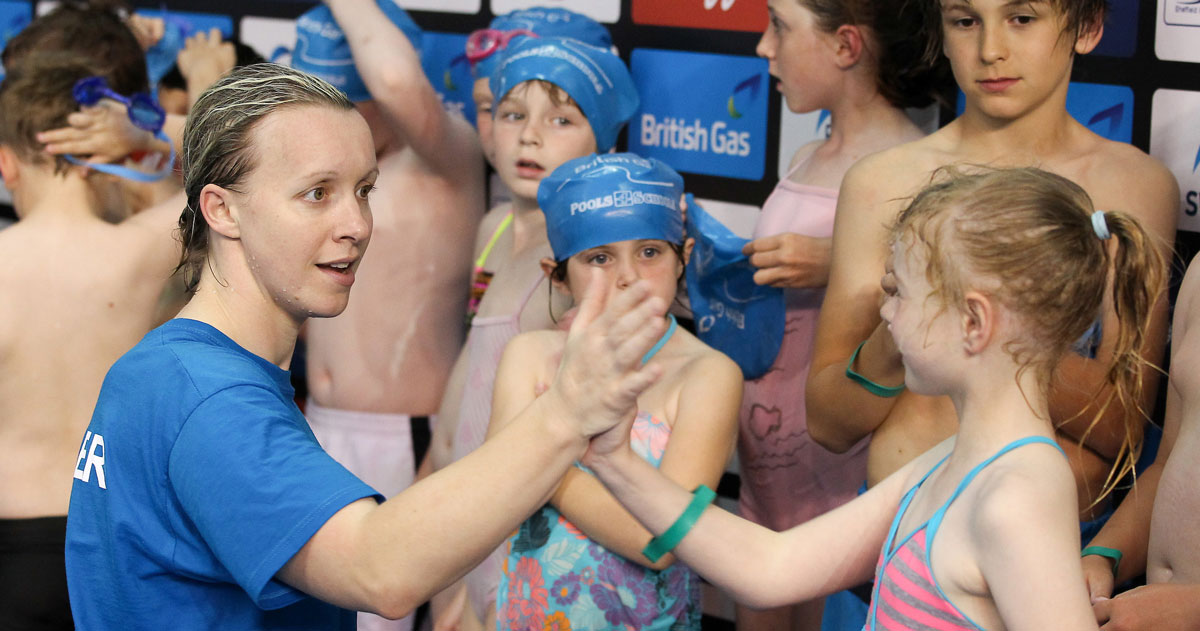 There’s definitely a community coach in me that thinks every kid can go to their own Olympics: it might be masquerading as the county champs, it might be the regionals, it might just be going down to the bottom and getting their goggles off in their pyjamas.

Each has their own qualities and if I’m asked about a structure of skill, what you need at a certain age, I always say: entertainment, fun and tidy.

The bottom line is if they’re untidy swimmers by 13, that’s it. If they’ve had 10,000 hours in the wrong direction, you are significantly inhibiting what they can do long term.

I want them to be pretty swimmers and teachers/coaches can communicate that to them in any number of ways; you may have to be creative to engage the young ones but I’m sure they don’t want to just swim up and down and not think about it, they want to be entertained technically… who is the prettiest at freestyle finger drag? Who has the best entry on fly and what does that look like?

It’s an artistic sport and we have to appreciate that in the youngsters, that artistry of what the stroke looks like, that needs to be prestigiously and passionately applied from an early age.

Even at the national centre, we may get swimmers, even if they are good, who have gone down the wrong path on some technical point and it can take 18 months to unpick that – and they may never get it. It’s so difficult to unlearn and relearn something so the more it can be done correctly at a young age, the better.

It shouldn’t be about distance (even though some parents think it should), it should be technique. Polish the car to begin with; the engine can be tuned later.

Another tip for teachers/coaches is to communicate better to parents: get in early and sell your vision; sell your ‘what, why, when and how’ to them, so they know what you are intending to achieve.

I still remember my teachers and what impact they had on me, and I’m still quite good friends with some of them. You probably don’t realise till you’re 30, but then it hits you what they actually gave you, it’s massive and I still try and say thank you.

I had a teacher called Mr Cooper in my 6th form and he used to make us do loads of lesson plans with different objects and it was so useful to me for dealing with different kids. It made me creative and made me think on my feet.

As for teaching the younger ones, and the fun element, there’s a really good book called ‘Games, Gimmicks and Challenges’ with thousands of ideas; children want to be entertained and that is what we have to do.

I have been greatly influenced by all my various coaches

Coaches need to remember how important they are in the development of young people.

I remember Dave Wilmott and from him, I got energy and enthusiasm and support.

With Tim Westlake, my first coach, I got technical grounding. He spent extra time with me to make sure I got my technique right and I wouldn’t have been as good a swimmer as I was if it wasn’t for him. He also showed me a lot of care and took time with me.

Mark Perry was next and he showed me how to really work hard and then it was Ben Titley at Loughborough at the age of 19 and he showed me creative sessions and how to enjoy my programme doing things differently.

I spent some time with Bill Sweetenham and he showed me what it was to be world class, going above and beyond, being world class every single day.

And then I was with Ian Turner for the last part of my career, though I had been with him for a little bit as an age grouper, and he taught me what it was to be a grown up at home and part-own your programme.

And I’ve had some other really good influences, like Patrick Miley who taught me what it is to be an excellent scientist; Bill Furniss – how to have a level head under pressure; Ian Armiger – how to have effervescent energy all the time; Rhys Gormley – how to be so tough.