He’s swam at two World Championships and is aiming to be part of the Jamaican team heading to the rearranged Tokyo 2020 Olympic Games next year.

Yet Michael Gunning has revealed how he hated swimming when he first started lessons.

During an inspirational speech as keynote speaker at the Swim England Teaching and Education Conference, 26-year-old Gunning told how his swimming teacher had ultimately played a vital role in turning him into an elite athlete by focusing on developing his technique.

He also spoke candidly about the challenges he’s faced after overcoming stereotypical attitudes around his sexuality and race.

Gunning told almost 200 delegates from around the world who had signed into the virtual Swim England Teaching and Education Conference: “I learned to swim when I was four but I hated it at first – I really didn’t like it.

“My mum and dad are not strong swimmers but they wanted to get me to conquer that swimming skill.

“Never did I imagine that I would go on to get national medals, represent my country and go to World Championships.

“Lessons are so, so important. For me, I wanted to enjoy it. My swim teachers wanted to challenge me but I enjoyed that.

“Ultimately you have got enjoy it – that’s why you are doing it. Keep enjoying it and different achievements will come.

“I felt like it was so important to set myself goals. I was a very late developer and I’m very hard on myself as I want to be the best I possibly can.

“I often compare myself to swimmers around me and I remember staying in the different stages longer than everyone else.

“All my friends were moving up and I was like ‘why can’t I move up’? I thought I can’t be that good.

“It’s so important to really go back to the basics and focus on technique and not rush it.

“Some of the most valuable lessons I have had in my career so far have been the technique sessions.

“Technique comes before speed. Everyone wants to be as fast as they can but, ultimately, good technique will do that.

“That starts from the very beginning. When I first had my swimming lessons, it’s that I have got to be so thankful for.

“If I did not take the time to focus on my technique when I was young and the teacher moved me up through the ranks and different stages without me focusing and getting that good technique, I would not be where I am today.

“It’s so, so valuable that people focus in on techniques and going back to basics. There is nothing wrong with going back to the drawing board.

Role model to others 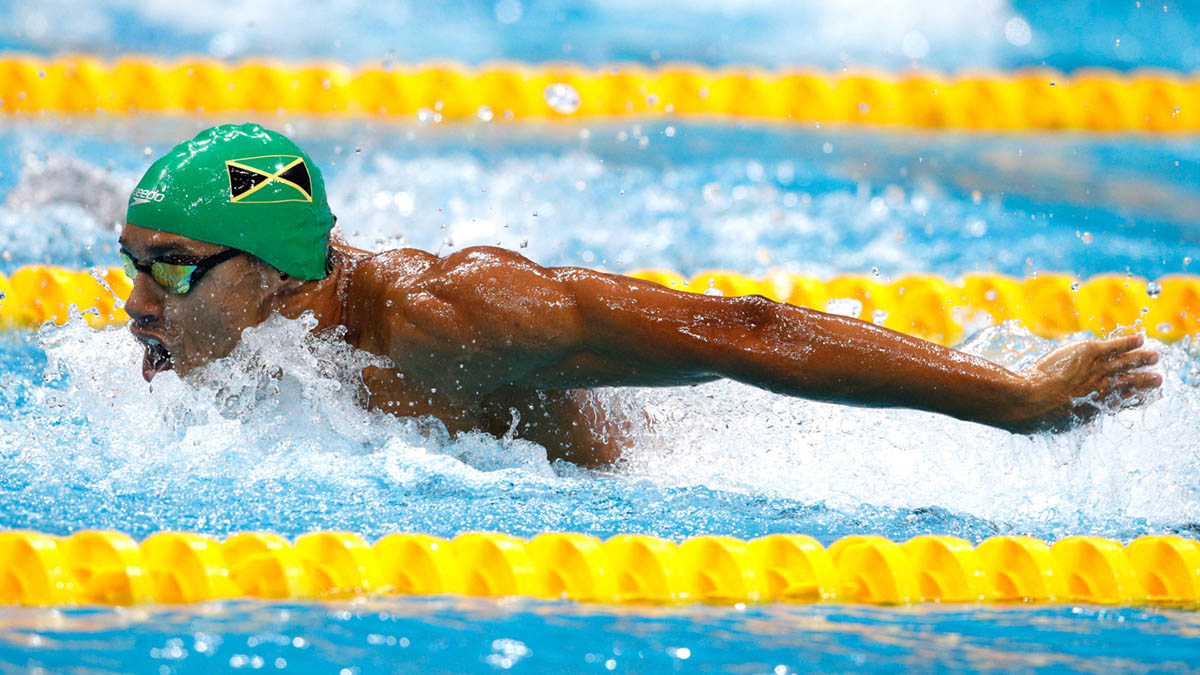 “One of the most important things about swimming from grassroots to the top is that the environment that you are in is so important.

“If it wasn’t for the environments I have had, I would not be as motivated as I am to succeed and achieve my dreams.

“Have confidence to make your environments happy and bubbly and inject that positivity into it.

“People always say to me I’m very happy and smiley and it’s because I genuinely enjoy what I doing every day.”

Gunning said he hopes his journey to the top of his profession will be an inspiration to others and he can become a role model.

“Break those stereotypes and have those hard conversations with people if they are worried or nervous.

“Really remind them what’s important as, ultimately, enjoyment is what gets us through. Don’t make it a chore – make it something you want to do every day.

“I wanted to be like Michael Phelps and Ryan Lochte and all the Americans but there was no black swimmers out there.

“Especially with my sexuality, it was so hard to see myself on television and in the media. Hopefully by me and other athletes sharing their stories it will show people it’s okay, it’s normal and we can be with the best.

“There is that fear that swimmers by coming out and being their authentic self can reduce different opportunities and make you be seen as weak.

“That was one of my fears. I did not want people to think I was not as strong as all the other swimmers and that I was different.

“It’s so important that we keep sharing stories, make it a place where it’s spoken about and it doesn’t matter who you’re in a relationship with.

“Have people talk about it and just really say they are happy with it and they support different campaign and programmes as, ultimately, that’s what will make us realise it is normal.”