He was fourth after the first 50m but had taken the lead after the backstroke leg and never looked back, touching home first in a time of 1:56.38.

McFadzen’s Loughborough team-mate James Brown took the silver medal, finishing just over half a second behind.

Millfield’s Jakob Goodman won the bronze medal after dropping under the two-minute mark for the first time in his career.

He had set a personal best time of 2:00.19 in the heats but the 19-year-old lowered that again in the final finishing in 1:59.05 to claim the final podium place.

Mount Kelly’s Robbie Jones finished fourth in the Open Final but was the fastest youth swimmer in 1:59.40 to take gold.

Loughborough University’s Archie Goodburn was only 0.04 seconds further back to take the youth silver medal, with Mount Kelly’s Ethan Hansen winning the bronze in 2:01.43.

The Loughborough University swimmer was the fastest qualifier by more than five seconds in the morning heats and again led from the front ta take gold and retain the title she won 12 months ago.

Wood’s time of 2:10.42 was 0.27 seconds slower than her heat time but that will of little concern to the 20-year-old after topping the podium.

Her closest challenger was Loughborough team-mate Candice Hall, who touched home in 2:10.92.

Lily Booker was narrowly behind Bell in fourth place but had the consolation of winning the youth gold medal.

The Millfield swimmer finished in 2:11.86 to take the gold ahead of her team-mate, Sophia Wilson who touched home in 2:12.46.

That was 0.17 seconds in front of Leicester Sharks’ Michaella Glenister, who took the youth bronze in 2:12.63. 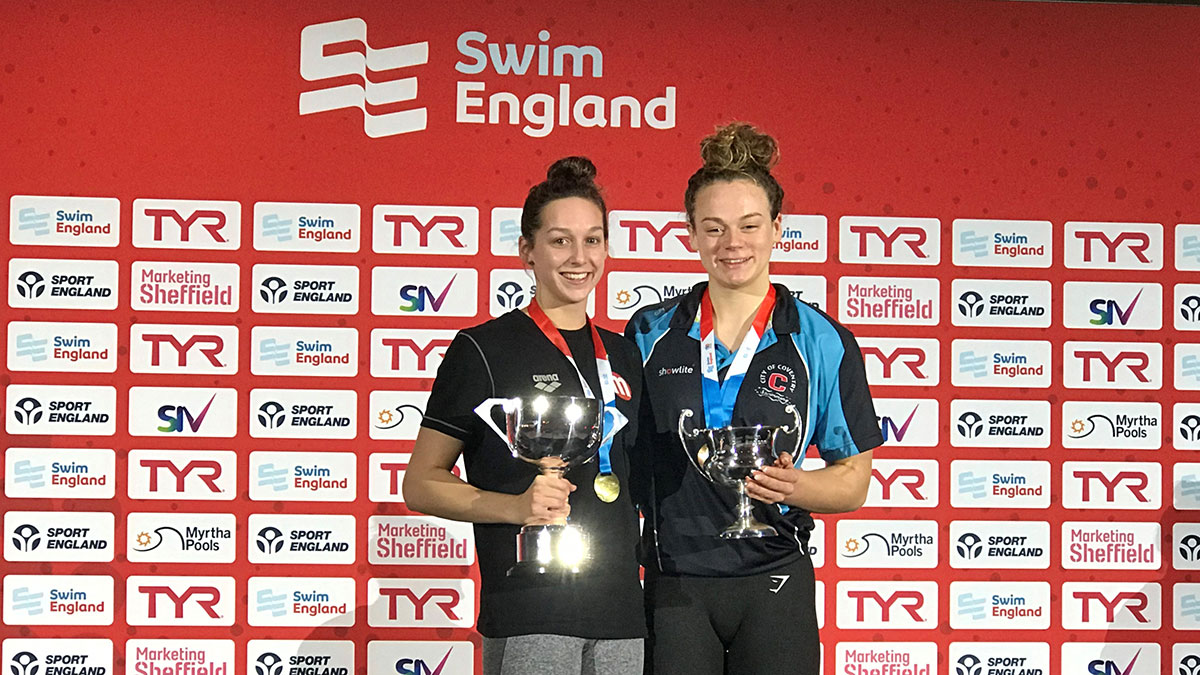 Chloe Golding dopped under the 58 second mark for the 100m Backstroke for the first time in her short course career to claim a national title – 12 months after missing out on gold.

The City of Manchester Aquatics swimmer set a personal best of 58.58 in the 100m Backstroke at the 2018 National Winter Championships, finishing behind Jessica Fullalove who clocked 57.83.

Golding was determined not to miss out on top spot for a second time and touched home first in 57.84, 0.82 seconds ahead of the fastest heats qualifier, Brompton’s Isabella Hindley.

She said: “I came second last year so it’s nice to get a win and I got a PB as well so I’m really happy with that.

“Overall it was good. The things that I’ve been focusing on in training I managed to carry out so I’m pleased that I managed to transfer it into a race situation.

“We’ve been doing lots of aerobic work, lots of hard work so it’s nice to get some proper speedy stuff done.

“All the hard work has definitely paid off. I’ve got the 200m on Sunday so we’ll see then and hopefully win some more medals too.”

Twenty-three-year-old Hindley set a personal best of 58.92 in the qualifiers but broke that to take the silver medal in 58.66

City of Coventry’s Lauren Cox was third – and youth gold medallist – in a personal best time of 58.84.