Adam Peaty is a double champion at the British Swimming Championships after striking gold in the Men’s 50m Breaststroke event.

The Loughborough NC swimmer won the 100m Breaststroke race in session two of the championships, clocking the fastest time in the world this year for that event.

However, Peaty was slightly disappointed with his time in the 50m event as he clocked 26.49.

He said: “It’s almost the same time as this morning – little bit disappointed in that. I wanted to move it on but the harder you try sometimes, you end up with worse results.”

Nevertheless, it was still an impressive performance from the 24-year-old who looked certain to take the win from the 20m mark onwards.

The second and third places were taken by two Scottish swimmers, with Ross Murdoch winning silver in 27.45 and Craig Benson touching home in 27.74 to finish in the bronze medal position.

“Sport can be a very powerful thing, it can inspire millions of people if you allow it.”

“But at the same time you’re only human, don’t take it too seriously and enjoy it,” Peaty added.

“I’ve always got an ethos that the bigger the crowd, the better I swim and it really does show. All my best performances have been in the big crowd arenas.

“That’s just who I am. I like to almost showboat it – I love to race in front of loads of people.”

In the men’s 100m Backstroke, Luke Greenbank set a new personal best in the process of taking the British title.

Greenbank beat his personal best from last year’s Commonwealth Games twice in the same day. His gold medal winning swim was 53.92, which beat his 54.15 heat time earlier in the day.

Joe Litchfield finished second in a time of 54.71 followed by 18-year-old Nicholas Pyle, who achieved a record time for his age group, clocking 54.82.

Despite claiming the women’s 100m Backstroke British title, Georgia Davies was far from happy with her time of 1.00.31.

“I set the bar so high for myself and that time just isn’t anywhere near what I was aiming for. I obviously really want to qualify for the World Championships and I’m definitely not within the consideration time there so I’m absolutely devastated.

“I was actually shocked at the time when I saw the scoreboard. I was gobsmacked and not in a good way. I don’t know what I did wrong and I’m going to have to watch it back and try to work that out.”

Jessica Fullalove took silver in 1.00.84 and Kathleen Dawson finished in 1.01.12 to earn the bronze medal. 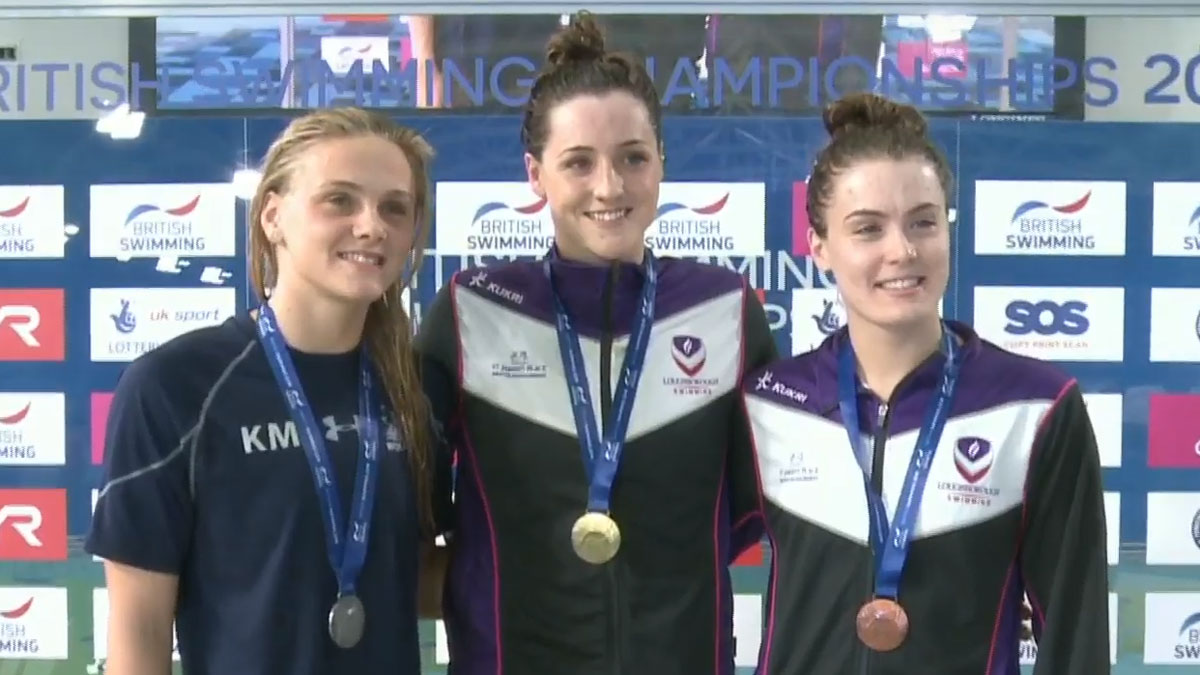 Molly Renshaw earned gold and recorded a consideration time of 2:23:42 in the women’s 200m Breaststroke ahead of the upcoming World Championships.

After winning the British title, she said: “I couldn’t have asked for much more really, my training has been going so well.

“I just wanted to come here and post a good time and try to get on the team, so I’ll have to wait and see.”

But Peters was almost two seconds away from his personal best (1:57:16), which he achieved at the Swim England Winter Championships in 2017, finishing with a time of 1.59.14.

Guy said: “The last 10 metres I felt like a drowning hippo – it was very, very hard. Jacob and Duncan were good competitors in that race but nice to get the win.”

Charlotte Atkinson swam a personal best of 26.80 to be crowned British champion in a close women’s 50m Butterfly race.

Only 0.06 seconds separated the top three and Atkinson said: “I’m really happy with that 50 because I’ve not done that time since I won it in 2017 so I’m really pleased.

“It was unexpected because I’ve approached this season a bit differently.”

There was only 0.04 seconds between Atkinson and Harriet Jones (26.84), who took silver.

Sophie Yendell was another 0.02 seconds behind, clocking a time of 26.86 as she won the bronze medal.