Ben Proud booked his place on the plane to South Korea as he set the fastest men’s 50m Freestyle time in the world this year at the British Swimming Championships.

The Plymouth Leander swimmer was comfortably under the qualification standard for the World Championships as he took the title in 21.50 to beat the previous fastest time in the world this year of 21.53 that Italy’s Andrea Vergani set on 2 April.

Proud has the chance to win a second British title on the final day of the championships, at the Tollcross International Sports Centre, in Glasgow, when he takes part in the 50m Butterfly.

He said: “After this morning, I was feeling quite good and was quite looking forward to coming into tonight and giving it another good go.

“The 50m Butterfly was my passion but I have shifted my focus to do the freestyle and as time has gone on, I have learned to love it.” 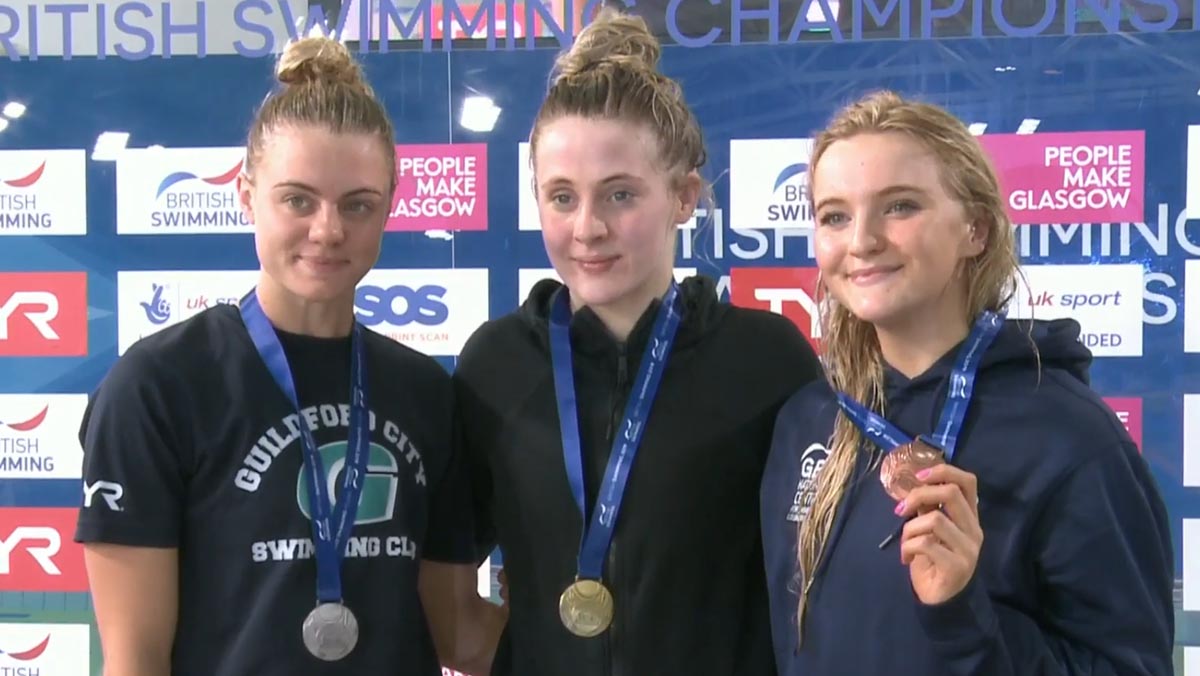 Siobhan-Marie O’Connor was under the secondary consideration time for the World Championships as she claimed gold in the women’s 200m Individual Medley.

Loughborough’s Abbie Wood was the bronze medallist in 2:11.65.

While O’Connor was a comfortable victor, she was slightly disappointed with her performance.

She said: “I’m pretty happy to be British champion and really proud.

“But to be honest, I wanted a bit more from myself and that swim. Unfortunately, it was not meant to be.

“I’ve come through a tough few months to to come here and to be British champion, I’m happy with that.”

Duncan Scott was 0.01 seconds outside the British record as he set the fastest men’s 200m Individual Medley time in the world this year.

In a world-class field, Scott was outstanding as he finished in 1:56.65 – an impressive 2.24 seconds clear of second-placed Thomas Dean (1:58.89), which was a new British age group record.

University of Stirling’s Scott said: “That was a big best time but I knew it was in the locker for a while and it was good to get that out of the way.”

Holly Hibbott was crowned British champion in the women’s 400m Freestyle but admitted she was gutted after failing to go under the consideration time for the World Championships.

The Stockport Metro swimmer took the gold medal in a time of 4:08.50 to win the race by more than four seconds.

But she was outside the World Championships qualification time of 4:06.39.

“I wanted to get close to my best time and under the consideration time for the World Championships so I’m pretty gutted.

“It’s very difficult  when you’re on your own. I like to race and to swim on my own is always going to be difficult but I knew I had to do that.

“I can not use it as an excuse. I was three seconds off my personal best time. I know it’s there as I trained hard enough for a best time but I did not get it.”

Samuel Budd claimed a debut British title as he clocked a new personal best in the men’s 800m Freestyle.

He broke the eight-minute barrier for the first time in his career as he touched home in 7:59.72 to take the gold medal.

The City of Sheffield swimmer said: “ It’s a pretty big marker for me. I would have liked to have been a little bit quicker but at the end of the day I can’t be upset with my first gold medal at the British Championships.

City of Leicester’s William Bell qualified for the junior European and World Championships as he took the silver medal in a time of 8:01.20.

That saw him knock almost nine seconds off his personal best time.

Georgia Davies claimed her second British title of the championships with victory in the women’s 50m Backstroke.

After claiming the 100m crown earlier in the week, the 29-year-old Loughborough NC swimmer topped the podium in a time of 28.10.

But she was pushed all the way by City of Coventry’s Lauren Cox who recorded a new PB of 28.20 to take the silver medal ahead of University of Stirling’s Cassie Wild (28.43).

Davies said: “I’m happy to have won that race.

“It was really, really close. The field was strong which is testament to how British swimming is doing. It’s good these young girls are keeping me on my toes. I’m a veteran now so it’s nice.

“I’m not pleased with that time but I’m pleased to get that gold.”