The Bassetlaw swimmer, in the SM14 category, was in control from start to end and finished in a personal best time of 2:19.68 for a mammoth total of 787 points.

His nearest rival was Blackpool’s Ryan Potter, also an SM14 swimmer, who took silver with 596 points.

The City of Sheffield swimmer snuck inside her PB in the heats and took another four seconds off that mark, claiming 605 points with a time of 2:43.57.

That takes her to within 24 seconds of the British SM14 record and the 14-year-old looks on track for further success.

Borough of Kirklees’ SM9 swimmer Aliya Bacakoglu won the silver medal with 523 points, while Northampton’s SM11 swimmer Eliza Humphrey comfortably secured the bronze, picking up 515 points for her time of 3:28.18. 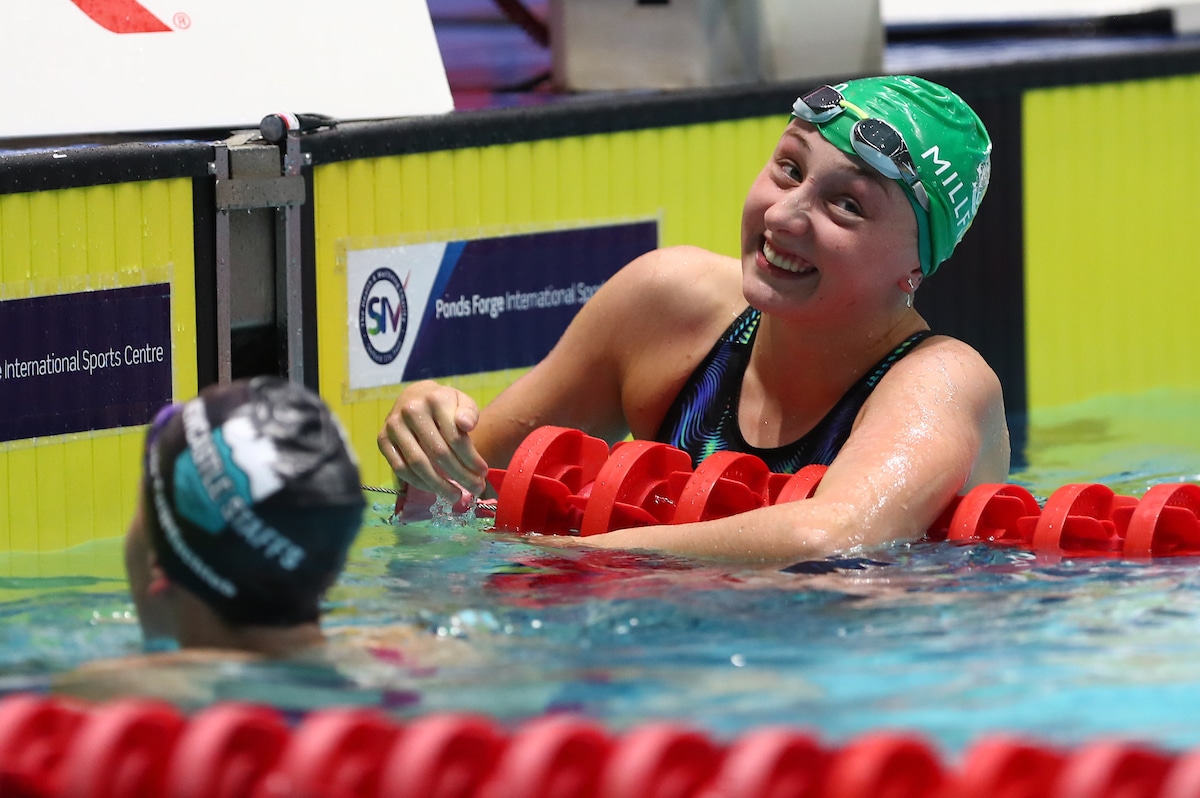 It was Canadian Freya Rothery who touched the wall first in 1:03.84, but the battle was on to be the top English swimmer.

At the start of the day, Robertson’s personal best was more than two seconds slower than her winning time.

Chloe Harris produced one of the most impressive swims of the night, winning the 14 Years title in 1:03.94.

The Royal Wolverhampton School swimmer had set her personal best of 1:05.10 at last year’s Summer Meet and she made a huge statement to set the evening session alight.

Harris was the only swimmer outside of the 17 Years and Over race to go below 1:04.

In a rapid final, Nova Centurion’s Kate Morris stopped the clock at 1:05 to take silver, while Exeter City’s Josephine Klein picked up bronze.

Jessica Podger set her first personal best time of 2019 to win gold in the 17 Years final.

Meanwhile, Jessica Woodward won a tight 16 Years final, with the top seven swimmers all within 0.70s of each other.

Hatfield’s Woodward won gold with a time of 1:04.38, with Woking’s Abigail Stemp in second and Borough of Kirkless’ Chloe Hirst close behind in third.

Wells was second at the final turn, but chased down eventual bronze medallist Neil Wylie, of City of Manchester.

A nailbiting finish left Wells and Harrison fighting for top honours, with the Loughborough swimmer narrowly coming out on top.

Herbie Kinder was in a league of his own as he cruised to victory in the 17 Years final.

The City of Peterborough swimmer had set a personal best time of just over 1:56 at last week’s British Summer Championships and went 1:55 for the first time ever in the heats at Ponds Forge.

His remarkable fortnight continued as he claimed gold in 1:54.71, more than a second ahead of City of Leicester’s Thomas Beamer, who finished in 1:55.99.

The top four swimmers were all inside 1:59, with Team Ipswich’s Joe Cooper edging out Guildford City’s Rory Quirk to silver.

Stockport Metro’s Lewis Cottam stormed home to win the 13/14 Years title, just 0.05s away from dipping under the two-minute mark.

Meanwhile, William Cooper added the 16 Years 200m Freestyle title to the 50m Freestyle crown he won on the opening day.

City of Birmingham swimmer Cooper led at every turn to win in 1:56.03, with Derwentside’s Lewis Maxwell second and Dulwich Dolphins’ Theodore Thompson third. 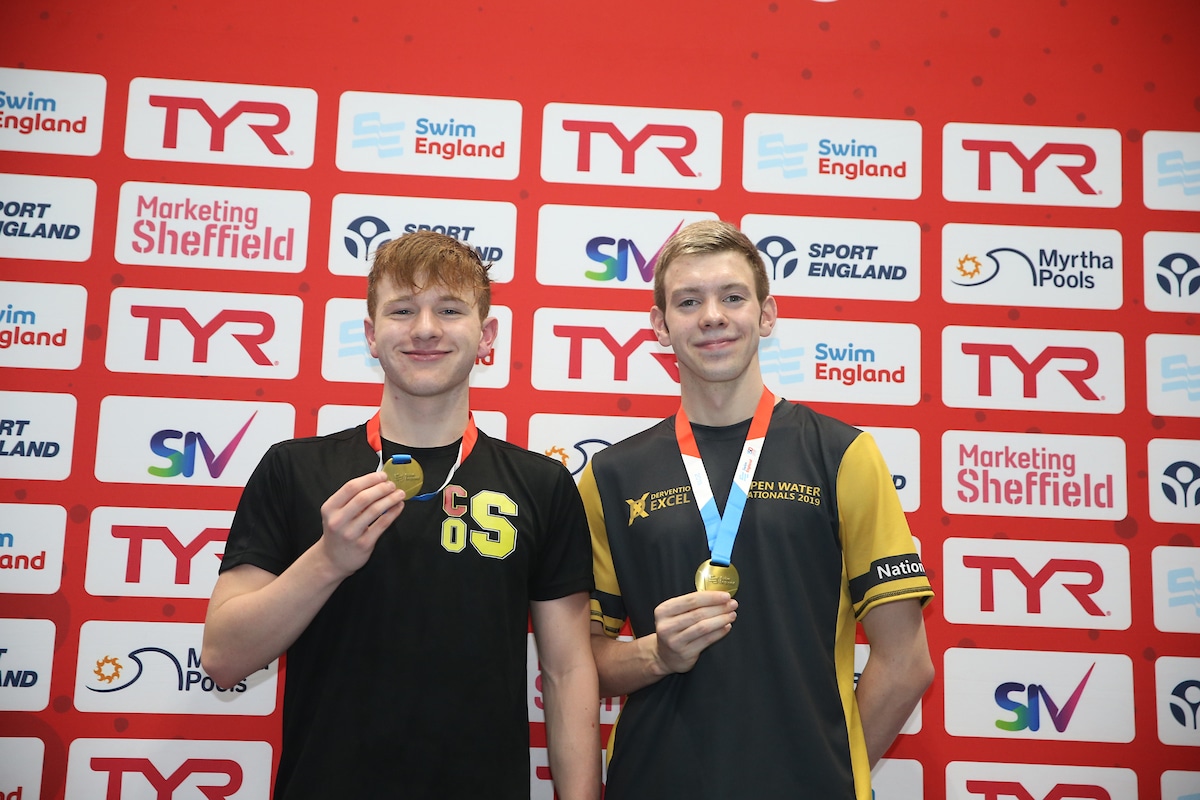 Guest swimmer Lucas Peters edged out Samuel Rose by just half a second to win a thrilling Men’s 16 Years 1500m race, with both taking home gold.

There was very little to separate Dutch swimmer Peters and West Norfolk’s Rose on the last of the 30 laps and it was Peters who touched the wall first in 16:43.05 to win a commemorative gold medal.

Roared on by an excited crowd, Rose was close behind as the fastest English swimmer in 16:43.55, while Leicester Sharks’ Luke Jeal took silver and Northampton’s Patrick Mahney won bronze.

Ewan Wilson was utterly dominant as he won the Men’s 17 Years title.

Wilson’s time would have been enough to take gold in the 18 Years and Over age group, which was won by Derventio’s Ryan Huddart.

Huddart was also a convincing winner, streaking away to win by more than 10 seconds, with a final time of 16:22.56.

Holyer won in 17:07.04, with Chelsea and Westminster’s Edward Whittles winning silver and Wycombe District’s Alexander Cooper rounding out the podium.

Meanwhile, Donatas Dragasius had a strong last 100m to win the 15 Years title.

The Camden Swiss Cottage was close to breaking the 17-minute barrier, beating Doncaster Dartes’ Ben Wright by just over a second.

Athletes named in England Swimming Team ahead of 2022 Commonwealth Games

New ‘exciting identity’ for Performance Squad ahead of Birmingham 2022