The penultimate day of the Speedo National Summer Meet saw a number of personal bests lowered as a mixture of some new and some familiar faces stepped onto the podium.

Day four in Sheffield a total of 35 races in the finals session, with five heat declared winner events earlier in the day.

The medallists for the multi-classification races were all decided in the heat declared winners events, along with the Men’s 1500m event.

The top three finishers in the Women’s 12/13 Years 200m Butterfly final all set new personal best times, but it was Abbie Roscoe who was the fastest by some way.

Matilda Ashcroft of City of Leeds was the only swimmer to go under 2:30 in the 14 Years final.

She clocked a time of 2:27.30 to finish ahead of Swindon Dolphins swimmer Megan Watts. Grace Burton of Doncaster Darts took bronze.

O’Halleron-Hutchinson was in control in the 15 Years final. The Northumberland and Durham athlete led at halfway and couldn’t be caught.

What an evening session! Unreal swimming by team Dside and NDPP

Her wonderful gold medal-winning swim saw her stop the clock in 2:27.53, followed by City of Salford’s Cara Tohill in second and City of Leeds’ Mischa Comrie in third.

Isabelle Jopson set the quickest time of all the Women’s 200m Butterfly finals to earn the gold medal in the 17 Years age group.

Northumberland and Durham’s Christ Wilson claimed another medal for her club with silver and Swansea University’s Jennifer Green finished third.

Hat-trick of golds for Marcal Whittles

Chelsea and Westminster’s Edward Marcal Whittles made it a hat-trick of gold medals, taking his third win of the competition in the Men’s 16 Years 200m Butterfly final.

The 16-year-old finished more than three seconds ahead of his nearest competitor following his time of 2:08.30.

Bromley’s Samuel Lander got his hands on his first medal of the competition with a silver medal-winning time of 2:11.69 and Kieran Turnbull of Northumberland and Durham finished third.

Hugo Young set a massive personal best as he opened up a gap from the rest of the field down the home straight in the 13/14 Years final.

The 14-year-old Swim Bournemouth athlete recorded a time of 2:17.08. He was joined on the podium by City of Wakefield’s Thomas Wooffindin and City of Birmingham’s Joseph Box respectively.

Miles Kinlen was the man to beat going into the 15 Years final, and he couldn’t be beaten – leading the race at every turn.

He took four tenths off his personal best to record a time of 2:13.42. It was tight for the remaining medals as City of Bristol’s Jack Brown touched 0.60 ahead of Cheadle’s Ethan Walker.

Oliver Jones swam a superb final 50m in the 17 Years final to take gold and add to his medal tally. The Poole swimmer also won the 100m title on the second day of competition.

In the 18 Years and over final, City of Sheffield’s Adam Wilson added gold to his bronze medal but was pushed all the way by Matthew Wright of Team Luton.

Wright was less than half a second behind Wilson, with Jay Manners another 0.53 behind for third.

Fingertip victories in the 50m Breaststroke

Congratulations Josie! An amazing swim to take Gold in the 12/13 years 50m Breaststroke ⁦@Swim_England⁩ National Summer Meet! A fantastic achievement as the only 12 year old in the final and dropping nearly 2 seconds from her PB! 🦡💥 pic.twitter.com/zMkaGzYDBh

Josephine Lawn of Bromley took the Women’s 12/13 Years 50m Breaststroke gold from out in lane three.

She touched the wall just ahead of the eventual silver medallist, Imogen Myles of Sevenoaks, who made it her second silver of the meet. City of Cambridge swimmer Yan Ting Emily Pak won bronze.

Portsmouth Northsea’s Hannah Day had to stretch out to win gold in the 14 Years final as the race finished with less than a second difference between first and third place.

It was a similar story in the 15 Years final, but this time there was just over a second between first and eighth.

Newcastle’s Scarlet Tinwell was the winner and alongside her on the podium were Hatfield’s Megan Gray and Evesham’s Daisy Gregg.

Just over a tenth of a second was the margin of victory for Eloise Wade of Newbury in the 16 Years final.

She beat Hatfield’s Lily Blount to the touch and Chelsea and Westminster’s Emily Leonard finished in third.

Royal Wolverhampton’s Louise Edmunds finished strongly to clinch the 17 Years and over national title in 33.34.

Next to touch was Maidenhead’s Jessica Gillatt (33.72) and just 0.02 behind her was Street and District Swimming Club’s Cora Lanham (33.74).

Thirsk’s Benjamin Dale-Wood was agonisingly close to a silver medal, coming 0.01 behind the Beckenham swimmer.

William Gowler followed the trend as he added another gold to Middlesbrough’s total in the 15 Years final.

He finished three hundredths of a second ahead in an unbelievably close final which saw Chalfont Otters swimmer Noah Wheeler clock a time of 31.18 and RTW Monson’s Tom Hawkins a time of 31.27.

A confident Fred Carter was delighted following his win in the 16 Years final. The Swindon Dolphins athlete was the only swimmer to duck under the 31 second mark with his 30.68.

In the 17 Years final, there was only 0.09 separating the top three. Joseph Bavey of Newmarket came out on top against Bromley’s Afuwape Oladele-Ajose in silver and Exeter’s Callum Frith in bronze.

The quickest times were clocked in the 18 Years and over final as Alexander Curry charged to victory in 29.32.

Swimmers double up on national titles

Massive well done to Grace Macdonald adding the 100m gold to her collection in the girls 12/13 years backstroke events.

Last races tomorrow of the season starts tomorrow for our swimmers. Some outstanding swims. Great Job all pic.twitter.com/eh3EHkEPKp

In the Women’s 12/13 Years 100m Backstroke final, Grace Macdonald completed the double as she added the 100m title to her 50m gold medal.

Rigg still came away with her fifth medal of the competition after finishing in the silver medal position ahead of Northumberland and Durham’s Holly Gillie.

Grace Greenhalf was the quickest from the heats, but it was Hannah Morris came out on top in the 15 Years final.

Morris was ahead at the turn and opened up a lead down the home straight to earn her place on top of the podium. Greenhalf took silver and City of Coventry’s Brooke Fisher won bronze.

Martha Sell secured her third medal and second gold after victory in the 16 Years age group. The City of Bristol swimmer managed a time of 1:05.83.

Windsor’s Katie Ford was just over half a second slower and clocked in at 1:06.43, followed by Nova Centurion’s Rose Gubbins.

The 17 Years and over final saw Taunton Deane’s Madeline Soper add her name to the list of swimmers who had doubles up on national titles.

The 19-year-old beat City of Cambridge swimmer Sophie O’Keeffe and Chesterfield’s Elise Collins who finished in second and third respectively.

Aquiles Bello of Elmbridge opened his account at the Speedo National Summer Meet with a win in the Men’s 13/14 Years 100m Backstroke final.

Watford’s Rafferty May and Hatfield’s Oliver Baskerville joined him on the podium.

Edward Ormbsy was victorious in the 15 Years final with a time of 1:01.46 and RTW Monson’s Hawkins bettered his finish from the 50m Breaststroke to take silver this time around.

Northumberland and Durham’s Joseph Edgar was delighted with his finish as he took home the bronze medal.

It was a lunge to the finish in the 16 Years final as Newcastle’s Matthew Mahoney was crowned the winner.

Samuel Ryan emerged as the silver medallist and after setting a new personal best by around two seconds in the heats (1:01.31), Bolton Metro’s Mark Toppsett was just outside that time in the final as he earned the bronze medal.

There was another personal best and another gold medal to add to Euan Macleod’s collection in the 17 Years final.

The swimmer from Shiverers managed a time of 1:00.47 to finish before City of Leeds’ Cohen Stephenson. In third was Winchester’s Fraser White.

In the 18 Years and over final, Jolan Bennett of Stockport Metro lowered his personal best by around four and a half seconds to finish in 57.88.

Just 0.10 behind him was William Ellis for silver and Derventio’s Ethan Lawton was the next to the wall for third place.

Another one-two for City of Sheffield

After lowering her personal best considerably in her heats swim, Brighton’s Hannah Capron went on to win the Women’s 12/13 Years 100m Freestyle title.

It was a convincing win by Capron to take the gold medal. Her winning time was just outside the time set in the heats.

Joining her on the podium was City of Sheffield’s Willow Harrison and Camden Swiss swimmer Alexandra Nurney.

It was a well-timed finish from Emma Price in the 14 Years final as she took the lead in the final few metres.

Isobel Liptrot of Wigan Best went sub-60 for the very first time to earn herself another silver medal, while City of Norwich’s Katerina Di Maria was third.

There was another one-two for City of Sheffield, this time coming by way of Molly Baker and Erin Tankard.

Baker clinched her fourth gold of the competition as she took her place on top of the podium followed closely by her teammate. Droitwich swimmer Eva Sherrey joined the Sheffield duo on the podium.

It was a comfortable victory in the 16 Years final as Bracknell’s Jessica Humm opened up a clear lead.

Flitwick’s Francesca Baber beat TigersJersey swimmer Megan Hansford to the touch for silver, with Hansford taking bronze after an impressive swim from out in lane zero.

Rhiannon Bowen also continued her remarkable medal haul with another victory – taking the 17 Years and over title in 58.10.

It was the fifth medal so far for the Surrey University swimmer after a powerful performance.

Earning the silver medal was Zoe Cawsey (58.31) of Plymouth Leander, with the bronze medal going to Jennifer Horn. 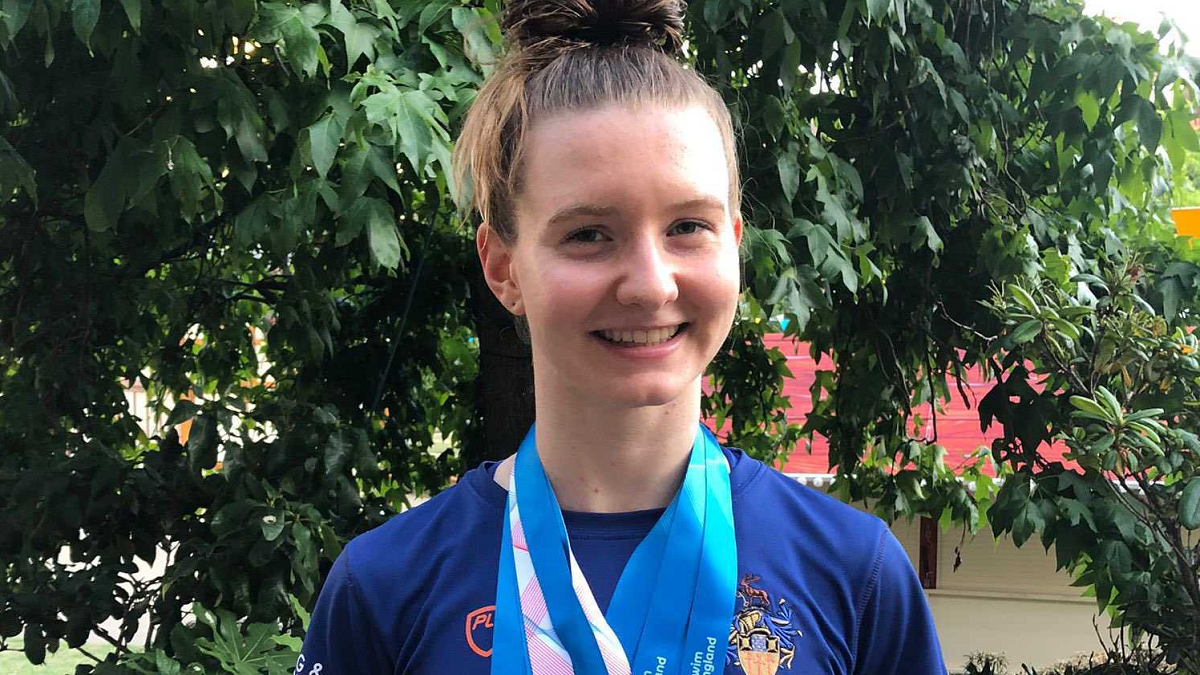 In the earlier sessions of day four, Kingston upon Hull’s S14 swimmer Owen Garsides took the Men’s MC 200m Freestyle crown with a total of 620 points.

In the women’s event, City of Salford’s S14 swimmer Chiara Fellone swam alone in her heat and scored 437 points after her time of 2:40.88.

Finishing ahead of him by just eight points was Hastings S10 swimmer Callum Pearson to take gold and in third was S8 swimmer Akaash Das.

S13 swimmer Imogen Dodds of Wellingborough won her fourth medal with a win in the Women’s MC 100m Butterfly event.

The Men’s 1500m Freestyle was also a heat declared winner event with the fastest time coming from City of Peterborough’s Rafae Shafi in the 17 Years age group. He finished in 16:37.72.

City of Salford’s Connor Hartley and Thanet Swim’s Oliver Pope were the silver and bronze medallists.

In the youngest age group, the 13/14 Years, Oscar Bellinger of Salisbury set the quickest time. Another City of Peterborough swimmer, Orlando Dearing, enjoyed success as he took silver and this time Charley King won bronze for Thanet.

Ryan Wall of City of Cambridge won gold in the 15 Years age group, followed by Oliver Greaves and Thomas Long.

In the 18 Years age group, home swimmer Finlay Chapman took the win ahead of West Suffolk’s Myles Turner and Oliver Etheridge of Atlantis.